In some crop production areas of Western Canada, soils with low pH can create challenges for growers, and impact yields and crop rotation options. For most crops, the ideal pH level is in the range of 6.2 to 6.8. Most nutrients are readily available at these levels, optimizing plant growth and improving crop competitiveness.

Acid soils are those having a pH of 6.5 or less. An estimated 6.3 million acres of soils in Western Canada have a pH of 6.0 or less and an additional 8.5 million acres have a pH of 6.1 to 6.5. According to Alberta Agriculture, Food and Rural Development (AARD), over 90 per cent of sufficiently acid soils that reduce alfalfa growth occur in Alberta, including 1.35 million acres in the Peace River Region of Alberta and British Columbia.

When soil pH is less than 6.0, the growth of acid sensitive crops, such as alfalfa and sweet clover, is reduced. Barley is considered to be moderately sensitive, and growth is affected when pH is less than 5.8. Canola, wheat and corn are slightly more tolerant of soil acidity than barley to 5.5, while oats and the forage grasses, such as timothy and creeping red fescue, are very tolerant and can be grown successfully at a soil pH of 5.0.

“In much of the area south and north of Edmonton and into the Peace Region, many of the soil tests indicate a soil pH of less than six, often getting down to between 5.3 and 5.6 and as low as 4.8 to five,” Dan Orchard, Canola Council of Canada agronomy specialist for north-central Alberta says. “Canola crops are fairly tolerant at these soil pH levels; however, crops like barley may be almost impossible to grow at a lower soil pH. As well, some fertilizers like anhydrous ammonia and elemental sulphur are a bit more acidic and can contribute to lowering the soil pH over the longer term.”

Growers can consider an application of agricultural lime or wood ash to raise the pH. “Although it is challenging to alter the pH, for example it may take seven or 10 or more tonnes of lime per acre to raise the pH one point depending on soil type, one application will last for years,” Orchard says. “Therefore, the cost can be amortized over several years and, once corrected, it will be a long time before it will need to be corrected again.”

John Heard, soil fertility extension specialist with Manitoba Agriculture, Food and Rural Development (MAFRD) notes there are few areas in Manitoba with low soil pH. There are a few pockets mostly on the east side of the province, and a few other isolated locations. “In northwestern Ontario, there have been many trials with wood ash applications, which proved to be very effective liming material and much cheaper than lime,” Heard says. “Similar research in an acid pocket of soil in northwestern Manitoba, just west of Dauphin, has shown wood ash to be effective in increasing productivity. Precision farming techniques, such as intensive soil sampling, has also identified acidic areas in well-drained sandy fields in the Carberry area. For soils that are closer to neutral, such as 6.5 pH, liming is not required and may actually cause detrimental effects, such as on table potatoes where the bacteria that causes scab prefers higher soil pH.”

Along with improved crop production, there can be other reasons to increase soil pH. For some crops like soybeans, the crop may not require a higher pH, but the rhizobium bacteria that fix nitrogen need a higher pH for growth and survival. Soil pH can also affect the residual characteristics of some herbicides.

“For example, some of the Group 2 herbicides, such as Pursuit and Odyssey; their persistence in the soil is longer in acid soil,” Heard says. “Therefore, a proper soil pH and moisture conditions are required for the orderly breakdown of products to prevent carryover.”

Soil and crop response
Wood ash, the calcium carbonate-rich residue remaining from the combustion of bark, sawdust and yard waste for energy generation for forestry product operations, is an effective liming material on acid agricultural soils. Many of these forestry operations are in the northern Prairies, where a large percentage of highly acidic soils are located.

Researchers with the University of Alberta and Agriculture and Agri-Food Canada (AAFC) conducted several experiments in northwestern Alberta at Beaverlodge to determine the effects of wood ash and lime, applied at an equivalent calcium carbonate rate, on soil properties, nutrient availability and crop production from 2002 to 2005. A separate study investigated the effects on soil microbiological properties.

In the four-year study, barley, canola, and field pea were grown in rotation every year. The soil amendments were applied once in the first year on a clay loam soil with an initial pH of 4.9. Wood ash was applied at a calcium carbonate rate of 6.72 tonnes/ha and compared with an equivalent rate of agricultural lime, plus a control without lime or wood ash. Overall, the soil pH was increased by about two points to 6.8 on average.

“Wood ash proved to be a very good amendment and all of the crops in the trials benefitted from the higher pH levels,” Newton Lupwayi, research scientist with AAFC in Lethbridge, Alta., says. “In this study, wood ash was as effective as agricultural lime in increasing soil pH, available nutrients, soil aggregation and crop yields. Lime works very well too; however, it can be quite expensive. So for those growers with access to wood ash, such as those in northwestern Alberta, they can use that as an alternative to a lime application. Wood ash is quite dusty to apply, so if there was a way to convert ash to a granular product, it would be an advantage.”

Averaged over four years, the application of wood ash increased grain yields of barley, canola and pea by 49, 59 and 55 per cent, respectively, compared to a corresponding increase of 38, 31 and 49 per cent by agricultural lime (see Table 1).

“Wood ash has an advantage over agricultural lime in containing a significant amount of P and other nutrients,” Lupwayi explains. “The study also showed that wood ash also increased soil P availability more than lime, bringing soil pH to the optimum range for root growth and increasing P solubility.”

The effect of wood ash and lime application on pH and available phosphorus (P) was greatest in the 0- to 5-cm depth, less but still significant in the 5- to 10-cm depth, and not significant below 10 cm. Wood ash also significantly improved the soil microbiological properties, and after four years of application, the levels of microbial biomass carbon were still almost doubling in bulk soil.

“In acid soils, crops really struggle. So by improving the soil pH through an application of wood ash or lime, crop production, soil quality and soil microbes all improve,” Lupwayi says. 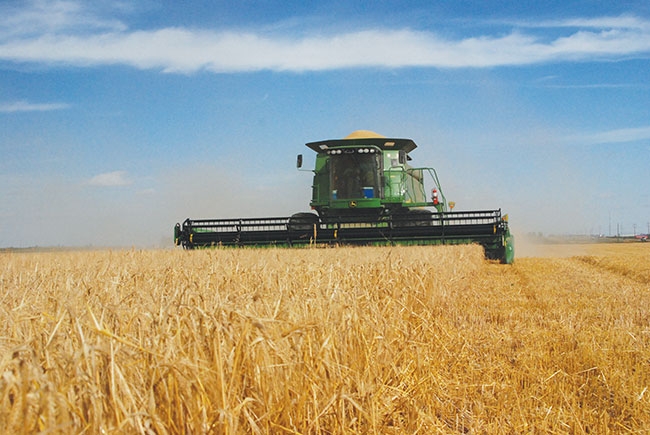 Barley growth is affected when pH is less than 5.8 and can benefit by increasing pH levels with wood ash. In some crop production areas of Western Canada
Print this page