Features Agronomy Tillage
Loss of agricultural land on the Prairies

Our most important sustainable natural resources on the Canadian Prairies are soil and water. Both are essential to produce food to sustain human life. The dwindling quality and availability of freshwater supplies have received increased attention in recent years, but the importance of soil is not recognized by society. The land and our soil resources are critical to maintaining a viable society.

Sprawling city developments, rural residential developments, expanding rural industrial developments and the energy sector are all constantly taking agricultural land out of production. Most cities across the Prairies are rapidly expanding, permanently removing land from agricultural production. As an example, the city of Calgary presently occupies an area of almost 600 square kilometres with a population of 1.1 million people. In 2012, Calgary grew by 35,000 people, or 3.2 per cent. At a continued population growth rate of three per cent annually, in 37 years Calgary could have a population of 3.6 million people in 2050 and occupy a land area of 1,800 square kilometres. Almost all the best agricultural land in southern Alberta, which is Class 2 land, is adjacent to Calgary  Much of this land could be lost from production in the next 40 years if present growth trends continue. Most other cities across the Prairies are also located on productive agricultural land and are also growing rapidly, consuming significant tracks of prime agricultural land.

Alberta and Saskatchewan’s best agricultural land is Class 2, with the majority located in the Black soil zone. Alberta and Saskatchewan have no Class 1 land as defined by Agriculture Canada’s Land Suitability Rating System, which is based on soil type, climate and location. A sizable portion of Class 2 land is under threat from urban expansion, country residential development and industrial developments. For example, Fig. 1 shows the concentration of rural residences in southern Alberta in the Calgary, Lethbridge, Medicine Hat and Brooks areas, which contribute significantly to land fragmentation and removal of land from agricultural production.


The oil and gas sector also pose threats to agricultural land. There are about 120,000 abandoned well sites on agricultural land in Alberta that need to be reclaimed. Reclamation procedures can greatly improve crop production potential; however, the soil cannot be returned to its original state. There is an estimated 110,000 kilometres of pipeline crossing farmland in Alberta. In many cases, crop production on the disturbed pipeline right of way areas is only 60 to 80 per cent of pre-pipeline production. The land is still available for cropping after pipeline installation but crop production is reduced as a result of the significant soil disturbance, which affects soil physical, chemical and biological properties.

As best, agricultural lands are removed from production, there are opportunities to develop new lands for production. Unfortunately, lands lost from production are often Class 2 and 3 lands, and new land that could potentially be developed for production are often in the northern agricultural fringe areas. These lands are mostly Class 4 or lower and have moderate to severe crop production limitations. These lands require a higher level of management, often have higher input costs and have lower crop production potential due to soil and climate limitations.

Preserving agricultural land for crop and livestock production is paramount for food production. As non-renewable energy resources are depleted, future generations will likely need to grow crops not only for food and fibre but also for bio-energy sources. 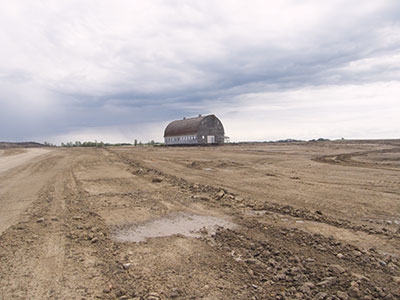 A half-section of prime agricultural land south of Edmonton stripped for development. Our most important sustainable natural resources on the Canadian Prairies are soil and water.