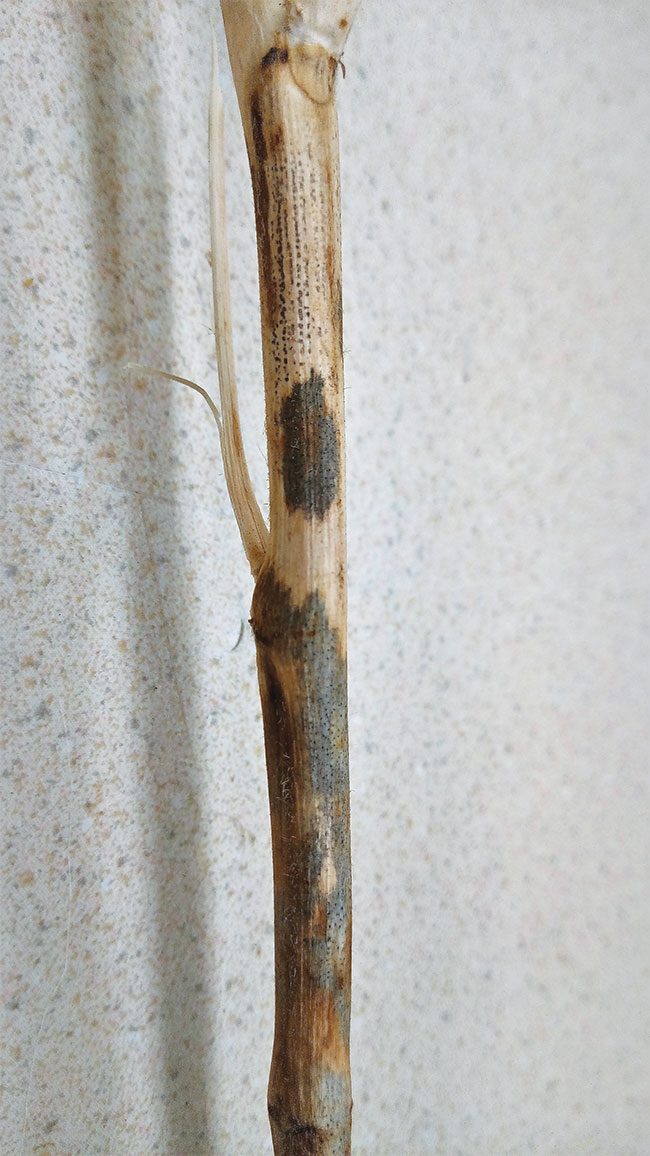 While soybean acreage in Manitoba has declined from its high of almost 2.3 million acres in 2017 to about 1.3 million acres in 2021, the relatively high acreage still means that the crop is grown frequently in rotations. This brings the potential for increased risk of insect and disease.  A University of Manitoba research project looked at how crop rotation affected soybean root rot.

“The main disease-related question in this initial project was whether the frequency of soybean in the rotation increases the incidence or severity of any important diseases,” says Fouad Daayf, professor in the department of plant science at the University of Manitoba.

The main objective of the disease portion of the project was to investigate the effect of different crop rotations on soybean diseases in experimental plots at Carman, St. Adolphe and Melita, Man. The research was part of a larger crop rotation study by Daayf’s colleague Dr. Yvonne Lawley. Daayf’s team members who contributed to this research also included his research associate, Dr. Ahmed Abdelmagid, his technician Lorne Adam, and summer student Aymen El-Mazini.

The fields were visited during different growing stages from V1 to R8, and 10 plants were collected from each plot and brought back to the lab for analysis. The first step was to visually assess the soybean roots, stems and leaves for disease, and to calculate a severity rating. Next, suspected pathogens were isolated, and the diseases were then confirmed in the greenhouse.

Fusarium sp. most prevalent
Of the pathogens identified, Fusarium sp. accounted for 70 per cent of the isolates. The next highest pathogen causing disease was Diaporth/Phomopsis complex at 13 per cent.

Disease incidence of Fusarium sp. reached 100 per cent at Carman, 50 per cent at St. Adolph and 100 per cent at Melita. Of the Fusarium species identified, Fusarium oxysporum was the most isolated species from soybean roots at 50 per cent of the isolates. “We have to keep in mind that this study was not set to determine the best crop rotation combination for soybean disease control, but rather to take advantage of a crop rotation that had already been in place to test agronomic traits,” Daayf explains.

The highest root rot levels were found at Melita with 80 per cent severity in the continuous soybean rotation compared to the lowest severity at St. Adolphe at 6.8 per cent in the wheat-canola-corn-soybean rotation.

“There could be many reasons, but a specific study looking into this could shed more light on these differences,” Daayf says.

Daayf says it is hard to predict if the tighter rotations would allow the build-up of root rot severity over time because there are many variables that can impact disease development. These include the complexity and number of the pathogens involved, their ability to adapt to each combination (cross-pathogenicity) of crop rotation and to build-up inoculum in the soil, as well as the effects of the environment over time. Similarly, because Fusarium spp. cause root rots in many different crops, it is hard to predict how longer rotations will impact root rot severity.

“Keep in mind that the adaptability of each pathogenic strain may depend on its history of crops it went through in the years prior to infecting soybean or canola or corn. That makes those strains sometimes different in their abilities even when they are from the same Fusarium species. If this sounds complex, it’s because it really is,” Daayf says. “When you add the effects of the environment, then it becomes even more fun to decipher!”

Plectosphaerella cucumerina, a potential latent infection that may live its life in the plant without expressing visual symptoms, was also identified in the soybean tissue.

Daayf continues to work on the samples that were collected in order to further characterize the pathogens present. The basis of the work already completed will allow the researchers to set new research perspectives such as determining which of these pathogens might be of more prominent importance, or how to work on their future detection/diagnosis.

The overall results suggest that root rot pressure is more variable and generally riskier when
soybeans are grown in a tight rotation, compared to growing soybeans in a more diverse rotation. Future research on the effect of crop rotations on soybean diseases will help soybean growers choose better crop rotations, as there is limited information on the effect of rotations on soybean diseases in Canada.