A seed treatment is a vital and effective product, so long as it stays on the seeds where it can do its work. When it is released into the surrounding environment, however, it can cause significant political and environmental concern. 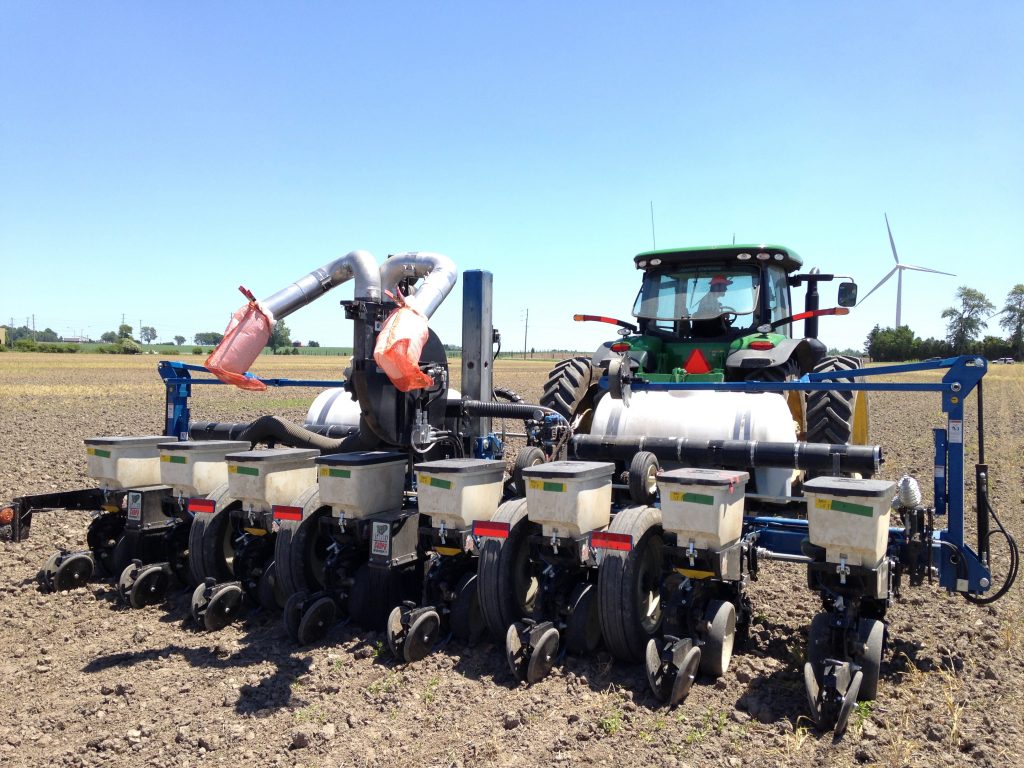 Seeder with sampling bags attached to the exhaust outputs. A seed treatment is a vital and effective product

In July 2015, Ontario rolled out strict new regulations governing the sale and use of neonicotinoid-treated seed in an effort to limit non-target effects. University of Guelph researcher Art Schaafsma says legislation does nothing to solve the underlying problem of seed treatment pesticide drift, an issue that extends far beyond just neonicotinoids. Equally important, he notes legislation would not be necessary at all if farmers and equipment manufacturers made basic adjustments to planters.

“If everything stayed on seed and went in the ground and there was no exhaust, we wouldn’t be having a discussion about chemical escape,” Schaafsma says, who is the lead researcher on a three-year study into chemical escapes. “What we confirmed in the study is that 90 per cent or more of non-target exposure to seed treatment chemicals comes from dust abraded from the seed. We have a seed treatment pesticide drift problem, not limited to neonicotinoids.”

While farmers and politicians may disagree on the impacts of neonics on pollinators and other insects, there is no question that the seed treatment chemicals do not always stay where they should. According to Schaafsma’s research across multiple fields, as much as to 2.4 grams per hectare (g/ha) of clothianidin, and in extreme cases, almost 13 per cent of the seed treatment applied – was collected from commercial pneumatic planter exhaust. Because pesticide dust is a very fine particulate, it can travel long distances via wind, spreading its non-target effects over vast swaths of land.

“We’re finding neonics at low concentrations virtually everywhere. Take a soil sample, even in a conservation area where no one has ever applied it, and it’s there. There is no surface water – ditches, streams, puddles – where it doesn’t exist. That’s disconcerting,” Schaafsma says. “How did it get there? It all tends to trace back to the exhaust of planters.”

Researchers generally agree that pesticide dust occurs due to two causes: seed-to-seed friction from seeds jostling together prior to planting, and abrasion caused by anti-clumping talc. Inadvertently, Schaafsma and his team identified a third, even more significant cause of pesticide dust: field dust.

Schaafsma  and his team studied a new anti-bridging compound (a replacement for talc) that was waxier to reduce abrasion. “In the lab, it looked very good, we were getting a 95 per cent or more reduction in pesticide dust. But then we took it out to the field and were surprised with how much less effective it was. Instead of a 95 per cent reduction, it was more in the order of 35 to 50 per cent.”

At first, the researchers could not understand why pesticide dust increased so markedly in field conditions. Then, they realized a key difference between lab and field. As a planter moves through a dry field, it stirs up clouds of dust from the ground. As the seed meter vacuum draws in the grit-filled air, seed coats are aggressively abraded.

The team looked at lubricant options to minimize rubbing, and at ways to make the treatment coating hardier and more able to withstand abrasion. Schaafsma says strides are being made on both of these fronts, thanks to efforts by multiple chemical companies. However, those improvements do not address the issue of field dust.

“You can try to use a better lubricant, you can try to develop a better seed treatment, but the other thing that really needs to be resolved is what do you do about the dust? You have to deal with the dust stirred up in the field,” Schaafsma continues.

In fact, the research team found that minimizing field dust contact with treated seeds is not all that difficult. Simply putting the air intake system up higher, in a forward position on the machine and adding a simple air intake filtration system means significantly cleaner air is pulled into the machine. Less grit into the system means much less chemical out the other side: 98 per cent less chemical, in fact, according to Schaafsma’s study.

“There are a number of different ways to deal with [field] dust going in and [chemical] dust coming out. These take time and money but they are very feasible,” Schaafsma says. “For an investment probably in the order of a couple thousand dollars upfront and maybe a couple hundred dollars a year in filters, it would be possible to make changes to a planter to virtually eliminate pesticide dust.”

With no immediate incentive plan to upgrade equipment, many growers will balk at the suggestion of another production cost. However, not proactively stepping up may bear heavier consequences.

“Even if I didn’t think it was an issue [myself], there are enough forces at play that argue chemical escapes are an issue. Pressure is going to come from the public. Rather than wait for the next legislative fist, we as agriculturalists should take the initiative.”

Other than proactively negating the need for legislated limitations, Schaafsma says there is another key reason to better manage chemical escapes.

“If you use neonicotinoids as the case study, enough chemical escaped from the seed to cause non-target effects. I don’t think it’s acceptable for me to be planting corn seed and to be blowing pesticide dust into the air needlessly. If there is a reasonable tool to mitigate that, we should use it.”

While farmers have an important role to play in minimizing seed treatment dust, Schaafsma says government might do well to rethink both its method and its intended outcomes surrounding chemical escape control.

“If, in fact, we agree that pesticide coming out of vacuum planters is a concern – and that’s the first debate one must have – then the way to deal with it is by limiting emissions. If you created a rule to restrict emissions from exhaust, that seems more sensible than trying to restrict where those chemicals can be used.”

Do equipment and chemical companies hold the solution to seed treatment escapes?
Multiple companies are stepping forward with chemical and equipment improvements designed to minimize chemical escapes, but not everyone views the efforts as sufficient.

Bayer Crop Science recently unveiled a prototype cyclone called SweepAir that reportedly cleans as much as 99 per cent of emissions from exhaust air. Syngenta reports the after-market dust deflectors it trialled with growers in 2014, 2016 and 2017, which European trials show can reduce off-field dust movement by 50 to 90 per cent, had “overwhelmingly positive” reviews from producers.

Neither the SweepAir nor Syngenta’s dust deflectors have made it to commercialization in North America.

Hoekstra says science-based, collaborative efforts by all of the industry are the key to overcoming complex issues like pollinator health. “We have been fairly successful at moving the pegs forward,” he says.

Evidence of these important steps forward, he says, can be seen in two Pest Management Regulatory Agency (PMRA) reports. The first states that incidents involving honeybees dropped 80 per cent during 2014, two years before regulations for neonicotinoids came into effect. The second, more recent report shows that seed treatments, including neonicotinoids, are safe when used to label recommendations.

“These are first steps. There are certain things we’re looking at…including clean air technology. We’ve collaborated with [researchers] and others, sharing schematics to support and advance the conversation. We take it very seriously.”

Not everyone is convinced substantial enough change is occurring. “I do want to point fingers at the equipment manufacturers, who really have avoided doing anything worthwhile,” Schaafsma says. “It’s been a frustrating time trying to reach them and work with them. With only Ontario squawking, and with Trump unravelling the EPA, it’s really not a big enough market force to drive any real change. It would take emissions regulations to change that.”

He points out that equipment manufacturers “independently and reluctantly” came up with a new ISO engineering standard for new equipment that includes directing exhaust towards the ground and reducing exhaust air velocity. While this deflection does successfully direct dust towards the soil surface, the exhaust remains dirty.

In fact, Schaafsma says, “there are no data to support whether the technology actually reduces emissions and exposure.” Schaafsma believes that, rather than legislating limitations on usage, government should more actively support changes to equipment that are proven to reduce dust escape.

“If the government wants to be serious about this, why wouldn’t they support these kind of equipment upgrades with a program that supports growers to convert old planters and rules that require minimal emissions from new planters?” Schaafsma says. “It shouldn’t all be foisted on the grower.”


Related
Recommendations to avoid dust generation at planting
Seed treatment guide 2018
Syngenta receives registration for Fortenza insecticide as a seed treatment on soybeans
What role do drones have on the farm?