Research finds plenty of disease but not much impact on faba bean. 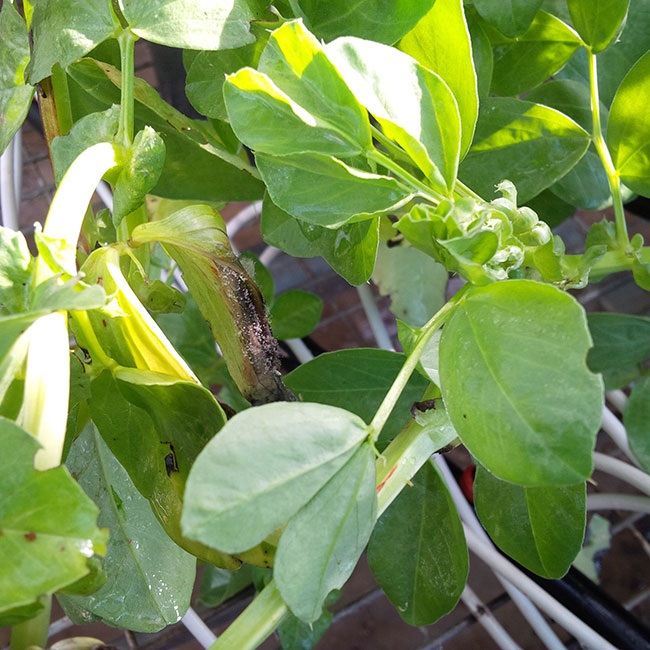 So far, so good. That’s the good news on chocolate spot disease affecting faba bean crops in Western Canada. While chocolate spot has been widely found on the Prairies, a four-year research study found only minor impacts on faba bean production.

“We found chocolate spot in every field that we surveyed but the incidence and severity were quite low,” says Syama Chatterton, research scientist with Agriculture and Agri-Food Canada in Lethbridge, Alta.

Chocolate spot disease on faba bean is caused by two different pathogens. Botrytis fabae is considered more aggressive and destructive. Botrytis cinereal is less aggressive, and can also affect lentils and other pulses. Other pathogens, such as Alternaria spp., Fusarium spp. and Stemphylium spp. can often be found at the same time in the field. All of these species can cause leaf spotting on faba bean.

In 2015, when acreage of faba bean was expanding on the Prairies, very little research on conditions favouring diseases of faba bean had been performed in the area. In response, Chatterton received funding for a three-year study looking at the incidence and severity of chocolate spot and other foliar diseases on faba bean in Alberta and Saskatchewan. Her collaborators were Sabine Banniza at the University of Saskatchewan and Robyne Davidson, pulse research scientist formerly with Alberta Agriculture and Forestry and now with Lakeland College. Funding was provided by the Saskatchewan Ministry of Agriculture and the Canadian Agriculture Partnership, Saskatchewan Pulse Growers, Alberta Pulse Growers and Western Grains Research Foundation.

The research also looked at the environmental conditions leading to Botrytis spore release and infection in the field and the effect of leaf wetness duration, temperature and inoculum concentration on disease development.

Overall, 103 commercial faba bean fields were surveyed from 2017 to 2019 in Alberta and Saskatchewan. All but one faba bean field surveyed had foliar lesions at the time of surveying during flowering in late July to mid-August. Disease severity (DS) was very low across all fields, with small lesions covering one to 10 per cent of the plant surface in 2017 and 2018. Disease severity was higher in 2019 with some coalesced lesions, covering 21 to 31 per cent of the leaf surface and some defoliation. Average disease severity ranged from 1.7 to 2.7 (on scale of 1 to 5, with a minimum average DS of 1 to a maximum of 5).  There were always more lesions in the lower canopy compared to the upper canopy.

“The symptoms can look really bad with these big black blobs on the leaves but we never really saw the disease take off to the point where it was taking over the entire plant,” Chatterton says.

“One of the most interesting findings was the high level of Stemphylium and Alternaria species on faba bean. I think what is happening is that those pathogens are piggybacking on Botrytis lesions to infect the faba bean plant,” Chatterton says. “Those two pathogens are not considered to be a problem on faba bean, so there needs to be further research to see what role they play in disease development.”

There was no difference in the susceptibility of a tannin versus non-tannin faba bean cultivar to chocolate spot.

The research found that that temperature and dew point temperature significantly affected disease development. Cool night time temperatures of 10 C to 15 C and exposure to dew point temperature of 5 C for three hours favoured infection. However, weather could not be directly correlated to disease severity, as there was too much variability in the patterns from year to year. 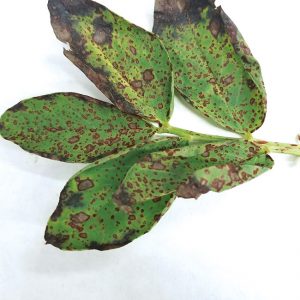 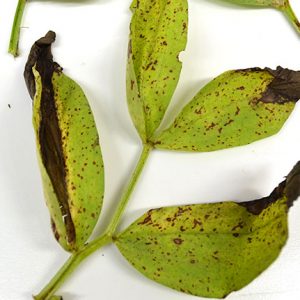 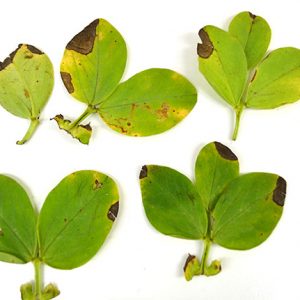 Fungicides haven’t provided a large benefit
Over five years from 2016 through 2019, and at four locations in Alberta and Saskatchewan, Davidson looked at the impact of foliar fungicides applied at 50 per cent flowering on disease severity and yield. Two years – 2017 and 2018 – were drier and had lower chocolate spot severity, while 2016, 2019 and 2020 favoured disease development.

“Generally, I would say that fungicides weren’t that effective as a whole,” Davidson says. “Visually, disease severity was lower with fungicide application but I didn’t see much of a yield increase. When I crunched the numbers at eight to nine dollars [per bushel] faba beans, the economics didn’t work out.”

Davidson says that chocolate spot lesions can look bad, but because the disease generally develops later in the growing season, and faba bean plants are fairly robust, losing some leaves doesn’t seem to impact yield. If a grower does decide to apply a fungicide, leaving a check strip to compare yield and economics would be a good idea, given the results of this research.

“In 2020, we had faba beans growing six- to seven-feet tall. There was definitely chocolate spot, but it didn’t seem to have much impact on the faba beans,” Davidson says. “We’ve tried to find out if the chocolate spot problem is really a problem, and to this point, it probably isn’t, but that might change if faba bean acreage goes back up or there is a shift to the more aggressive Botrytis fabae pathogen.”