An integrated approach can reduce the amount of inoculum and extent of infection. 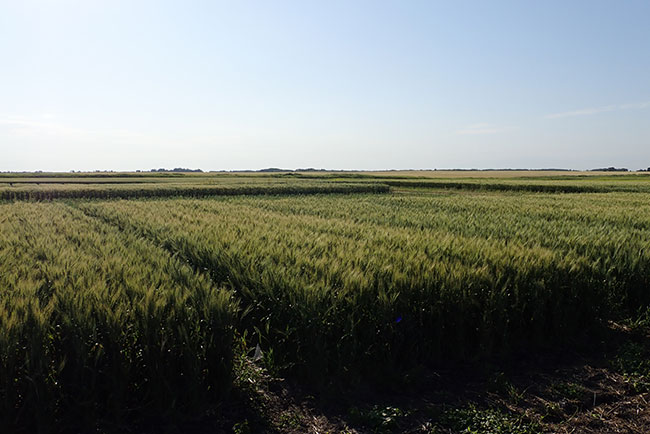 “For growers, current solutions related to resistance and fungicides only provide suppression of FHB at best, prompting some to re-evaluate wheat as a crop of choice,” says Kelly Turkington, plant pathologist with Agriculture and Agri-Food Canada (AAFC) in Lacombe, Alta. “In some areas such as north-east Saskatchewan, FHB can still cause significant yield and grade losses and DON to occur when the weather is favourable and F. graminearum is well-established, even when growers are using recommended strategies of a ‘resistant’ variety, avoiding host-in-host rotations and fungicides. In 2018, we initiated a five-year Wheat Cluster research project to evaluate how cropping system-based strategies may reduce the amount of inoculum and extent of host infection to improve productivity of spring wheat.”

The research experiments are divided into two projects, Test 91 and Test 94. The objectives are to study the impact of rotation, residue management, row spacing, seeding rate, and fungicide timing on leaf disease, FHB and productivity of spring wheat. AAC Brandon spring wheat, which is moderately resistant to FHB, was selected for the study. Nine study sites across Canada with a range of established issues with F. graminearum are included: Beaverlodge, Lacombe and Lethbridge, Alta.; Scott, Melfort and Indian Head Sask.; Brandon, Man.; Normandin, Que; and Charlottetown. Turkington is also leading a similar project investigating cropping strategies for FHB in barley.

“In Test 91, we are comparing rotations of one, two and three years between wheat crops, residue management and a single fungicide application at anthesis,” Turkington explains. “The residue management treatments include a comparison of intact stubble with the removal of straw and chaff, followed by chopping or mowing the remaining standing stubble. We are trying to determine if chopping the residue into smaller pieces facilities residue decomposition and faster disappearance of the source of disease, and whether there might be a synergistic effect when combined with crop rotations. The fungicide treatments include a single fungicide application using Prosaro XTR at the standard ideal timing of three to four days post-head emergence or anthesis compared with no fungicide.”

“Although we are including four different timing treatments for our research trials, the later stage may be outside the normal window and dual applications are not yet approved on the label, plus there are still pre-harvest interval considerations,” Turkington explains. “However, some recent research out of the U.S. and also from the University of Saskatchewan is showing that putting fungicides on too early can be an issue. The research is suggesting that going in with a later application, or a dual application, may have some benefits for improving the ability to manage DON. By comparing the different timings, we want to see if we can get similar or better control at seven to 10 days after anthesis with a single application as compared to at anthesis. Or in high-risk environments, if a dual application of one earlier at anthesis and a second one a week or more later might provide better control, as some of the U.S. research is showing.”

The current recommended timing for FHB fungicide is at anthesis, when 75 per cent of the heads on the main stems have visible anthers. Turkington notes that although this is certainly an important growth stage for F. graminearum, infection can occur any time after the head comes out of the boot through to the start of senescence. Applying an early application at 75 per cent head emergence still leaves 25 per cent of the heads without any fungicide contact or protection, and the chemical activity may not carry through to the late milk or early dough stages. Fungicides provide suppression at best, with about 50 per cent control of FHB and even less for DON. 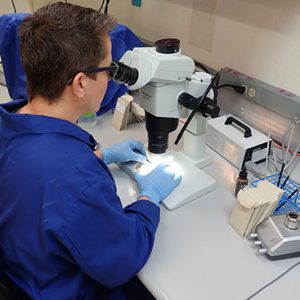 A plant pathology technician at AAFC Lacombe removes Fusarium-damaged kernels (FDKs) as part of the assessment of the impact of treatments on FDK severity for the Wheat Cluster FHB trials. 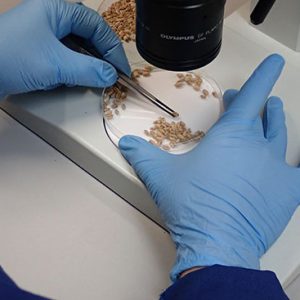 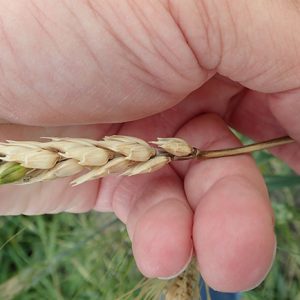 Symptoms of FHB in wheat showing a brownish dicolouration on rachis and upper stem.

“The optimal timing for reducing FDK and DON contamination will vary depending on weather conditions prior to and after head emergence,” Turkington adds. “Typically, the earlier the infection, the higher severity of symptoms, such as more kernel shriveling and tombstone Fusarium-damaged kernels, premature ripening of the infected portion of the head and a salmon-pink or orange-coloured fungus in the wheat spikelet. If infection is later, toward the mid- or late-milk stage, the symptoms become much less distinct, but the infection has still occurred and DON can still be produced. A later application may be more conducive at getting better suppression of DON production. The DON level of harvested grain is very important and at levels typically above one part per million is not accepted for milling quality or for feed grain for hogs. Testing for DON in harvested grain is important for grading and market acceptability. In addition, FDK symptoms can be also be caused by other Fusarium species that are not as big of a concern for DON production, or other leaf disease pathogens, such as Septoria nodorum leaf blotch or glume blotch. Therefore, testing for DON is important.”

Preliminary results for Test 91 and Test 94 for 2018 and 2019 have mostly been analyzed. However, some lab analysis results for DON and FDK assessments are still being completed due to COVID-19 delays, and results from early 2020 are limited. The conditions in 2018 were generally dry at most sites, and again at some sites in 2019, resulting in limited leaf disease FHB and DON development at most locations. The effects on grain yield were also limited, likely due to the low disease risk at most sites. Although results were variable across sites, generally the interaction for row spacing or seeding rate with fungicide timing were not significant. For sites where conditions were more conducive to leaf disease and FHB development, leaf disease severity was increased as seeding rate increased. Rotational effects and residue management results will be reported at the end of the project.

“From both Test 91 and Test 94, preliminary results show there is no real ideal timing to put fungicide on, with weather conditions prior to and after head emergence having the biggest effect,” Turkington says. “Generally, when conditions are dry and less conducive to leaf disease and FHB development, fungicide application even at different timings is of limited benefit for grain yield, DON management as well as reducing the amount of F. graminearum DNA in harvested grain. However, when FHB and leaf disease risk are increased, a fungicide application can help with leaf disease, FDK and DON, depending on conditions and early to mid-season leaf disease risk. When the risk of FHB is increased, fungicide application can help improve grade, but may not reduce FDK levels sufficiently to bring grades up to acceptable levels. Although dual applications tended to perform the best, differences with a single early application were not always significant, while a dual application may be less economical, is not on the label, and may cause preharvest interval issues.”

“Growers are encouraged to use the weather-based FHB forecasting systems and risk maps that are available in each province, along with field scouting in late July and early August,” Turkington adds. “These risk maps can be very useful in gauging the risk and helping to decide on timing of fungicide application if needed. Growers and consultants should start looking at the maps right at flag leaf to see if conditions are conducive for the pathogen to start producing spores. If the maps show a moderate to high risk at flag leaf, booting or head emergence, that suggests there is a high risk – don’t delay a fungicide application, which should likely be applied soon after full head emergence. If the risk is high from flag through to head emergence and is projected to continue for the next 7 to 14 days, then this might be a scenario where a dual application would be justified when registered. Growers who have had significant downgrading issues due to FHB and DON in the past should also then consider leaf spot diseases and leaf or stripe rust, depending on their location, and may want to consider putting on a fungicide around flag leaf emergence as a precaution.”

For now, growers are encouraged to use an integrated approach of fungicide applications and best agronomic practices for managing FHB and DON contamination. Consider crop rotations of at least two years between host crops, use the most resistant variety available, monitor harvested grain and seed intended for planting, and consider residue management. Collect representative samples at harvest and have them tested for F. graminearum and DON, to be better prepared for marketing options. Turkington expects that by the end of the project they will have better information about timing of fungicide applications, and there may need to be potential changes in mindset, chemistries and regulation for expanded windows of fungicide application for FHB and DON management. The project will continue for two more growing seasons in 2021 and 2022.