Recently, researchers have noted the increasing prevalence of leaf blotch disease in field surveys of commercial oat fields in central and northeastern Saskatchewan, as well as in oat breeding plots. Although crown rust disease is typically associated with oat in Western Canada, leaf blotch disease, which is a complex of different pathogens, has always been present at lower incidences.

“We started to see leaf blotch disease showing up in our breeding germplasm, with some lines more severely impacted by the disease than others,” says Aaron Beattie, assistant professor, barley and oat breeding program at the University of Saskatchewan. “In reviewing the results of recent oat field disease surveys with cereal pathologist Randy Kutcher here at the university, he estimated that in most years yield losses due to leaf blotch disease are typically five per cent or less, but in some years can be in excess of 10 per cent. After doing some research, we realized that no one was studying this disease in Canada, so we decided to initiate a project to determine whether or not we might be able to identify resistance and in the future add that into our oat breeding program.”

A three-year project was initiated in 2015 to study the leaf blotch disease complex in oat. “We started by doing some preliminary field disease surveys in 2014 and again this summer to try to identify the pathogens that make up this complex leaf spot disease,” explains Tajinder Grewal, research officer and project lead. “We surveyed about 30 fields each year in the Saskatoon, Melfort and Yorkton areas, and combined our results with those from Kutcher’s field surveys, which included a wider area across Saskatchewan.”

From the disease surveys, researchers have determined that leaf blotch disease of oat is caused by a complex of three main pathogens: Pyrenophora avenae, Stagonospora (Septoria) avenae, and Cochliobolus sativus. In the three-year project, the first two objectives are to develop artificial inoculation techniques for the pathogen isolates and to study the virulence variability of the pathogens in growth chamber studies. Once those steps have been completed, researchers can move to the next two objectives, which are to identify resistance in oat germplasm and to identify molecular markers linked to potential resistance genes.

“In the field surveys from the last few years, Pyrenophora avenae was the most prevalent pathogen of the three pathogens in the leaf blotch disease complex,” Grewal says. “Therefore, we will be focusing on P. avenae for screening oat germplasm, studying genetic resistance and marker selection work in this current project, and perhaps in the future will look at the others. We will be screening 32 oat germplasm breeding lines with the isolates to find the lines with the most resistance, as well as the most susceptible lines. Then we will be able to screen the populations to identify how many genes are involved in disease resistance.”

Once researchers identify the resistance genes, they will be able to map the genes and identify molecular markers that can be used for marker-assisted selection in the oat breeding program. “At the end of the project, we will know which genes are involved with disease resistance,” Grewal says.

“After we identify resistance in our germplasm, we will be able to include this as a regular part of our breeding program and down the road transfer the resistance into commercial cultivars,” Beattie adds. “Leaf blotch disease can cause yield losses in oat crops, as well as potentially lower test weights, which in turn impacts the milling quality. We recognize that oat is already a low input crop, so if we can keep it that way by providing disease resistant varieties, both growers and processors will benefit.”

Final project results will be available in 2017. The project is funded by Saskatchewan Agriculture Development Fund, Western Grains Research Foundation and the Prairie Oat Growers Association. 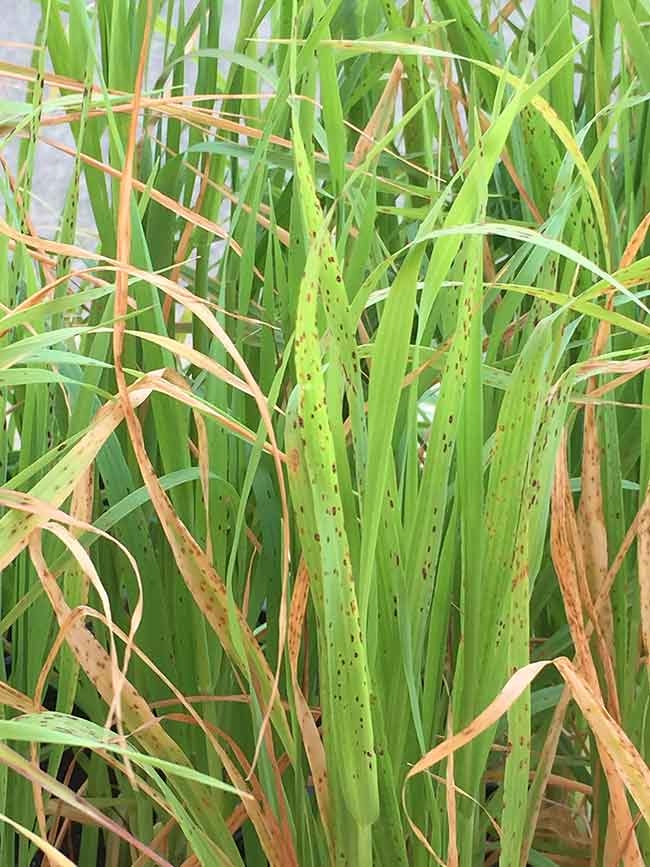