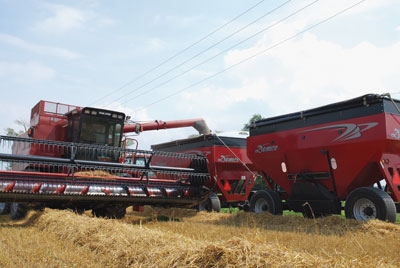 A survey is conducted that gauges trends, perceptions and practices among large commercial producers, yet the results and analysis are gathered for the benefit of companies that supply those producers. Such a survey and its results would be of little interest to any producers, right?

Actually, the 2010 Large Commercial Producers Study has plenty of information that would be of interest to many growers across Canada. The 280-page document, a joint effort of Agri Studies Inc. of Guelph, Ontario, and Ipsos Forward Research, contains an extensive amount of information on cropping practices, attitudes and perceptions about farming, Internet usage and business management skills. Even the role of government, at least where farmers are concerned, is outlined.

The online survey was conducted in March and April 2010, with 511 large commercial producers participating. Respondents received a $25 incentive as well as a copy of the executive summary. “And that summary was seen as being much more valuable to them than $25 ever would be,” explains Justin Funk, managing partner with Agri Studies Inc. “The reason is that this particular segment of growers was very interested in learning how they answered these questions in relation to their peers.”

The final results were presented to various chapters of the Canadian Agri-Marketing Association in mid-2011. The study is a followup to an initial 1994 survey by the University of Guelph, which was a replication of a similar project carried out by the Center for Agribusiness at Purdue University in 1993. In that inaugural survey, four categories were established, based on gross sales:

Key findings
Many of the summary items of the study were of little or no surprise to many. The results show, for example, that commercial farms in Canada are becoming larger, with the average farm size in all four categories nearly doubling when compared to sizes from the 1994 study; that 52 percent of growers consider increasing the size of their business as very important; that larger farms tend towards diversification, be they cropping operations moving to specialized or value-added production or cash crop farmers adding livestock to their operation.

Oddly what has not changed significantly is the attitude of most farmers. “There’s always going to be this group that sees farming as a business, and there’s always going to be a group that sees it as a way of life,” outlines Funk. “But there is this rather large chunk in the middle (66 percent) that says, ‘to me, farming is both a business and a way of life’ – and that is regardless of size. There was no evidence to say that a larger farmer is going to answer that question any differently than a smaller farmer.”

What does stand out to Funk, who made the presentations to the CAMA chapters along with his father, Dr. Tom Funk, formerly a professor at the University of Guelph, is that such a balanced perspective of “farming as a business and way of life” provides a detailed look at people with an important set of goals and objectives to achieve. Those goals and objectives provide suppliers with the opportunity to help those growers get where they want to go.
And that is where the study offers not only a significant value to the suppliers but also a reflection and guideline to growers. Funk sees the study’s results as a benchmark – identifying Point A in 1994, then Point B in 2010 – and based on those two points of reference, can forecast conditions in five to 10 years for a Point C with a better, more-informed perspective. “And if we’re fairly confident in where that point is going to be in the next five to 10 years, then we can develop strategies that can help us meet the needs of the market in that period of time,” says Funk. “This is a study about buying behaviour and attitudes of the large commercial producer. In that, we are measuring certain pieces of demographic information, because this allows us to draw important relationships between who these people are and what they want.”

Other key points of interest from the study include:

Is a quarter of a million dollars enough?
In terms of attaining even the lower income levels cited in the study, there are those who scoff at the idea of such “economies of scale.” In 2006, Dr. David Sparling, then the executive director of the University of Guelph’s Institute of Agri-Food Policy Innovation, identified the same $250,000 mark for gross sales, noting it was the level at which farmers should be positioning themselves and their operations, to cope with the conditions of the future.

But times, and prices, have changed, and that $250,000 is achievable on farm acreages that were previously thought to be too small. In Eastern Canada, for instance, a 400-acre farm with rotations of 200 acres of corn, 100 acres of soybeans and 100 acres of winter wheat can, with good yields and prices, achieve that $250,000 stratus, a level that was harder to achieve, even in 2010, much less 2006. That same sized operation in Western Canada would not be capable of producing crops with the same value, hence the propensity for larger farming operations in Manitoba, Saskatchewan and Alberta.

Different year, different conditions
Other parameters have shifted as well, including currency values, the cost of inputs, fuel, the use of genetically modified crops and perceptions of how valuable a farmer’s time is. And that change in mindset is set to alter the mindset of farmers, their families and how they manage their operations.

Also, it is important to keep in mind, with this particular study, that it was conducted more for the suppliers, and less for large commercial producers. The producers provided the insights, but it will be the suppliers that take home the majority of the data. “What we’re seeing here is an opportunity to give suppliers information about their target market. It’s telling them how they can do a better job of providing products and services that are going to create value for this important (large-scale) segment,” says Funk. “If you don’t know this sort of thing about your target market, then you’re sort of shooting in the dark, so now, we have an opportunity to make sure that we’re in a position to create a unique fit for these varying segments that show up in the study.”

Government involvement and training
One facet of the study that could be viewed as something of a surprise was that many producers believe the government should be more involved in agriculture, including the concept of supply management. “Today, there are two issues: there’s government interference and there’s government involvement,” says Funk. “They don’t want a government telling them how to run their farm, or imposing a lot of regulations. But in terms of government supporting commodity prices, developing markets and doing research for the betterment of Canadian agriculture, this is where we hear of farmers wanting more.”
Funk adds that he does not believe the intent on this particular part of the study is to suggest that farmers want the government to make their lives more difficult; they want things made easier.

Another aspect that was a pleasant surprise was the large number of growers who want more training for marketing, agricultural production, succession planning, business risk management and financial planning. In the study in 1994, farm growth was the top priority for farmers. “Now, it’s on the lower rung of that particular group of goals, and what you’re seeing in its place is now running a more efficient and profitable operation,” says Funk. “We’re also seeing a greater desire now to have a more sustainable operation, which they will be able to effectively pass down to future generations.”

Of course, the other evolutionary trend on the farm is the recognition and attachment of a value on the farmer’s time. As operations become larger, more family members become involved in the day-to-day management of the farm, there is a greater willingness to acknowledge that a grower’s time is worth some sort of dollar allotment. A grower may be able to perform accounting tasks or to scout his fields, yet hiring a professional gets the job done faster, with greater efficiency, all while allowing the grower to concentrate on what he or she does best, whether that is planting, calibrating equipment or marketing commodities. “There are opportunities for consultants in the areas where farmers just don’t have the competencies or the time to make them happen,” agrees Funk.

Redefining ‘risk management’
Another change worth noting when comparing the 1994 study to the 2010 edition is the definition of risk management and how that has become altered according to current pricing structures and input values. In 1994, when the price of corn was very near the cost of production, the term referred more to a support program: something that would establish a floor price, and secure the grower against losing money. But in 2011, risk management can address different aspects of farming, including locking in prices on inputs, writing a formal business plan or keeping detailed production records. “They don’t do all of this, and the reason?” poses Funk. “Because it’s too difficult or because they don’t have the time.”

Asked for his “35,000-foot view” of Canadian agriculture, one he believes is as important to suppliers as it is to growers, Funk replies that there are three primary foci, looking to the future. The first is to ensure there is adequate credit with which farmers can adopt new technologies and grow at a reasonable pace. “If people are looking to do a better job of farming, let’s make sure they have the adequate capital to adopt these technologies,” says Funk. And if they’re interested in growing, let’s make sure they have the funds to do that appropriately.”

The second of his three pillars is to create efficiencies, and offer new markets and entrepreneurship opportunities. And third, as mentioned previously, provide the tools to reduce risk, on all sides of the operation. “Make sure that we’re not just farming for today, but that we’re farming for five, 10 or 15 years from now.”