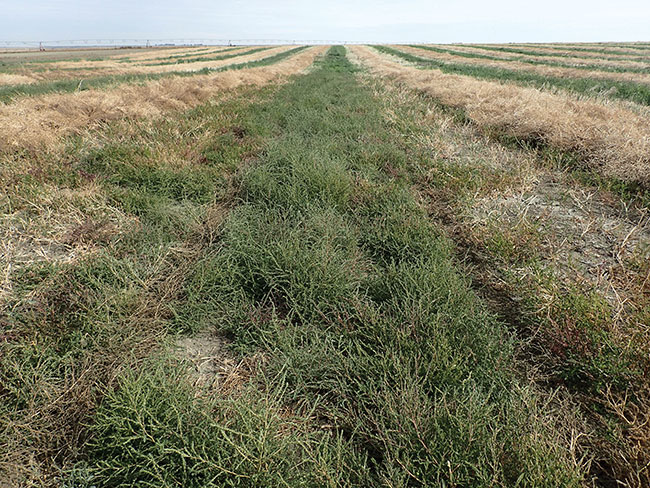 Unfortunately, a Group 4 plus Group 2-resistant kochia population was confirmed in southern Saskatchewan in 2015. It was resistant to both Group 4 herbicides dicamba and fluroxypyr.

“Growers heard the message that they should be tank-mixing another herbicide group with glyphosate in their pre-seed burndowns. This was primarily a Group 4, which is also relied on in cereal crops to control kochia,” says Linda Hall, a professor at the University of Alberta.

This discovery spurred another survey in 2017 to determine the distribution and abundance of multiple-resistant kochia, led by former Agriculture and Agri-Food Canada (AAFC) weed scientist Hugh Beckie, now with the Australian Herbicide Resistance Initiative at the University of Western Australia. Hall, along with colleague Elise Martin of the University of Alberta, and Scott Shirriff and Julia Leeson of AAFC Saskatoon, also participated in the survey.

The 2017 survey was conducted after harvest on 305 randomly selected sites across 16 counties/MDs in southern Alberta. Populations were sampled in fields, roadsides/ditches, railway rights-of-way, and oil well sites.

Glyphosate-resistant kochia was found in small-grain cereals (37 per cent), oilseeds (canola, flax, mustard) (14 per cent), pulses (lentil, field pea) (19 per cent) and large-grain cereals (corn) (11 per cent). The eight cornfields with GR kochia were all located in Newell County.

Group 4 dicamba resistance was found at 24 sites accounting for eight per cent of the 305 populations sampled, compared to none in the 2012 survey. It was found at one oil well site, four ditch areas, and 19 fields (two-thirds cereals, one-quarter pulses, with the remainder oilseeds).

Of great concern, although not surprising to the weed scientists, is that triple-resistant Group 9 + Group 2 + Group 4 was found in 31 (10 per cent) of the sample populations in nine counties. All but one was found in cropland.

This rapid evolution of Group 9 and Group 4 resistance is not surprising considering how quickly Group 2 and Group 9 resistance overtook the kochia population.

A similar trend can also be expected in Saskatchewan where a survey is planned in 2019.

Since growers have heavily relied on Group 4 herbicides to control kochia, the discovery and expected increase of triple-resistant kochia is concerning because it eliminates many herbicide choices. 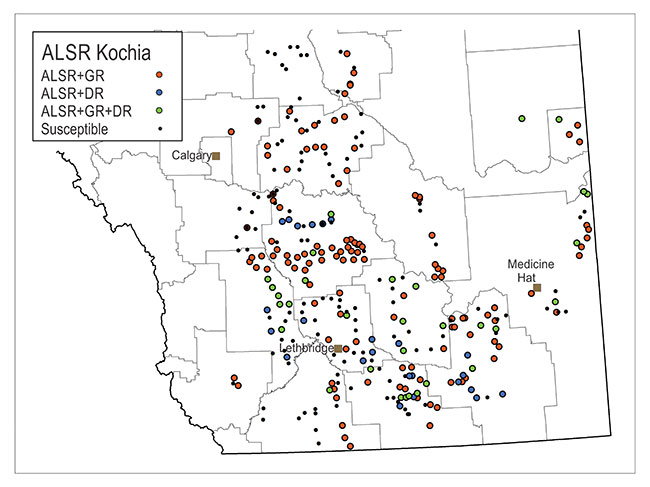 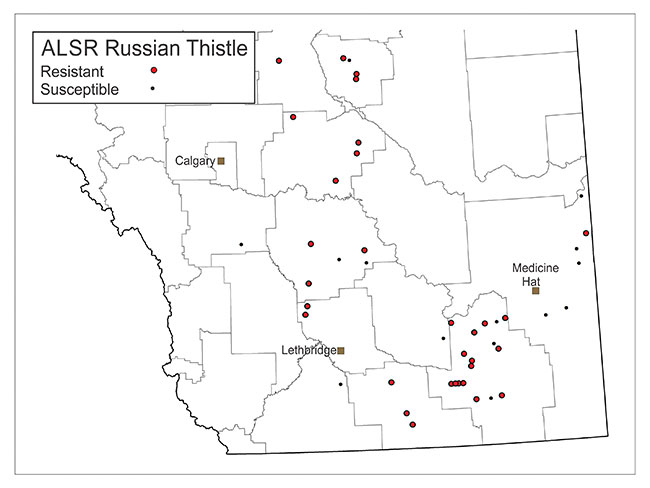 In 2017, Russian thistle screening for herbicide resistance was conducted at the same time as the kochia survey. A total of 45 Russian thistle populations were collected and screened for glyphosate and Group 2 resistance.

“Lack of evidence doesn’t mean that glyphosate-resistant Russian thistle does not occur in southern Alberta. It just might not have been found yet,” Hall says.

The bad news is that Group 2 resistant Russian thistle was confirmed in 31 of the 45 populations – or 62 per cent – in eight of 11 counties surveyed. The resistant populations were primarily found on cropland, but also four in ditches and two at oil well sites.

The lag in Group 2 Russian thistle resistance compared to kochia is narrowing and is expected to quickly evolve. The average frequency of Group 2 resistant Russian thistle in the confirmed populations was 49 per cent.

“Kochia and Russian thistle are so similar. Genetic traits such as herbicide resistance are typically moved by pollen flow, and spreading through space by their tumbling action,” Hall says.

Growers still have good herbicide options to control Group 2 resistant Russian thistle, although the choice is limited in pulse crops. In field pea, only bentazon (Group 6) can be used in-crop; ethalfluralin or trifluralin (Group 3) can be applied preemergence. In lentil, trifluralin can be applied preemergence, while ethalfluralin only provides suppression of Russian thistle.

“There really needs to be a concerted effort by all stakeholders including growers, municipalities and the oil industry to help manage these weeds,” Hall says.