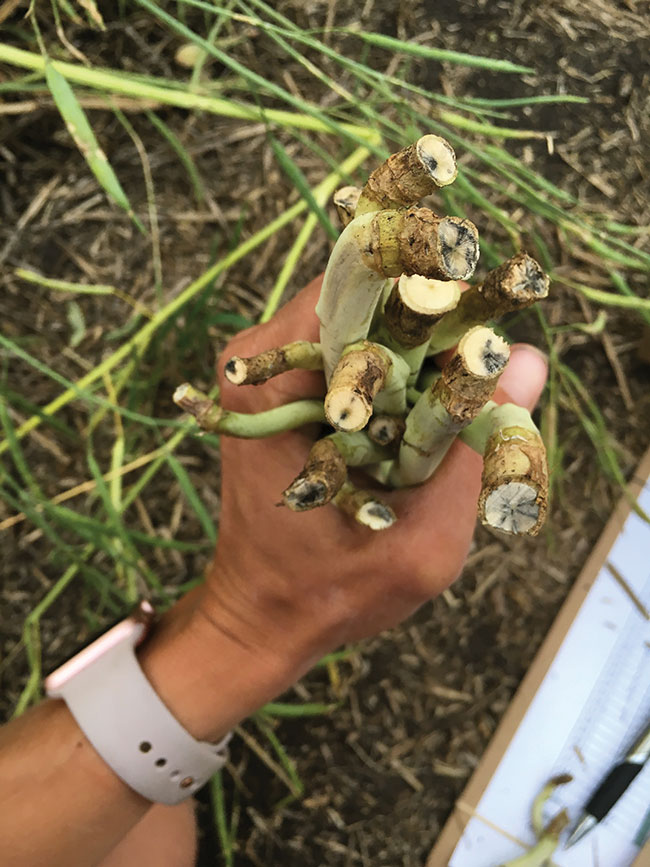 A Lethbridge, Alta.-based canola grower had blackleg troubles on his hands. He was growing a canola hybrid with triple-stacked major gene resistance but still had severe blackleg. Canola stubble samples were sent in to a testing lab, and results showed that the resistant genes did not match up with the pathogen races in the field.

“That field was a great example of how the new blackleg race test and the voluntary use of gene labeling by seed companies can benefit growers,” says Justine Cornelsen, agronomist with the Canola Council of Canada. “The grower is able to look at other hybrids and select a variety with resistant genes that match up with the predominant pathotypes in the field.”

Cornelsen says if growers want to choose varieties that do not have the major gene labeled, she advises them to talk to their local seed rep to find the best solutions. Similarly, some fields may have unique strains where none of the major genes available correspond to the race.

For growers who are practicing good blackleg management practices, such as diverse crop rotations with at least two years between canola, growing R- or MR-rated blackleg varieties and controlling brassica weeds and volunteer canola, blackleg resistance probably isn’t a major concern; a blackleg stubble test would likely not be warranted. But if yield loss is observed and blackleg severity is moving beyond 1.5 to 2, a stubble test could be considered.

“Growers should still be scouting for the disease every year,” says Cornelsen. “The decision to test or rotate resistant sources partly depends on how comfortable a grower is with the level of blackleg in his field and their management practices.”

The blackleg test is based on work spearheaded by Agriculture and Agri-Food Canada at Saskatoon, led by research scientist Hossein Borhan. Cornelsen says genetic biomarkers were shared with public and private pathology labs across Western Canada. Discovery Seed Labs in Saskatoon, and 20/20 Seeds with locations in Nisku, Alta., and Winnipeg, currently conduct the tests. The labs first culture out the samples to confirm the presence of blackleg. If present, the grower can also request the race test to confirm the races of pathotypes present and the percentage of prevalence for each race. The cost is roughly $100 for each test. Additionally, Manitoba’s Pest Surveillance Initiative Lab, supported by Manitoba Canola Growers Association (MCGA), provides the blackleg race test. MCGA members can receive one free blackleg test valued at $200 each year, and growers can visit the MCGA website for more information on how to qualify and submit samples. SGS Biovision, with locations in Sherwood Park, and Grande Prairie, Alta., and Winnipeg also has access to the genetic biomarkers and is working to offer the blackleg race test to growers.

The best sampling time is at swathing when canola stubble can be cut off at ground level and assessed for blackleg symptoms. However, agronomists and growers could still collect samples before spring and submit them for testing because the pathogen overwinters on infected canola residue. Each laboratory has their own sampling protocol and should be contacted prior to submitting stem samples.