Experts have been consistently communicating the message for over 10 years: Use multiple modes of action and rotate herbicides to help reduce selection pressure for herbicide resistance. But where did those recommendations come from? Little research had been conducted in Western Canada, and recommendations were based on weed scientists’ collective knowledge from around the world.

“A mixture of herbicides was thought to be more effective in preventing resistance, but there were no studies worldwide looking at how rotation or mixtures could help reduce selection pressure for herbicide resistance,” says weed scientist Hugh Beckie with Agriculture and Agri-Food Canada (AAFC) at Saskatoon, Sask.

While many farmers do rotate herbicides or use mixtures to help slow herbicide resistance, the recent confirmation of glyphosate-resistant kochia on the Prairies highlights the need to use multiple modes of action to reduce selection pressure – the resistant kochia developed on chemfallow land where repeated applications of glyphosate alone, without tank-mix partners, had been made. In light of this development, reviewing the studies that formed the basis of using multiple modes of action is worthwhile in order to highlight the importance of this strategy.

One long-term, large-plot study was conducted in Western Canada from 1979 to 1998 to look at wild oat resistance to triallate (Avadex BW). In this study, Beckie found that resistance developed after 18 years in a continuous wheat rotation, but not if triallate was only applied 10 times in the wheat phase of a wheat fallow rotation over the same period.

Beckie also set up a four-year study in the 2000s to look at how herbicide rotation and mixture would affect the development of Group 2 (ALS-inhibitor) herbicide-resistant stinkweed populations. The study was conducted at two sites in Saskatchewan, near North Battleford and Watrous.

Hard red spring wheat was seeded in each of the four years, and five per cent of the beginning stinkweed population was resistant to the Group 2 herbicide ethametsulfuron (Muster). Herbicides used for stinkweed control in the trial were ethametsulfuron and/or bromoxynil/MCPA (Buctril M), Group 4 herbicide. Treatments consisted of Muster applied in a tank-mix with Buctril M, or in rotation with Buctril M at an application frequency of zero to four applications over the four-year period. Note, the Muster/Buctril M tank-mix is not a registered use in wheat, but was used for research purposes.

Resistant populations multiply rapidly
In plots where Buctril M or the Buctril M/Muster tank-mix were applied, weed control averaged 96 per cent and 97 per cent over the four years. When Muster was applied alone, weed control declined from 92 per cent in the first year to 31 per cent after four consecutive applications.

The level of Group 2-resistant stinkweed seeds collected post-spraying multiplied exponentially to almost 60 per cent after only one Muster treatment. This rose to 92 per cent after two applications of Muster. The Buctril M treatments averaged three per cent throughout the four years, while in the non-treated check, the percentage of resistant biotypes remained at five per cent.

“The rapid increase in resistance frequency of offspring of surviving plants after only one ALS-inhibitor application helps explain the frequent observations by farmers of good weed control in one year but failure the next, when using the same herbicide or product with the same site of action,” says Beckie.

“The results of this study dramatically illustrate how rapidly ALS-inhibitor resistance can evolve in sensitive weed species with repeated ALS-inhibitor applications,” Beckie stated in his research paper published in Weed Technology. “The most relevant data of this study is arguably that of the seed bank resistance enrichment as impacted by herbicide rotation and mixture.”

Beckie also says that while this research was conducted on a Group 2 herbicide and stinkweed, the concept applies to other herbicides and weeds as well, and whether the herbicides are at high or low risk of developing resistance. For example, despite the fact that glyphosate, a Group 9 herbicide, is rated a low risk, there are many instances of glyphosate-resistant weeds around the world, including giant ragweed, Canada fleabane, giant ragweed and common ragweed in Ontario, and kochia on the Prairies – because of its frequent use. 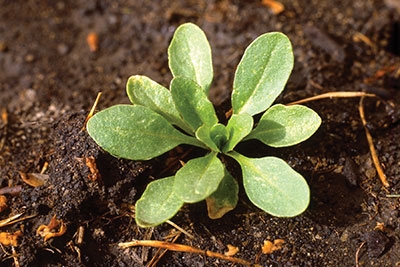 In the absence of herbicide rotation and tank-mix partners Use multiple modes of action and rotate herbicides to help reduce selection pressure for herbicide resistance.