Originally from Asia, woolly cupgrass has been in the United States since about the 1950s and has caused problems in field crops across the corn belt. This annual grassy weed was first found in Canada in 2000, when it was discovered in Quebec. Since then, government agencies and producers have been working to prevent the weed from getting out of hand, and researchers have been learning about the weed and its management under Canadian conditions. 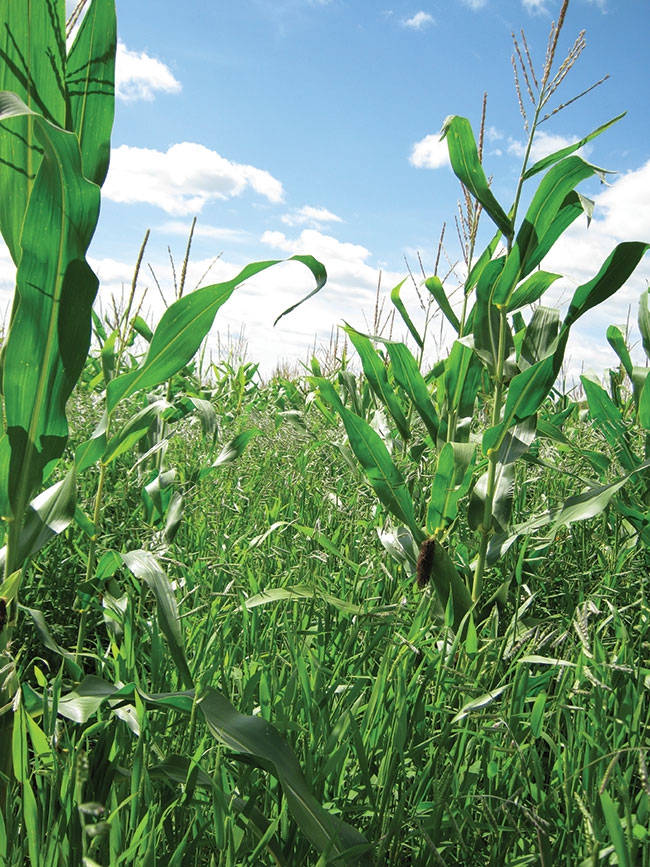 In Canada, woolly cupgrass (Eriochloa villosa) is listed as a pest under the Plant Protection Act and it is listed as a prohibited noxious weed under the Seeds Act. “Woolly cupgrass is an invasive plant that the Canadian Food Inspection Agency [CFIA] regulates mainly because it competes with crops, specifically corn and soybeans. So it can reduce crop yields and also increase the cost of weed control for producers,” explains Kristina Pauk, an invasive alien species and domestic programs officer with the CFIA.

The weed is called “woolly” because many parts of the plant are hairy. The plant grows from 30 to 200 centimetres tall. The leaves are crinkled along one edge and the flowering head (inflorescence) has seeds along one side.

Woolly cupgrass can produce a large number of seeds: an Iowa study found a plant could produce up to 164,000 seeds when grown under good conditions that allowed the plant to produce a lot of tillers.

The seeds are able to germinate and grow in a wide range of conditions. In a Quebec study, the seeds started to emerge in late April to early May. Although most of the seeds emerged in the spring, scattered emergence occurred into July. This prolonged emergence period makes managing woolly cupgrass very difficult in single-pass weed control systems.

So far, the weed seems to be spreading only very gradually in Canada. The most recent national survey for woolly cupgrass was in 2013, and at that time the weed was still limited to a few parts of southern Quebec. Pauk says, “As far as we know right now, it is present in three administrative regions in Quebec: Montégie, Lanaudière and Mauricie.” The CFIA plans to do another cross-Canada survey this year.

Exploring cupgrass control
Robert Nurse, a research scientist with Agriculture and Agri-Food Canada (AAFC), has been working with AAFC colleagues Marie-Josée Simard and Stephen Darbyshire to investigate some aspects of woolly cupgrass and its control.

“We found that woolly cupgrass is pretty variable in its response to herbicides, especially glyphosate. If it is escaping glyphosate control, it will be in the fields later and later, so even when you come in with later glyphosate there could be challenges. So we did a study to look at late glyphosate control and how it affects seed production,” Nurse says.

In this study, they assessed the effect of post-anthesis timing of glyphosate. Nurse explains that woolly cupgrass is very unusual in that it reaches its flowering stage and starts to set seed while the inflorescence is still within the leaf sheath. “So when you look at the plant in the field, you just see the leaves and you don’t see the inflorescence. As a result, you may not realize that it is actually in its reproductive stage. Growers might apply glyphosate at this stage, thinking they can control the weed because it hasn’t reached its reproductive stage yet, but in fact it is already in its reproductive stage.”

Woolly cupgrass tends to reach this growth stage – that is, after flowering and just before emergence of the inflorescence from the leaf sheath – at about the same time as a grower would apply a second in-crop application of glyphosate in soybeans. So the researchers asked themselves how a glyphosate application at this stage would affect the seed production and maturation in woolly cupgrass.

“We found that when you go in with glyphosate at that stage, it is too late to affect the number of seeds that are produced because they have already been fertilized. However, it did affect the viability of those seeds. We saw really marked decreases in viability, sometimes over 95 per cent, and it also decreased the seed weight. The glyphosate application stopped the maturation of the seeds. Some seeds had no embryo present and even the ones that did mature still weren’t viable,” he says.

“We concluded that even those late applications of glyphosate in soybeans when the woolly cupgrass had reached the post-anthesis stage could be an effective measure to control and prevent viable seeds from going into the seed bank.”

The researchers have also done several field studies in Quebec to look at factors that could play a role in the spread of woolly cupgrass.

In one study, they evaluated the effect of a legume forage crop on woolly cupgrass populations. Despite application of a grassy herbicide (sethoxydim) to control the initial flush of the weed and a standard cutting regime for the forage, the seed bank inputs from woolly cupgrass increased each year in the forage plots. Therefore, adding a perennial legume to a crop rotation is unlikely to reduce woolly cupgrass numbers in an infested field. Another interesting finding from this study was that, in the untreated check plots, woolly cupgrass became the dominant weed after only three years, despite higher initial numbers of other weeds, including other grass species and common ragweed.

The researchers also evaluated the effect of predation by invertebrates, such as crickets and beetles, on seed loss for woolly cupgrass and for yellow foxtail (a native weed species). “We found much higher levels of seed predation by these invertebrates on the foxtail. That is probably because the foxtail has already been in their diet, whereas the woolly cupgrass is new to the system so it may not be a part of their diet [yet],” Nurse says. The researchers had thought woolly cupgrass seeds might be attractive to seed predators because the seed has a little globule full of lipids (fats), but it didn’t seem to be a factor in this study.

“We concluded that because other species in the system, like the foxtail, were being predated upon more, this might actually open up the system for woolly cupgrass to have more survival in the fall,” Nurse says.

In another study, they tested water as a seed dispersal mechanism for woolly cupgrass and various other species. “We were thinking: ‘how is a weed like this dispersing from field to field? Is it through machinery, through wind, is it through animals?’’ And one of the ways could be through irrigation ditches, creeks or other waterways running through the property,” Nurse says. “So we looked at how well the seeds floated in water because if they float, then they could be easily dispersed from field to field through water systems or irrigation systems.”

Slowing the spread
Pauk stresses that controlling invasive pests is a shared responsibility between the CFIA, municipal and provincial organizations, and producers “because we all share the risk of consequences of pest introduction and spread.”

Producers can help by reporting the spread of invasive pests into new areas. If you suspect woolly cupgrass plants are on your land, the CFIA encourages you to notify the agency. “In most cases, with any invasive plant, the CFIA inspection staff would work with the affected producer to try to limit the spread while minimizing the impact on the producer where that is feasible. However, the regulatory measures for woolly cupgrass were suspended by the CFIA in September 2012 so we could concentrate resources on survey efforts and re-evaluate the situation in light of emerging information on new control options. So in this case, we would just work with the producer to encourage them to implement best management practices, which maybe they are already implementing,” Pauk says.

These best management practices are biosecurity measures to prevent, minimize and control the spread of invasive plant pests. The CFIA website provides a guide for grain and oilseed producers who would like to implement these farm-level biosecurity measures.

One of the key biosecurity measures for woolly cupgrass is to clean soil and plant material from equipment after working in an infested area. Pauk explains, “Woolly cupgrass seed doesn’t have any specialized dispersal structures, so the seeds generally fall close to the parent plant. There is a chance that the seeds could be dispersed by insects and animals, like birds and rodents, but there is not much research or evidence to support that. However, there are reports of seed movement by machinery and vehicles. We definitely think that machinery, vehicles and tools are the most likely mechanism of spread, so keeping those clean and avoiding spread in that way are definitely most important in our eyes.”

As the CFIA gathers more information on this weed through surveys and research, it may review its decision on woolly cupgrass and consult with stakeholders on whether or not to continue regulating this weed under the Plant Protection Act and on the best regulatory approach if it continues to be regulated.