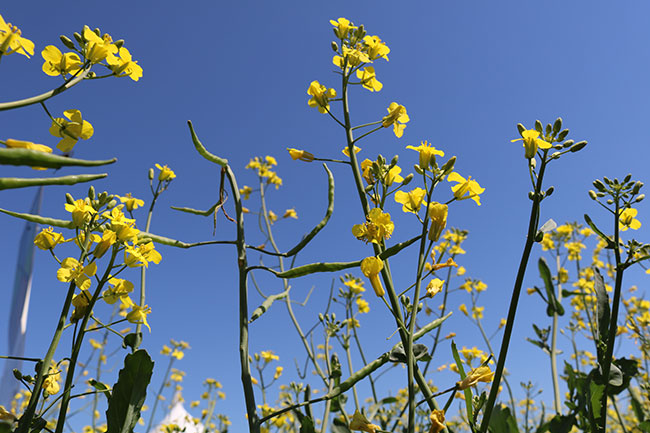 Years of selection in the canola breeding effort have resulted in strong background, or quantitative, resistance in most varieties. Photo by Stephanie Gordon.

Blackleg incidence is on a slow but apparently stable increase on the Prairies, based on Agriculture and Agri-Food Canada’s (AAFC) provincial canola disease surveys, says AAFC research scientist Gary Peng.

“The disease started creeping up around 2010 and we were expecting the trend would be a continuous increase. But in the last four or five years it seems to be in a bit of a stable trend, rather than shooting up,” Peng says.

But new research shows that shortening rotations and over-reliance on the same resistance (R) genes have put heavy selection pressure on blackleg pathogen populations in Western Canada, which means R gene rotation may be essential to keep blackleg to manageable levels.

Blackleg is caused by the fungal pathogen Leptosphaeria maculans. Race-specific resistance genes against L. maculans populations have been available in commercial cultivars since the 1990s.

After blackleg resistance breakdown was noted in the late 90s, a concerted effort by the western Canadian research community resulted in characterization of the R genes in Canadian canola germplasm and cultivars, explains Dilantha Fernando, a professor in the University of Manitoba’s department of plant sciences. At the same time, another project helped characterize the L. maculans pathogen avirulence (Avr) population.

The research showed that most Canadian cultivars contain the single resistance gene Rlm3, Fernando says. By 2017, the Western Canada Canola/Rapeseed Recommending Committee (WCC/RRC) was recommending the use of R-gene labelling so producers could find out which resistance genes were at play in which cultivars – and so they could select the right seed for their fields.

“Now, the growers have more authority and the opportunity to make a more informed decision if they grew Rlm3 last time,” Fernando says. “This allows the pathogen to depressurize.”

Contrary to some expectations, Rlm3 is still useful and should be retained in breeders’ arsenal, Fernando says.

Virulence sometimes comes with a fitness cost for the pathogen, Fernando explains, so the pathogen actually “wants” to revert to its avirulent form – it just needs a break to do so. “Basically, when you remove the Rlm3 gene from the field for a few years, the Avrlm3 isolate population increases. Now you can bring it back once again, this time with the knowledge that you can’t grow it year-on-year,” he says.

It’s a lengthy process to then bring those novel R genes into new cultivars, Fernando says, because blackleg resistance is just one trait of the many that are already built into existing germplasm. “Yield, oil content, protein – when a company has all these goodies in one basket, they need to still bring the new gene into that background,” he says.

Other resistance genes, such as Rlm7, have been used in other countries’ breeding programs, Fernando says; Canadian companies simply have to do the work to breed them into varieties here. He adds that genes Rlm4, Rlm S and LepR3 are already available to Canadian canola growers through seed companies, and Rlm2, Rlm5 and Rlm6 are currently being incorporated into commercial varieties in Canada.

In some senses the fight against blackleg is global, and collaboration can speed breeding efforts. The Canola Council of Canada (CCC) has funded the Canadian chapter of a collaborative project between Australia, Canada, the U.S., France, the U.K. and Germany to identify and characterize single R genes as well as isolates that carry single Avr genes. Once each country completes the work, the information will be pooled to ensure consensus in R gene-naming and to make breeding efforts easier for the entire industry.

Gary Peng says his lab’s blackleg research efforts are focused in two main areas: monitoring pathogen races on the Prairies and investigating the role of quantitative, or background, resistance.

“Quantitative resistance potentially has quite different and complementary mechanisms to specific resistance genes,” he explains.

Initially, Peng says, researchers believed rising blackleg incidence to be a classic case of resistance breakdown, but now they believe the situation is a little more complicated than that. Years of selection in the canola breeding effort have resulted in strong background, or quantitative, resistance in most varieties, he says, which means varieties have some tolerance to the disease in many cases.

Peng’s lab is attempting to use droplet digital PCR to quantify the background resistance of breeding lines before heading to field trials, hopefully making the process considerably more efficient. 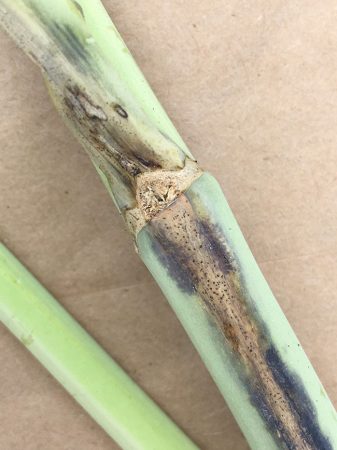 Agronomic considerations
Fernando is currently heading another major project in collaboration with Peng and InnoTech Alberta’s Ralph Lange that will work directly with farmers to look at how R gene rotation can work in farmers’ favour.

Twenty to 25 farmers in each of the Prairie provinces volunteered for the project, which began in 2018 and will run until 2023. The farmers are not being asked to change management practices; instead, researchers, led by Fernando’s master’s student and CCC agronomist Justine Cornelson, will simply note their R gene selections and collect data on pathogen race background and agronomic practices.

In additional study locations, the researchers will decide which R genes are planted and which genes will be “stacked,” determining whether stacking genes prolongs resistance or leads to quicker resistance breakdown due to the presence of pathogen “super races.”

Researchers will also investigate whether agronomic practices have any bearing on blackleg severity, Fernando says. “We’ll have a variety of rotations to study and look at what is happening in real field situations.”

Peng and Fernando are also working with seed companies to develop seed treatments that will protect canola seedlings against early infection. Tied to this work is an ongoing investigation into spray timing windows, as well as a project led by Peng that will look at whether flea beetle damage makes blackleg infection more probable.