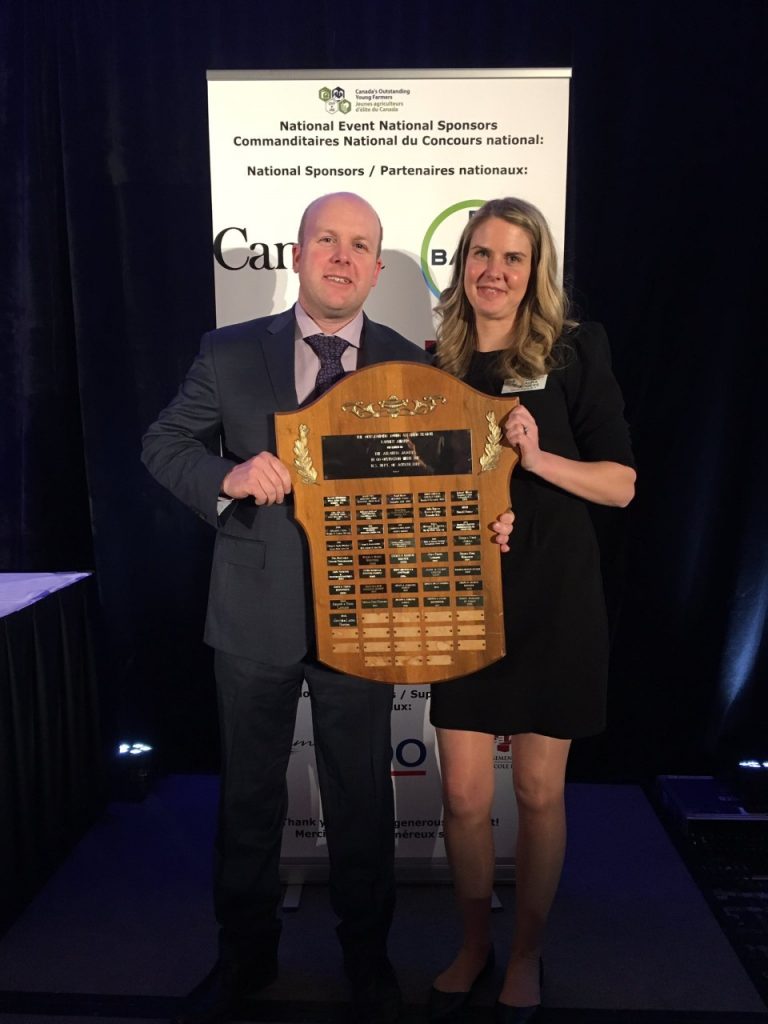 Justin and Laura Rogers of Picturesque Farms were awarded as Atlantic’s Outstanding Young Farmers for 2019.

Justin and Laura Rogers of Picturesque Farms from Coleman, P.E.I. were named Atlantic’s Outstanding Young Farmers for 2019. The announcement was made at the Atlantic regional event held in conjunction with The Atlantic Farm Mechanization Show March 8-10, 2019.

Justin’s farming career began when he purchased a calf at the age of eight, his first tractor at 13, and 50 per cent of the sixth generation family farm from his uncle at 21. This was the start of his seed potato business. While attending college, Justin met Laura and they married in 2004. Together they purchased the remaining 50 per cent of the family farm from his parents.

Now in operating their seventh generation farm, the Rogers’ mission is two-fold. Their mission is to operate a diverse business model, offer quality products and good customer service, and maintain strong financial health. In addition to this, they want to secure future land health while making contributions to their community. In order to achieve their missions they have converted some of their commercial grain production into pedigreed seed. With the pedigreed seed has come grain cleaning, custom seed treating, a focus on genetics and assisting customers with agronomics and crop planning.

“Only passion and determination empowered the Rogers to start their operation from scratch, something that most people say is impossible today in agriculture,” remarked Franck Groeneweg, first vice president of Canada’s Outstanding Young Farmer Program.

Alongside the Rogers, the Atlantic’s Region of Canada’s Outstanding Young Farmers Program were pleased to honour another couple at their 2019 Regional Event. All the finalists recognized were:

Celebrating 39 years, Canada’s Outstanding Young Farmers’ program is an annual competition to recognize farmers that exemplify excellence in their profession and promote the tremendous contribution of agriculture. Open to participants 18 to 39 years of age, making the majority of income from on-farm sources, participants are selected from seven regions across Canada, with two national winners chosen each year. The program is sponsored nationally by CIBC, John Deere, Bayer, La Coop fédérée and Agriculture and Agri-Food Canada and supported nationally by BDO and Farm Management Canada.

Canada’s Outstanding Young Farmers for 2019 will be chosen at the National Event in Fredericton from December 3-8, 2019.