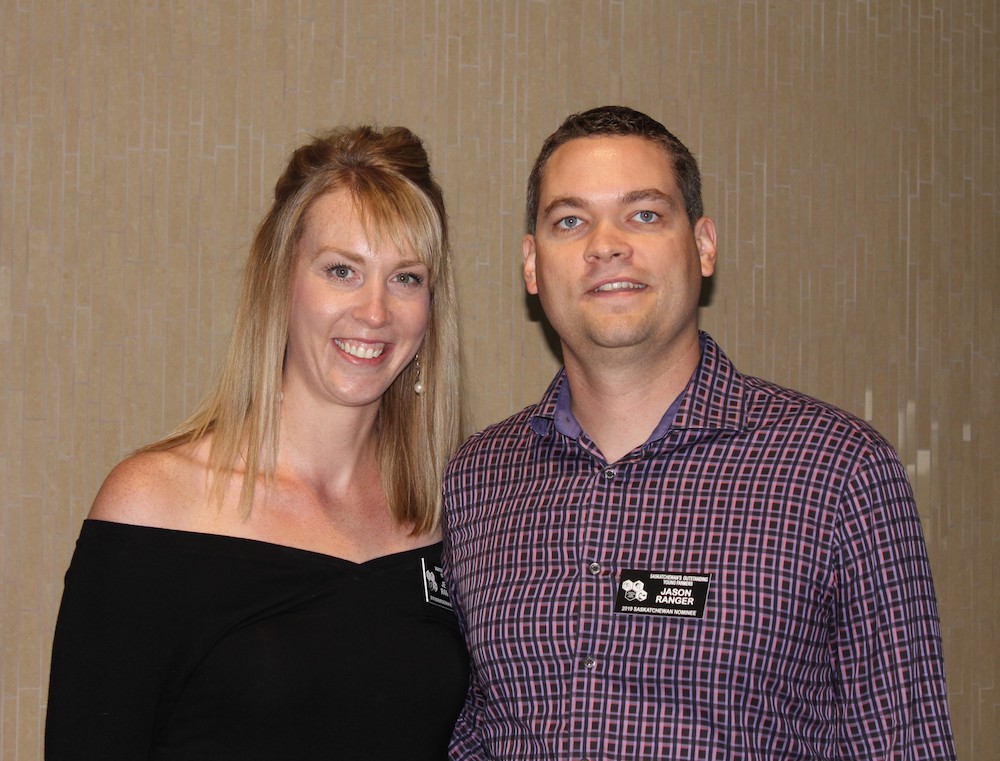 Jason and Jenna Ranger, grain farmers operating in the Shellbrook-Leask area, were named Saskatchewan’s Outstanding Young Farmers for 2019. The winners were announced at the Saskatchewan regional event held in conjunction with Canada’s Farm Progress Show on June 20.

Jason grew up on a farm near Leask, Sask., an hour north of Saskatoon. He graduated from Leask High School and went on to the University of Saskatchewan to start a degree in agriculture. In 2006 after completing one year at the U of S, Jason put his degree on hold when he was given the opportunity to start farming 2,400 acres. Jason loved farming so much that he decided to not pursue his degree at the U of S, but instead he focused on taking shorter courses to increase his agricultural knowledge, and to continue farming full time. Jenna grew up on a mixed farm near Manyberries, Alta. and after high school moved to Saskatoon to take Dentistry at the U of S. She completed her Doctor of dental medicine in the spring of 2011 and started practicing in Prince Albert, Sask. Jason and Jenna met in 2008 and were married in 2012.

Over the years, Jason and Jenna have continued to grow their farm, and currently are farming 10,700 acres, growing primarily canola, oats, wheat, lentils and peas. Although both love their careers, they want their young daughter to witness, experience, and learn to be patient, kind, accepting, and hardworking, qualities Jason and Jenna value in their lives.

The Saskatchewan Region of Canada’s Outstanding Young Farmers Program (COYF) were pleased to have Dave Marit, Saskatchewan Minister of Agriculture, in attendance to honour three outstanding couples at their 2019 Regional Event. The couples recognized were:

“On behalf of the National Board and the entire COYF alumni I’d like to congratulate Jason and Jenna Ranger of Jaran Farms Ltd. on winning the honour,” stated Tara Sawyer, the program’s national board rep. “Their approach to balancing work and family life is a key to their success.”

Celebrating 39 years, Canada’s Outstanding Young Farmers’ program is an annual competition to recognize farmers that exemplify excellence in their profession and promote the tremendous contribution of agriculture. Open to participants 18 to 39 years of age, making the majority of income from on-farm sources, participants are selected from seven regions across Canada, with two national winners chosen each year. The program is sponsored nationally by CIBC, John Deere, Bayer, Sollio a division of La Coop fédérée and Agriculture and Agri-Food Canada and supported nationally by BDO and Farm Management Canada.

Canada’s Outstanding Young Farmers for 2019 will be chosen at the National Event in Fredericton from December 3-8, 2019.