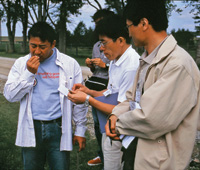 It is one thing for the Canadian soybean industry to identify markets for food
grade soybeans in Japan and other parts of Asia. It is something else to convince
buyers from Japan that Canada is the better choice for food grade soybeans,
and then work to build the relationships necessary to secure those markets.

In North America, e-mails, cell phones and faxes are the tools of most businesses.
They can introduce clients, solidify relationships or close a deal without face-to-face
contact. However, that is not the way the Japanese do business, and a late summer
visit in 2006 from a group of Japanese buyers and processors underscored that
point with great clarity.

Organized by the Canadian International Grains Institute (CIGI) on behalf of
the Canadian Soybean Council, the 10 day tour introduced 10 business people
from Japan to farms, processing plants and research laboratories in Manitoba,
Quebec and Ontario. For many of the visitors, it was their first glimpse of
the scale and complexity of Canadian farms and their affiliates.

"The strength of a tour like this is that these people see first-hand
a whole Canadian soybean industry, right from production through to the handling,
and also see the research and the efforts being made to breed better varieties,"
says Dr. Linda Malcolmson, CIGI's director of special crops, oilseeds and pulses,
based in Winnipeg, Manitoba. She was part of a similar tour with Asian business
people in 2005, but believes there was a significant difference between the
two. The earlier visit tried to create awareness among a group that had little
knowledge of the Canadian soybean sector. The 2006 visit was a means of solidifying
the relationship between people who had a strong awareness of the sector but
little first-hand experience or exposure.

Confidence is key
The importance of this trip cannot be under-estimated, especially with its underlying
theme of establishing confidence among the visitors. "The Japanese culture
is based on having confidence to put your full trust in the abilities of any
partners that they want to do business with, probably more than other cultures,"
explains Marty Huzevka, edible soybeans marketing manager with Hensall District
Co-operative, in Hensall, Ontario. He adds that it can take two to three years
to develop confidence with a potential customer in Japan.

"These kinds of tours are invaluable, primarily because it puts potentially
new customers in front of us, and it allows us to show off our wares and the
facilities and the dedicated staff we have. And they have a chance to meet the
people, which is critical to be able to build some confidence in their belief
that we can supply them with safe food grade soybeans."

Confidence was also a central theme for Tsuyoshi Nakamuta, research and development
section manager with the Umenohana Company in Kurume City, Japan. What he knew
of Canada's soybean sector before the trip was only what he had heard about
it. "By having a chance to look at the soybeans in operations, first-hand,
I'm now more confident and convinced about the safety of Canadian soybeans,
so when I talk to my customers, I can explain to them better," says Tsuyoshi.

Also, information about Canada's IP soybean sector and its requirements are
not readily available to Japanese buyers. "Now I have that information
and that has really increased my confidence in the safety of Canadian soybeans
and again, I will convey this message to my Japanese customers and to end users,"
says Tsuyoshi.

Quantity and quality of relationships
For Michelle McMullen, this particular trip, like the 2005 visit from Asian
buyers and processors, provided a double sided opportunity. On the one hand,
there is always the need to expand the number of business ties, to broaden the
potential for working with more individuals and companies. But there is also
the opportunity to strengthen the quality of the relationships between those
in the Canadian soybean sector and potential Japanese buyers and processors.

"I think it's a little bit of both, where we need to focus on our relationships
that we currently have and maintain our current market share," says McMullen,
industry opportunities co-ordinator for the Ontario Soybean Growers in Guelph
and the Canadian Soybean Council. "But it is also important to look at
new opportunities for Canadian soybeans and build upon the reputation that we've
established." -30-


Related
Building on a reputation
Next destination for Canadian soybeans: Vietnam
How big a threat is Argentina?
Success in satisfying buyers