Advances in wheat technology have not kept pace with corn and soybeans due to the cereal’s complicated
genetic profile. However, that could change within a decade as plant breeders are closer than ever to perfecting hybrid wheat. Researchers in Europe are starting to solve the puzzle and success seems likely after many years of research, investment, and effort. 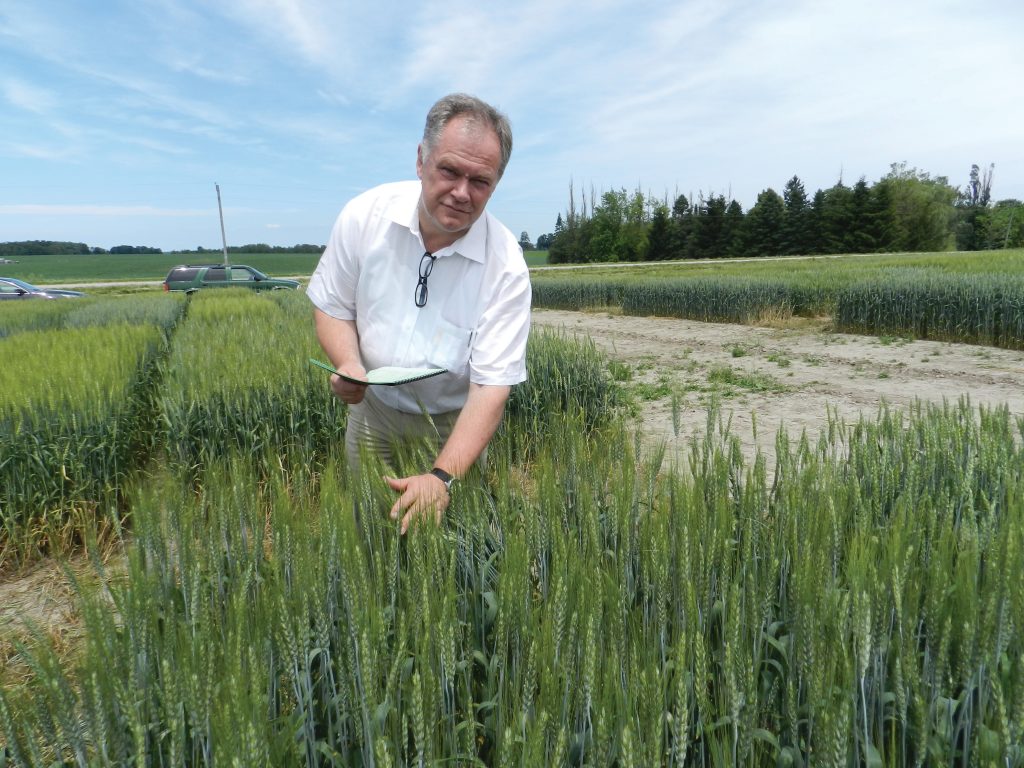 Dr. Stefan Bruns of KWS Cereals Division examines wheat near Palmerston Advances in wheat technology have not kept pace with corn and soybeans due to the cereal’s complicated genetic profile.

“It’s not easy to develop hybrid wheat,” admits Dr. Stefan Bruns, commercial director for KWS Cereals Division of Germany. The company currently has hybrid rye varieties that are being grown in test plots in Portage La Prairie, Man., and Saskatoon, Sask., to determine if they are hardy enough for the Canadian growing climate. But, wheat is proving, as always, to be more challenging.

“Because wheat is self-pollinating, it needs a system to ensure cross-pollination between pure lines to create hybrids, and we need an efficient seed production system,” he says.

Growers understand many of the challenges facing wheat breeders, but they are hopeful success will happen soon for both financial and altruistic reasons. Hybrid wheat, like most hybrid food crops, would have better yield, which means an increase in the food supply for a growing world population. In addition, with hybrid varieties, more wheat could be grown on the same amount of arable land, a commodity that is shrinking. Growers could also expect better financial returns through increased yields even with higher expected seed costs over conventional varieties.

“High yielding varieties will be the first wave of any advancement in hybrid technology,” says Todd Hyra, SeCan business manager in Winnipeg. “But, right now hybrids are not producing on a predictable scale.”

Despite the advances that KWS has made in recent years, Bruns says varieties will not be available soon because, once available, an efficient seed production system needs to be in place. As well, varieties developed in Europe have to be adaptable to North America, hence the western Canadian test sites. “We will not be able to offer a hybrid for at least the next 10 years because we need the right varieties with clear advantages against conventional varieties in order to be successful.

Other companies have indicated they are also working on developing hybrid wheat and it appears they are within a five-to 10-year window for development, according to Ellen Sparry, genetics manager for C & M Seeds in Palmerston, Ont. “I think it will likely take up to a decade before we see any hybrid varieties commercially available in Canada,” she says. The advantages hybrid wheat offers growers are improved yield, improved vigour and more stability in stressful growing conditions, she explains.

“You can’t just develop a hybrid variety: you have to develop a good hybrid to ensure commercial success,” Sparry says.

“Everyone – from the grower, the seed and grain partners to the miller and baker – has to get what they want. Once the hybrid system is perfected, there could be some potential to tailor varieties to meet specific end-use requirements. For now, development will focus on the needs of the entire industry.”

“A lot depends on the attributes of the product,” explains Hyra. “There may not be an identity preserved aspect to it. Right now, the primary goal for hybrids is to get more production per unit area.”

Bruns agrees that one big challenge is creating highly competitive “hybrids” with a good working seed production system, especially with all the known challenges like flower synchronization between male and female, and males with high pollen production. Many breeders have been working to develop hybrid wheat since the 1960s and Bruns believes the investment in developing wheat hybrids will increase in the next few years.

“I am confident it will happen,” says Hyra of the imminent development of hybrid wheat. “But, it has to make sense in the eyes of growers. If you get a 10 or 15 per cent yield kick, that would be great, but if it isn’t consistent, it may not be worth the added cost. The production environment is also a consideration – a 10 or 20 per cent yield boost on a 100 bu/ac crop is significant, but the impact is reduced if the area can only produce a 30 bu/ac crop.”

Sparry sees pluses for the wheat industry in Canada, from seed growers to wheat producers to end users, when hybrid wheat is finally perfected. However, the entire industry must continue to wait, despite the promise of current breeding programs, for the inevitable breakthrough to happen.