Features Agronomy Tillage
Is A. distinctus causing your crop damage?

No need for alarm, but there is something funny going on with Aphodius distinctus, and Kevin Floate, research scientist and entomologist with Agriculture and Agri-Food Canada (AAFC) at Lethbridge, Alta. is hoping to find out what. One of several species of dung beetles, A. distinctus has been potentially linked with crop damage in a steady stream of reports.

“I’ve been studying insects for 20 years, and every year in June I get a flurry of phone calls about beetle grubs in fields. In most cases, the calls are associated with isolated areas of crop damage across a wide range of crops including pea, corn, wheat and barley,” says Floate.

Aphodius distinctus is a European species of beetle that is common throughout Canada. The adult beetle is gold and black, about five to six mm in length. It has a preference for open pastures and is generally attracted to cattle and horse dung from mid-August through mid-October. The adults overwinter, emerging in spring and laying eggs in the soil in April and May. The eggs develop into the larval stage and look like white grubs. The larvae are approximately three to four mm long and have a very distinctive C-shape.

The grubs are reported to feed on rotting organic matter, but Floate wonders if they may also be feeding below ground on plant roots as he keeps getting reports of crop damage associated with beetle grubs.

“When farmers report crop damage associated with these grubs, populations are at least 90 to 100 larvae per square metre, mostly in patches in the field, but I’ve seen densities of 200 to 300 per square metre,” says Floate.

The larvae feed through June and into July, then pupate, with adults emerging in September to complete the life cycle. The adult beetle is easily attracted to dung, and Floate has been able to collect 3,000 to 4,000 A. distinctus adult beetles in one dung-baited pitfall trap over a one-week period.

Floate speculates that the adult dung beetles may also be attracted to field crops in spring or fall when manure or compost is spread on the land.

“It could be the adults are attracted to composted land. You can often see clouds of beetles hovering behind a manure wagon,” says Floate.

Join the pest patrol
Since so little is known about A. distinctus and its impact on crop production, Floate is asking farmers and agronomists to send him reports of beetle grub damage in crops.

“I want to build upon the anecdotal stories we are hearing and start to build a better understanding of the insect. Maybe some crops are more susceptible. What are the grub densities that are causing crop damage? These are some of the questions we are hoping to start to answer,” says Floate.

He would like to know the field history, location, crop rotations, fertilizer or compost application, crop residue in the spring, whether the field is irrigated, the density and distribution of the white grubs, and the extent of the crop damage.

“Maybe the crop damage we are seeing is on fields with high organic matter, or maybe the field was composted or manured in the fall,” says Floate. “Having more people looking for the grub and providing information will help to explain why we seem to be getting these reports of grub damage.”

Ideally, he would also like to obtain live samples of the grubs so that he can rear them to adulthood to confirm the species. The different species are virtually impossible to distinguish in the larval stage but A. distinctus is easily recognized at the adult stage because of its unique gold and black colouring. The white grubs can be collected by sifting through the top few inches of soil. Floate rears the grubs in small jars of soil, which takes about three to four weeks at room temperature.

Floate says farmers and agronomists can email him at kevin.floate@agr.gc.ca to obtain specifics on the type of information he is looking for and how to collect and send in live white grub samples. 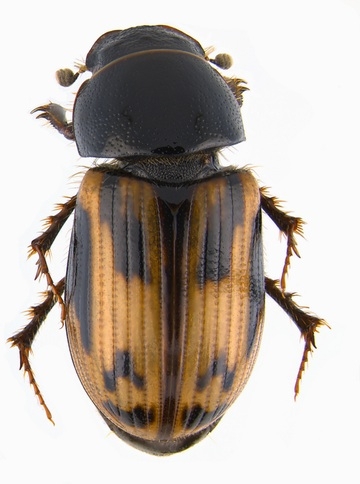 A. distinctus has caused isolated areas of crop damage during the spring. No need for alarm