There is an inherent problem with silage production. The further away a field is from the ensiling facility, the greater the cost. That’s the reason many silage producers often resort to tight or continuous rotations on fields close to home. However, that can mean increased disease and weed pressures, and ultimately lower yields.

“Your first line of defence against disease are your heavy hitters, and include a rotation with at least two years between host crops and the use of resistant varieties,” research scientist Kelly Turkington at Agriculture and Agri-Food Canada’s (AAFC) Lacombe, Alta. research station says. “Your second line of defence includes using good agronomics, balanced fertility and scouting, and your last line is fungicides.”

For silage growers, though, the first line of defence is weakened with tight or continuous barley rotations. Research at AAFC led by scientists at Lacombe over the last 20 years is finding that rotational diversity, barley variety mixtures and intercropping can bolster secondary defences and have an impact on diseases and weeds, crop competitive ability and sustainable silage production.

Going back as far as 1998, Turkington found that growing the same barley variety continuously on the same piece of land quickly rendered a resistant variety susceptible to disease. In a three-year experiment established in 1998 by Turkington, disease severity was highest and yield was lowest when a barley variety was grown on its own residue. This was especially the case for varieties susceptible to scald and net blotch. The trial also looked at rotating barley varieties in a continuous barley rotation. Results showed that by rotating resistant varieties, barley cultivar rotation could be used as a short-term strategy to help reduce leaf disease levels and maintain crop productivity.

Building on this early trial, Turkington expanded the research to look at rotational diversity and seeding rate to assess the impact on weeds and disease. The six-year trial, running from 2002 through 2007, looked at six rotation/diversity treatments, two seeding rates and two silage harvest dates, as follows:

Seeding rates for the three crops were 250 seeds per m2 and 375 seeds per m2. Time of silage removal was an early cut and a late cut.

Turkington notes although disease levels (mainly spot-form net blotch) tended to be similar among treatments, silage yields on a dry weight basis were highest for those rotations that included oat and were lowest for the continuous Seebe barley rotation. He says overall silage yield tended to be higher for the late silage harvest date compared to the early harvest date, but this difference may also reflect higher wild oat biomass for the late harvest date.

Seeding rates were also found to be important. Turkington says other work by research scientists Neil Harker and John O’Donovan at AAFC Lacombe show that keeping barley seeding rates up helps with crop competitiveness. Recommended target rates are 300 seeds per square metre or about 2.25 to 2.5 bushels per acre seeding rate.

Early silage harvest reduces wild oat
Another AAFC study, this one led by research scientist Neil Harker at Lacombe, found that early silage harvest could be a good strategy to reduce wild oat populations. The trial was conducted over five years from 1996 to 2000 under zero tillage at Lacombe and Melfort, Sask. Three harvest timings were compared, including barley harvested one week after heading (early), approximately 14 to 16 days later at the soft dough stage (normal) and at maturity (grain).

Turkington says silage harvest timing walks a fine line between going too early and losing wet/dry weight silage yield and nutritional quality, and going too late and having wild oats shell out onto the field.

Additional research
Turkington, along with O’Donovan and Harker, established another research trial at AAFC Lacombe, with colleagues Tim McAllister, Bob Blackshaw and Newton Lupwayi at AAFC Lethbridge, to further investigate integrated management practices for higher silage productivity. They wanted to look at the impact of variety rotation, variety mixtures and intercropping on diseases and weeds, competitive ability and sustainable crop production over several years. The trial had a three-year rotation sequence from 2008 through 2010, and 2011 through 2013, with treatment comparisons made in 2010 and 2013. All treatments had the six-row barley variety Sundre either alone or as part of a barley variety mixture or intercrop:

Turkington says there appeared to be limited impact on weed competitiveness when using barley variety mixtures or intercrops of barley, oat and triticale, and this component of the study was discontinued after 2010.

“If you are going to rotate barley varieties, I suggest that you look for varieties from different breeding programs because that increases your chances that the varieties will have different sources of resistance,” Turkington says.

Silage yields were affected by the treatments at both Lacombe and Lethbridge in 2010 and 2013. At Lacombe in 2010 and 2013, silage yields on a wet or dry weight basis were lowest for the continuous Sundre, highest for the intercropping treatments with the same or different varieties, and intermediate for the barley mixtures. At Lethbridge in 2010 and 2013, the continuous Sundre treatment tended to have the lowest silage yield, although the intercrop treatments with winter triticale also had lower yields, especially on dry weight basis. Barley variety mixtures and intercropping with spring triticale tended to have higher, but similar yields.

Turkington says the Lethbridge results were puzzling. The barley-only treatments where the varieties changed or where there was a mixture of varieties had some of the highest yields. The continuous Sundre barley and the intercropping treatments especially with winter triticale tended to have the lowest yields – the intercrop treatments logically were expected to have had higher yield because of lower disease levels.

“We’re still trying to figure Lethbridge out. One of the impacts of the trial is that if you target harvest at the soft dough stage of barley in the intercrop, the oats may be mature and the triticale immature, so the yield drops,” Turkington says. “Lethbridge also lost a year of data to flooding, so that may have had an impact as well.”

Overall results indicate the addition of diversity in terms of different crop types and perhaps barley genetics can help to reduce the level of leaf disease and improve silage productivity. Tim McAllister at AAFC Lethbridge is studying the impact of the treatments on silage quality and found that the increased lactic acid production and reduced pH suggest that ensiling an intercrop of barley, oat and triticale enhanced fermentation during ensilage and could be a potential method to improve silage quality. Turkington and colleagues suggest this study demonstrates that high-quality silage can be generated for intercrop cereal silage and this approach could be a valuable asset in terms of avoiding mono-culture production systems and the build up of plant diseases that are associated with this practice.

Putting the pieces together
In 2013, Turkington started several more trials.  One is looking at the impact of seed treatment, plant growth regulators and fungicide timing on disease levels, grain yield and kernel characteristics of AC Metcalfe at multiple locations across Canada. Another trial is looking at seed treatment, fungicide application and barley variety disease resistance to assess disease levels and yield impact. These results are a few years out but should provide further guidance for silage as well as feed grain and malt producers.

Based on all the trials to date, the results show that one production practice should be avoided if at all possible: growing the same barley variety continuously will eventually end up in a disease and yield wreck. For silage growers, Turkington recommends building the first line of defence starting with resistant varieties. He says to pick the best combination of disease resistance and yield.

Building on that first line of defence, rotating varieties with different sources of disease resistance can help. But to really beef up the front line, Turkington says using a combination of triticale, oat and barley in an intercrop can help reduce disease pressure and provide good silage yield. Fungicides can also help, but silage production is generally based on low-cost inputs.

“In developing our trials, we’re looking at strategies that help to minimize input costs,” Turkington says. 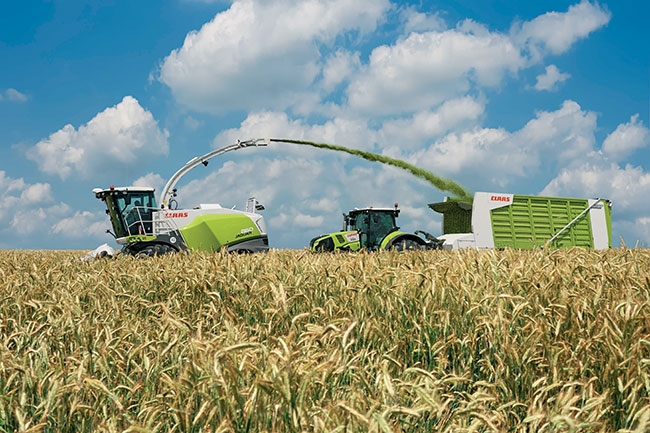 Use a combination of triticale There is an inherent problem with silage production. The further away a field is from the ensiling facility