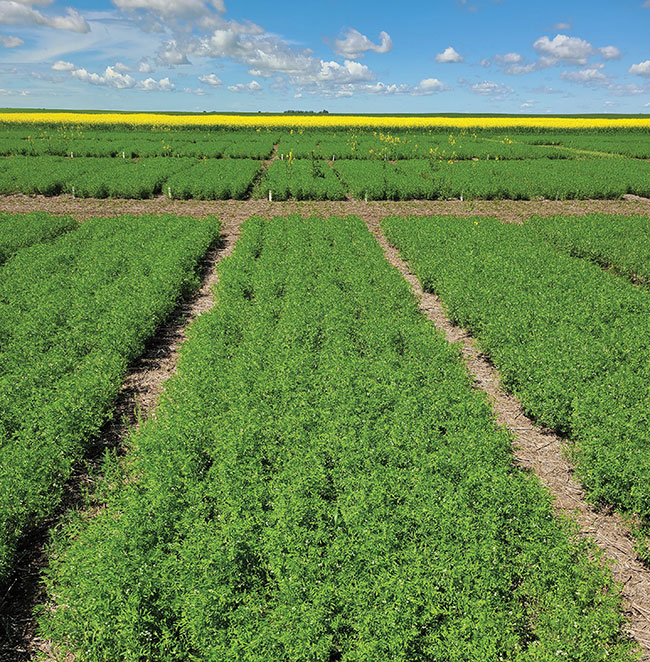 Herbicide layering with a soil residual product was an effective strategy for kochia control. Photo by Jessica Enns.

Kochia keeps tumbling across the Prairies, and it is a particularly troublesome weed in lentil, which is a poor competitor against weeds in the first place. Added into the mix is that all kochia on the Prairies is considered resistant to Group 2 herbicides – the main group used for broadleaf weed control in Clearfield lentil.

“Lentils are really poor competitors and there can be up to 40 per cent yield loss with heavy weed competition,” says Jessica Enns, general manager at the Western Applied Research Corporation (WARC) in Scott, Sask. “There really aren’t a lot of options. Farmers rely on Group 2 herbicides, but there is Group 2 resistance in kochia, wild mustard and stinkweed.”

Enns has been involved in several studies looking at alternative control of kochia in lentil. Three studies, funded by the Government of Saskatchewan through the Strategic Field Research Program and the Government of Canada under the Canadian Agriculture Partnership, were initiated in 2019 at WARC and with Bryan Nybo at the Wheatland Conservation Area (WCA) in Swift Current, Sask. These studies include herbicide layering, crop rotations, and seed bank reduction with weed clipping/wiping.

At the Scott site, the crop rotation study did not go ahead due to lack of field access due to restrictions in place from the COVID-19 pandemic. The clipping and weed wiping also did not go ahead as planned. In 2019 and 2020, kochia had poor establishment in both years and did not grow taller than the lentils. As a result, no data was collected in those two years.

Herbicide layering best option
At both Scott and Swift Current sites, kochia was successfully controlled with herbicide layering, which consists of applying herbicides at two different timings using different herbicide groups. Fall-applied, residual herbicides compared were Edge (Group 3) either surface-applied or harrowed, Focus (Group 14 + 15), Valtera EZ (Group 14) and Fierce (Group 14 + 15). These were followed up with a glyphosate (Group 9) pre-seed application in the spring. These treatments were also compared to glyphosate pre-seed only, or glyphosate + Heat LQ (Group 14) pre-seed.

Kochia plant populations were recorded before seeding with a second kochia plant count and kochia biomass taken later in the season followed by lentil yield at harvest. Preliminary data for 2020 is available, but the 2021 trials have not been analyzed.

At Scott in 2020, herbicide layering with Edge, Focus, Valtera EZ, and Fierce all reduced kochia populations compared to glyphosate alone or glyphosate + Heat, although kochia populations were quite low throughout the year at this site. The highest yielding lentils were grown with fall-applied Focus (3,910 kg/ha; 58 bu/ac) or Fierce (3,849 kg/ha; 57 bu/ac) with spring-applied glyphosate.

The results from 2020 in Swift Current showed a similar trend, with Valtera EZ, Fierce and Focus reducing kochia populations the most.

“Herbicide layering is definitely working well,” says John Ippolito, crops extension specialist with SMA in Kindersley, Sask., who is overseeing the research for the ministry. “From the plots I saw in 2021, I think the results will pretty much mirror what we’ve seen in the first year.”

In an earlier lentil input study over three years and five locations by the University of Saskatchewan, herbicide layering was also successful. Focus followed by pre-seed glyphosate was effective at 73 per cent of the sites with a 66 per cent increase in annual weed control and a 76 per cent reduction in weed biomass, including kochia. Focus followed by glyphosate increased profitability when weed densities were greater than five plants per square foot (50 pts/m2).

“With Focus plus glyphosate, we usually made our money back with an increase in yield,” Enns says.

In 2020, Enns also conducted a herbicide layering trial with similar herbicides, which was funded by Saskatchewan Pulse Growers and the Government of Saskatchewan and Government of Canada under the Canadian Agriculture Partnership. In that research, a similar trend was observed with fall-applied residual herbicides showing the best weed control in lentil. 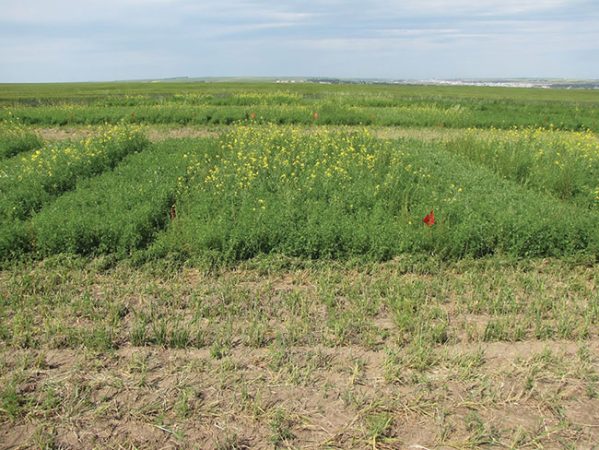 Weed wiping and clipping shows promise
The Swift Current location has two years of data on weed wiping and clipping. Clipping treatments started when kochia plants were approximately eight inches (20 cm) taller than lentils with treatments following 15 and 30 days later. Wiping treatments with glyphosate started when kochia was at 80 per cent bolting, 21 days after bolting or a combination of the two. These were compared to an untreated control.

A 37 per cent reduction of kochia population was attained with wiping at bolting (20-cm tall) and 21 days following. Wiping at 21 days after bolting reduced populations by 33 per cent, and clipping when kochia was 20 cm above the lentil stand resulted in a reduction of 21 per cent.

“I didn’t expect there to be any difference in yield. By the time kochia was eight inches taller than lentil, early weed competition would have already caused a lot of damage,” Ippolito says. “Still, there may be some benefit with wiping or clipping in reducing the kochia seed bank.”

One fly in the ointment, though, is that the researchers do not know whether the kochia populations are glyphosate resistant. This would make the wiping treatments less or un-effective, depending on the level of resistance. In Alberta (2017) and Manitoba (2018), more than 50 per cent of kochia populations sampled by research scientist Charles Geddes at Agriculture and Agri-Food Canada in Lethbridge, Alta., were found to be resistant to kochia. Results from the 2021 Saskatchewan survey are not yet available.

“That’s been one of the challenges with weed wiping. Glyphosate is the only product registered, so if we do have glyphosate resistance, that may be why we’re seeing mixed results,” says Ippolito.

Winter cereals in rotation trial in-progress
The third trial in Swift Current is looking at including winter cereals in rotation in order to increase crop competition in non-pulse years. A canola-winter cereal (winter wheat or fall rye)-pulse (pea or lentil) are being compared to one with spring wheat instead of the winter cereal. The rotations were established in 2019. Lentil and pea were first grown in 2021, and that data is still being analyzed for any trends in kochia control and crop yield.

“Overall, I think that the research so far shows that herbicide layering works and is a good strategy for kochia control,” says Ippolito. “Wiping and clipping has potential to reduce weed seed return but they won’t have much impact on preventing yield loss.”