By now, most producers have heard the news about soybean rust and its arrival on North American soil. 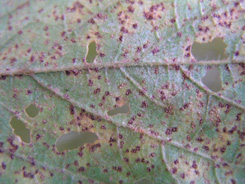 By now, most producers have heard the news about soybean rust and its arrival
on North American soil.

The chronology of its movement into nine American states has been documented
thoroughly, as has speculation as to whether it will be a problem to growers
in Ontario this season.

Rather than push the panic button on the issue, Top Crop Manager, the
Ontario Ministry of Agriculture and Food, the Ontario Soybean Growers and the
Ontario Soybean Rust Coalition have published this special edition to raise
the level of awareness on this disease. With the potential to severely impact
yield, scouting fields will take on an even greater significance in identifying
the disease.

Yet, the important message from many of the specialists consulted for this
issue is to be well informed and prepared for the eventuality of soybean rust
coming into Ontario. As many of them observe, "It is no longer a question
of 'if', but 'when' soybean rust appears in this country."

In the following stories, Top Crop Manager examines various aspects
of soybean rust, from the physiology and effect on the soybean plant, to the
weather systems that will bring it north from its current location, to the fungicides
and some helpful tips on fungicide application. The disease's ultimate impact
on marketing is examined, as well.

The picture of soybean production in Ontario is undergoing rapid change. In
recent years, weed resistance and soybean aphids have challenged growers to
adapt and overcome, and they will continue to do so. Now, soybean rust is one
more of those influences that will further advance the evolutionary process
in soybean production, from an easy-to-grow, low maintenance crop, to one requiring
greater awareness, vigilance and risk management practices.

Be watchful, be diligent, be ready.