Root rots are a major, yield-limiting problem for Prairie soybean growers, so western Canadian researchers are working on a range of studies, such as evaluating crop rotations and screening soybean lines for genetic resistance, to help improve root rot management. Now, a project led by Fouad Daayf, a plant pathologist at the University of Manitoba, is extending that range of research into some fascinating new areas. 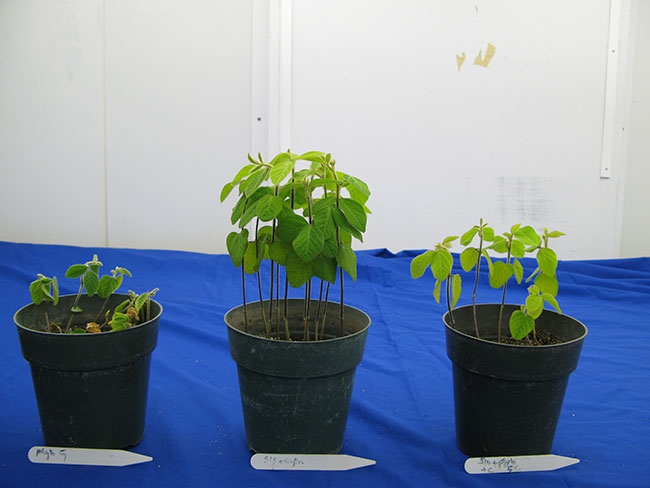 “Root rots are very important diseases of soybeans. They are difficult to manage due to a number of factors. One factor is that they can be caused by individual pathogens or by combinations of two of more of those, such as Phytophthora sojae, Fusarium species, Rhizoctonia solani and sometimes Pythium,” Daayf says.

“A second factor is that root rots are caused by seedborne and soilborne pathogens. This means that they cannot be treated by foliar fungicides, and that you don’t see the problem until at least some of the damage is done.”

Daayf explains that the options currently available to Manitoba soybean growers for controlling root rots don’t always provide effective control. Resistant varieties are usually a key tool for managing root rots, but with soybean being such a new crop to the Prairies, there is not yet enough strong genetic resistance available in commercial Prairie varieties. Crop rotations can help, but various crop types are hosts to root rot pathogens and if the pathogens remain viable in the soil, then the rotation may not provide good control. He adds, “Seed treatments are available and can work well for certain pathogens in the early stages of seedling development, but they are not as effective against some of the infections that occur, say, at later stages of the crop.”

Daayf notes that one control option might be chemical fumigation to kill all the pathogens in the soil, but that would also kill all the other soil microbes – including the beneficial ones.

Novel agents
His project, which runs from 2014 to 2017, is assessing the use of plant-growth-promoting rhizobacteria alone and in combination with phosphite, chitosan and an extract of Canada milk vetch (CMV). Daayf has worked with all of these disease control agents in previous research on other diseases and other crops, and all these agents have environmentally friendly aspects.

Plant-growth-promoting rhizobacteria are bacteria that colonize plant roots and form beneficial relationships with the plant. According to Daayf, rhizobacteria can fight plant pathogens in various ways, with some rhizobacteria species having more than one mode of action against pathogens.

Chitosan is a biodegradable biocontrol product derived from chitin, the substance that forms the tough shells of shellfish like crabs and shrimps. Chitosan has antimicrobial effects, including activity against fungi, bacteria and viruses, and it can help boost a plant’s own defences against pathogens.

Phosphite fungicides are used especially for managing diseases caused by oomycetes like Phytophthora, and have a lower environmental risk than some other such fungicides. Phosphites can stimulate a plant’s ability to fight pathogens and can also directly inhibit pathogen growth and reproduction.

Daayf was a pioneer in the use of CMV. “Years ago I was trying to find plant extracts that would work on late blight [Phytophthora infestans] and Verticillium wilt in potatoes. So I was trying plants that are native to the Prairies. Canada milk vetch was one that was screened and selected as a successful biocontrol agent against verticillium wilt,” he says. Daayf and his team have shown that CMV extracts induce plant defences against pathogens.

A step-wise approach
The project team includes Daayf’s research associate, Arbia Arfaoui, who is conducting the work, and technician Lorne Adam. They are sharing ideas and research information with plant pathologists Debra McLaren, who is with Agriculture and Agri-Food Canada (AAFC) at Brandon, and Maria Antonia Henriquez, who is at AAFC Morden. Plus, the AAFC researchers are providing fungal strains for Daayf’s project. The isolates of the pathogens that the team is working with were collected in Manitoba by McLaren and Henriquez.

The project team is using a step-wise approach for evaluating the different treatment options. The first step is to test each of the disease control agents, applied at a range of concentrations, on the individual pathogens in vitro (in petri dishes) to see if the agent acts directly on the pathogen. Then, they try the rhizobacteria in combination with each of the other agents. Next they try the treatments on plant tissues, like pieces of roots or stems. After that, they test the treatments on seeds and seedlings in a growth chamber, a growth room and a greenhouse. Ultimately, they’ll test the treatments in the field. Based on what they find out at each step, they’ll decide which treatments should move to the next step of testing.

Daayf emphasizes that it’s a long journey to identify effective control options. “When you find a treatment like a rhizobacterium that works against the pathogen on plant tissues in vitro, you have to go to those other levels to see if it actually works in the whole plant. Even if it works in a greenhouse, it may not work in the field if the environmental conditions make the treatment not as successful.” For instance, in field situations, there could be different soil microbial communities, unusual weather conditions that affect microbial activity, different soybean genotypes that interact differently with the rhizobacteria, and so on.

The researchers have obtained about 100 isolates of native rhizobacteria strains from Manitoba plant and soil samples. Some samples were collected by Daayf previously. Others have been collected specifically for this project; the researchers looked for healthy soybean plants growing in soils infested with root rot pathogens because the plants’ successful growth could be due to the disease-fighting effects of rhizobacteria.

So far, the project team has been testing the rhizobacteria isolates against the root rot pathogens in laboratory and greenhouse experiments. And they have advanced some of the promising isolates to further tests either alone or in combination with some of the other disease control agents.

The team is analyzing the data from the experiments so far and is continuing the laboratory and greenhouse testing. Although developing novel disease treatments can be a lengthy process, Daayf is optimistic this project will provide useful information along the way.

“If we are successful in developing one or more good treatments, our soybean growers would directly benefit, even though the formulation and the regulatory steps may take some time if we want to take a treatment to the commercial level. But, as we run these experiments, we learn things we didn’t know before about soybeans and their pathogens,” he explains. “With that kind of knowledge creation, there may be new information that can be integrated into growers’ practices to reduce these diseases…. I’m hopeful the research will provide some clues that will be helpful to soybean growers in Manitoba and elsewhere in Canada, and maybe worldwide.”

The Manitoba Pulse and Soybean Growers and Manitoba’s Agri-Food Research and Development Initiative are funding this research.