In Ontario, interseeding a cover crop into corn is growing in popularity as a way to improve soil quality in a corn-soybean rotation. But just how much cover crop biomass is likely to be produced? How much of an impact will it have on soil quality? And what are the effects on corn and soybean yields? Researchers are putting some numbers to this practice to see how much of a benefit growers might expect.

“Most of the research has been done with silage corn, and there is documented success with interseeding in silage corn. Interseeding in grain corn has also been looked at. The interest is related to the fact that we and other researchers have documented that a simple corn-soybean rotation has some issues with poorer soil quality [such as lower organic matter levels and poorer soil structure] and lower yield potential, as compared to more complex rotations. So the concept is that incorporating a cover crop into a corn-soybean rotation could perhaps mitigate some of those concerns.”
Cover crops need to attain reasonable biomass levels to provide significant soil benefits. Interseeding into a standing crop gives a cover crop more time to gain biomass, compared to seeding after the corn is harvested. “Our growing season is limited by a long winter; there is not a lot of time for a cover crop to be established after corn. Growers are harvesting corn later and later, and they’re planting soybeans earlier and earlier,” Clark explains.

“We hope with interseeding that we can get the cover crop biomass growing within that niche in the corn-soybean rotation and produce the amount of biomass needed to make a decent contribution of soil carbon, and with legumes, to contribute nitrogen to the soil. Also, just having some cover on the soil in that little gap in the growing season helps protect the soil from raindrop power and other erosive forces.”

The plots were interseeded at about the V5 growth stage of corn (five leaf collars); in Ontario, around V4 to V6 has been found to be most successful for interseeding red clover and annual ryegrass. “We wanted the seeding time to be late enough that the cover crop wouldn’t out-compete the young corn crop. But we wanted to seed it early enough for a decent amount of cover crop growth before full closure of the corn canopy [completely blocks sunlight to the cover crop],” Clark explains.

She outlines some of the reasons for choosing red clover and annual ryegrass. “Red clover is already widely used in Ontario so a lot of farmers are familiar with it. It's a legume so it can fix atmospheric nitrogen, and it has been shown in some situations to provide a nitrogen credit to the soil, which can benefit the following crop. Annual ryegrass has been shown to have good biomass potential in certain situations. We included the red clover-ryegrass mix because there has been shown to be synergies from planting a legume-grass mix.”

Deen also notes both red clover and annual ryegrass are able to tolerate some shade. As well, both will overwinter, so a grower would have the option of terminating them in the spring, allowing more time for biomass production. However, both cover crops have challenges with spring termination. “Annual ryegrass has to be terminated in a timely manner in the spring. If it starts into stem elongation, it becomes very difficult to control. With red clover in the spring, all the movement in the plant is from below-ground to above-ground tissues [which hampers herbicide translocation to the plant’s below-ground parts],” he explains.

Herbicide options are limited when interseeding into corn because some soil-applied herbicides used in corn can injure the cover crops. Clark notes, “For our weed control, we exclusively used glyphosate and only applied it before the cover crops were in the ground. We didn’t spray at all once we planted the cover crops until we terminated them in the spring.” A glyphosate-only herbicide system might result in some weed issues because of the lack of residual weed control and the possibility of glyphosate-resistant weed problems. On the other hand, cover crops could help suppress weed growth. The weed biomass data will show the overall effect of interseeding on weed growth.

The project uses corn hybrids and soybean varieties that are typical of the production region, so they are long-season types. Deen explains, “We had considered going to shorter-season types to provide a greater opportunity for cover crop biomass production. But we thought a farmer probably would not be interested in sacrificing yield for the sake of cover crop establishment, and we wanted to keep the project commercially representative.”

The research team is measuring above-ground cover crop biomass at three stages: at corn harvest, at the end of the season, and at termination in the spring.

Preliminary findings
Deen provides a preliminary overview of some of the results so far. “As expected, biomass yields of the cover crops were greater following silage corn than grain corn in 2015.” In the grain corn treatments in 2015, cover crop biomass levels were low at all three locations, even though it was a very good year for establishing cover crops. “The cover crop stands looked reasonably good in mid-July; I would estimate there were 300 or 400 kilos per hectare of biomass. But in the fall there was not much more biomass.”

Some perspectives on options
Deen has been studying cover crop effects in various crop rotations for quite a few years. Based on his experiences, an interseeded cover crop in a typical grain corn-soybean rotation in Ontario doesn’t have a strong opportunity to produce a lot of biomass.

“Our growers like to choose long-season hybrids so they use all of the season. There is little opportunity after grain corn is harvested to have sunlight and warmth available for cover crop growth. As well, the nitrogen availability after grain harvest might be limited.

So, Deen says, “If farmers are absolutely committed to a simple corn-soybean rotation, then by all means, try to get a cover crop into that system, but be realistic about the likely benefits.”
However, he advises, “If you're really serious about obtaining benefits from a cover crop, the real opportunity is to add another crop in your rotation, such as wheat. That gives a proper niche so the cover crop can produce a substantial amount of biomass. Plus the third crop in itself, as we have already demonstrated [in previous research], provides rotational benefits and soil quality benefits.”

Still, Deen is excited that farmers are continuing to explore cover crop options. For instance, he is intrigued by the “planting green” approach some growers are using. “Planting green may be one of the ways to provide more benefit from the interseeding or even the post-corn seeding of a cover crop [such as cereal rye]. In a planting green strategy, you allow the cover crop to overwinter and get some reasonable growth in the spring, then you control it on the day before or day of planting, and plant into it green. So you would have more biomass growth and perhaps some weed control benefits, although you might run into increased risks of problems like moisture depletion.”

Clark adds, “Farmers generally know their own land really well. Taking into consideration your specific context – the weather you know you get, the soil you know you have – is going to be key when you’re thinking of trying any sort of cover cropping approach on your land.” 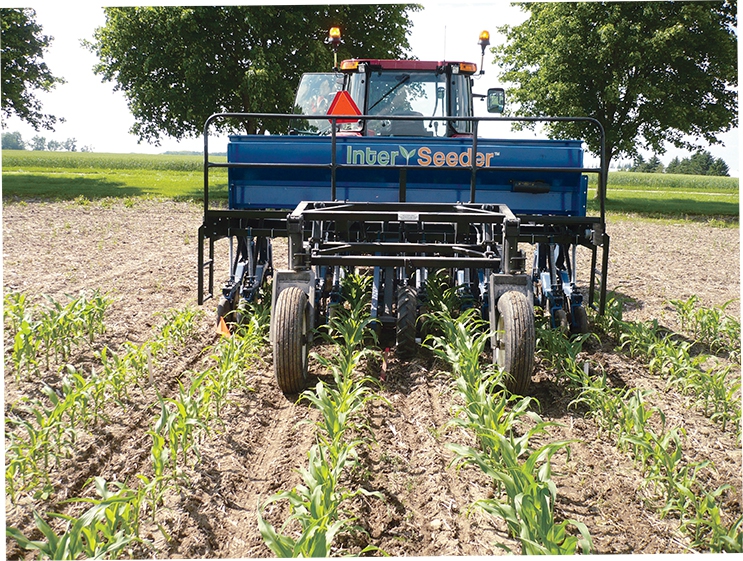 In this multi-location project in Ontario