Good news stories from western Canadian farmers about the many benefits of intercropping have made their way to Ontario. 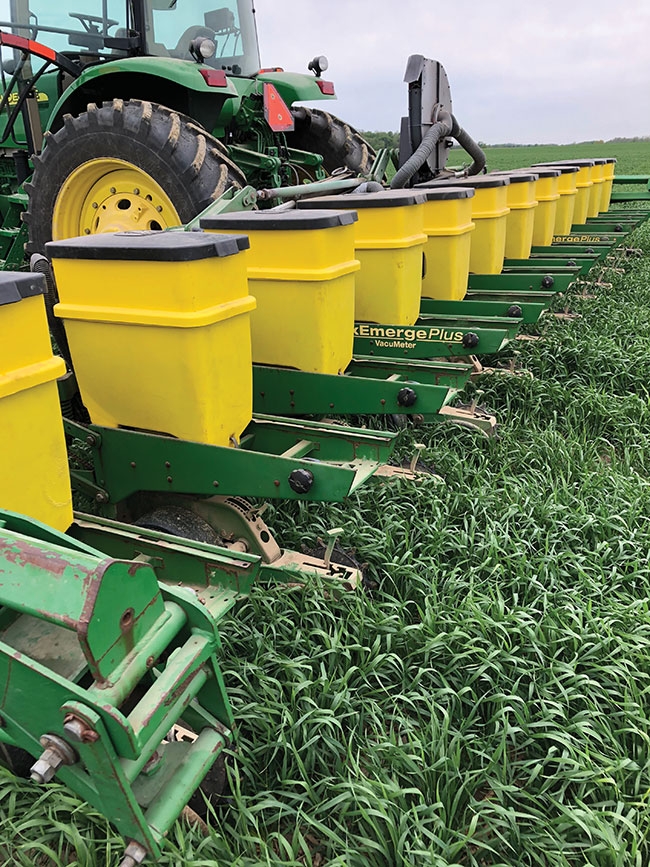 Planting beans between wheat rows on Rick Kootstra’s operation. A risky investment with the potential for profit in the long-term.

East of the Manitoba border, producers have to contend with very different growing conditions. But this hasn’t stopped producers from giving it a shot. This year, Peter Johnson, an independent agronomist, and a small “club” of other interested farmers spread across southern Ontario have started a three-year wheat-soybean intercropping trial. The trial will gather data on yield, as well as moisture, planting and harvesting dates, herbicide and fungicide programs and more.

The program has a small amount of funding from the Ontario Soil and Crop Improvement Association to purchase equipment, but for the most part, these farmers are hoping the project pays for itself in terms of decent yields, useful agronomic data and proof of principle that intercropping can be successful in Ontario.

The biggest challenge facing this system is the length of the growing season, according to Horst Bohner, soybean specialist for the Ontario Ministry of Agriculture, Food and Rural Affairs (OMAFRA). “It’s no different than double cropping, in which a second crop is planted in the same growing season after the first crop comes off. We can’t double crop every year successfully because our season is too short,” Bohner says. “You can likely get both crops off many years when beans are intercropped. But the problem is that both the wheat and soybeans will be so impacted in terms of reduced yield that it doesn’t make economic sense to do it. There are scenarios where it may work, if the wheat comes off early and we have a long fall, that’s why it’s worth doing trials. But it’s a pretty high-risk scenario for much of Ontario.”

Johnson says Bohner has a very good point – producers need a good enough season that soybeans have a chance after the wheat is harvested. But he says the trial has already presented some intriguing results.

On sites where they saw good moisture, both crops were performing well at the time of writing; a site with less moisture saw good wheat but poor soybeans. On the third site, where wheat was planted late, the soybeans were looking very good.

“We’ve learned lots already,” Johnson says. He says the main reason why he is interested in studying intercropping is profitability. Many producers include wheat in a corn-soybean rotation to increase biomass and reduce pest pressure. But wheat often isn’t as profitable as corn and soybeans, and it is always a struggle to keep it in growers’ rotations.

Mike Strang, an Exeter, Ont., producer involved in the trial, says the big question for him is not whether the soybeans will do well, but how well the twin-row wheat will yield. At the time of writing, his soybeans were not doing well due to lack of rain.

“But even if intercropping soybeans doesn’t work out, if I can get twin-row wheat to yield like regular wheat, I think that’s still a win,” he says. “It’s always a struggle to make wheat profitable in Ontario. That’s the main driver for us – can we keep wheat in the rotation and make money? We all grow wheat, or we grow it because it’s good for the soil, but you’re looking at almost a lost year. But if you could still get those benefits of having the wheat in the rotation and make it a profit, that would be a win.”

Mark Burnham, who is running the trial on his operation in Northumberland County, says he already grows wheat in his rotation. “But for us it’s a matter of trying to get more return out of the acres, trying to get two crops, two incomes,” he explains. “If you break even with wheat around here, you’re doing okay – if you make money, you’re doing excellent. The benefit for us is that the following year the yields are better. To get wheat in the relay helps with cash flow and the economics of the whole program.” On Burnham’s operation, which has had a fair amount of rain, both the beans and the wheat were looking good at the time of writing [mid-July].

Rick Kootstra, who is running an independent intercropping trial on his Huron County operation, has planted 150 acres to a wheat-soybean relay intercrop. As far as Kootstra can see, he could be saving money by intercropping, because he’s saving on seed and still hopefully getting good yields. More than that, it’s insurance, because if the wheat crop fails (in yield or financially) he still has soybeans to fall back on. “The point is, with two crops in one field, the risk is mitigated,” he says.

Kootstra believes this trial is worth investing in – which is why intends to stick with an intercrop system for several years. “This is a way to add value to your operation. You have to make a commitment and run it for a few years so that you’re comfortable with the practice. You can’t do a three-acre trial and say, ‘Oh, it didn’t work, that’s it.’ I’m thinking about it in the long term,” he says.