This intercrop combination can reduce risk and provide yield stability. 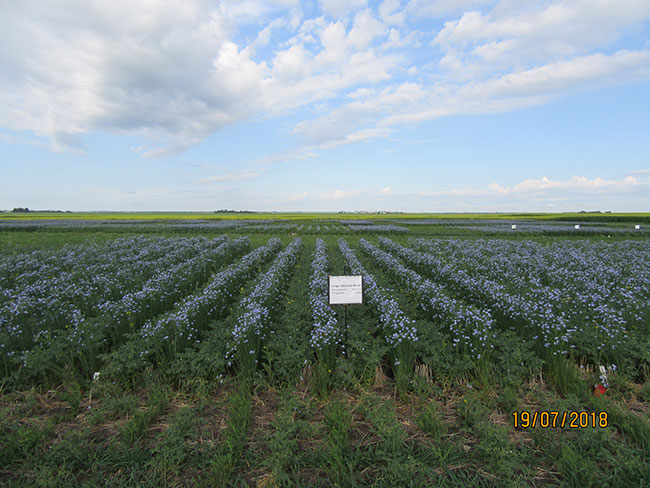 Flax seeding rate of 300 seeds/m2 with 60 kg/ha N in alternate rows with chickpeas. Photo courtesy of Bill May.

Intercropping flax and chickpea has the potential to expand the area of economic adaptation for both crops. Flax can expand into drier areas, hopefully reducing disease severity in chickpeas. For chickpeas to expand into wetter regions, an intercrop with flax can reduce risk and provide yield stability. Chickpeas have an indeterminate growth habit and require drought stress after pod formation for improved seed development and grain yield with reliable, uniform maturity. This drought stress can be induced by a flax intercrop, which provides competition for water and light. Researchers are working to develop an agronomic system for flax-chickpea intercropping across potential regions in Saskatchewan.

In 2019, researchers launched a study at five locations across Saskatchewan to study intercropping chickpea and flax as a way to expand the area of adaptation for chickpea, and also to effectively increase the area of economic adaptation of flax. The locations included Indian Head, Redvers, Swift Current, Saskatoon and Melfort. Researchers are investigating multiple interactions among 22 treatments comparing crop placement (intermixed or alternate rows), flax seed density (zero, 75, 150, 300 and 600 seeds per square metre, or /m2) and N (zero and 60 kg/ha). Unfortunately, due to COVID-19, the trials did not go ahead in 2020, but are expected to continue in 2021 and 2022.

“In the crop placement experiment, the intercrop was seeded either as an intermix of both crops in the same seed row, or seeded as individual crops grown in single alternative rows,” says Bill May, crop management agronomist with Agriculture and Agri-Food Canada in Indian Head, Sask. “In the two crop placement treatments, flax and chickpea density per square metre  stays the same. In Indian Head, there seemed to be benefits from alternate rows, however in Redvers, mixed rows seemed to perform best. We don’t have enough data yet to explain the differences, but hope the next two years will provide more information.”

May notes that for growers, selecting the strategy that works best for them may depend on their objectives. If chickpea is the main crop focus and flax is being grown mostly to reduce disease severity in chickpeas, improve maturity and reduce green seed, then mixed rows are probably just as good as alternative rows. However, if the flax crop is expected to be a bigger component of yield, then using alternate rows can help manage N and increased seeding rates in the flax. Alternate rows can provide the potential to tweak the flax crop to increase the yield in this combination better than mixed rows.

“We do need wetter conditions to see how this intercrop performs and if we can expand the area for growing chickpeas,” May explains. “We are seeing that we can expand the areas we can grow flax as a complement to chickpeas. However, we don’t know yet how far we can expand the chickpea production out to wetter areas until we have more information. Our goal is to come up with a combination that will reduce risk and give yield stability for growers. Some of our preliminary indications are that we can get really big benefits from the flax in the intercrop in wet years, but we need additional data and information.”

From the preliminary results, flax seeding rate is the factor that is having the largest impact on intercropping chickpea and flax. In this study and in previous work, there is good evidence that green seed in the harvested chickpea is reduced by intercropping flax. Chickpeas in an intercrop also consistently mature faster and have produced consistent high-quality grain, while monocropped chickpea yields and quality have been very variable. Increasing the flax seeding rate does decrease chickpea grain yield, but the overall economic return appears to be fairly stable once the flax seeding rate reaches 150 viable seeds/m2) . 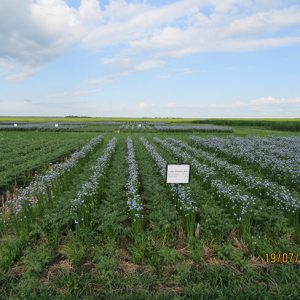 Flax seeding rate of 300 seeds/m2 with zero kg/ha N in mixed rows with chickpeas. Photo courtesy of Bill May. 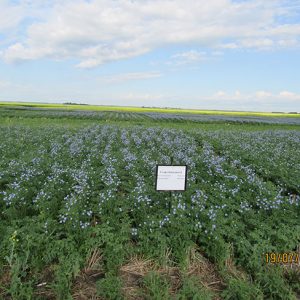 Flax seeding rate of 75 seeds/m2 with 60 kg/ha N in mixed rows with chickpeas. Photo courtesy of Bill May.

Generally, under low disease pressure, increasing the flax seeding rate also decreased disease incidence in chickpea. The results showed that the flax seeding rate had a significant impact on disease severity in both Redvers and Melfort, as well as on relative humidity and temperature in the canopy microclimate. However, the results were very different between the two locations. As expected, under more humid conditions in Melfort, intercropping flax with chickpea was associated with less severe disease and decreased relative humidity. However, the Redvers results showed the opposite, with higher flax seeding rates and reduced disease coinciding with higher relative humidity and lower temperatures. This relationship between chickpea/flax intercropping and canopy microclimate will be evaluated further over the rest of the project. Researchers are also assessing pasmo disease in flax.

“The most encouraging finding so far is that including flax in the intercrop provides yield stability and consistent gross returns,” May explains. “When comparing the effects of flax seeding rates on the combined gross return of chickpea and flax, the results showed that at the 150 seeds/m2, the gross returns of the intercrop are reasonably consistent. The gross returns/ha of the intercrop at the flax seeding rate of 150 seeds/m2 averaged between $1,750 and $2,000 in 2019. Although the gross returns of the chickpea monocrop was higher, at around $2,500 to $2,700 per hectare, in wet years, a chickpea monocrop can also have zero yield with little-to-no returns. So having the flax and chickpea intercrop provides a consistent stable return every year, rather than a hit and miss of chickpeas alone as we have experienced in Indian Head and other locations in some years. A wider range of environmental conditions, including wetter conditions in our trials, are required during the growing season to fully describe this relationship.”

As the research continues over the next couple of years, May expects they will have more information about how far the area that chickpeas can profitably grow with an intercrop can be expanded. It definitely is not just for the drier areas and he expects that the Saskatoon area for example should be well adapted to an intercrop mix, but that Melfort will likely be too wet. May notes there are some key considerations for growers to think about and that every ecosystem is different, so growers need to find out what works best on their own land.

“It is really a continuum of what you are trying to achieve, depending on your ecoregion or area of adaptation, and how much risk is involved in growing chickpeas in that area,” he says. “There are several objectives and they apply to different regions as you move from location to location. If chickpeas are being grown in an area where disease pressure is a concern, then flax should be a major component of the intercrop. Finding cultural practices that help manage disease pressure in chickpea is important, and intercropping chickpea with flax is a cultural practice that can help reduce disease pressure, green seed and improve maturity and yield.

“In regions where it is typically too wet to grow chickpeas, or on the edge – where half the time chickpeas can be successfully grown and the other half they can’t – then including flax as an intercrop can help stabilize the chickpea yield and overall gross returns for the intercrop. A flax-chickpea intercrop can help reduce risk, improve yield stability and maintain gross revenues.”