A simple, low-cost way to give a boost to field pea standability. 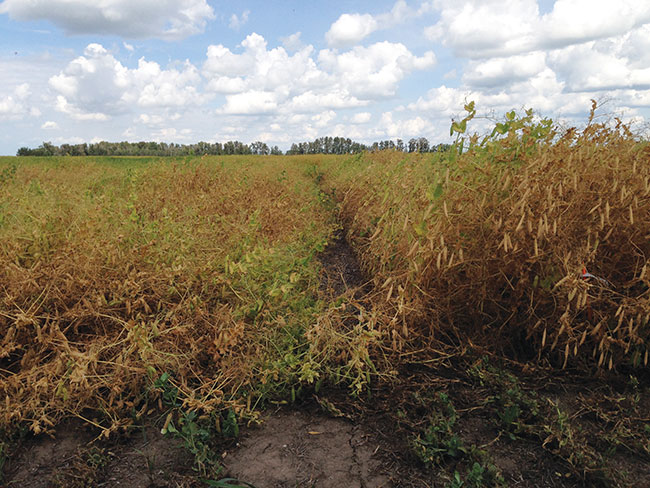 Field pea lodging is a big problem in productive growing environments. “When the crop is very badly lodged, growers can take as much as five days to harvest a quarter section of peas,” says Sheri Strydhorst, an agronomy research scientist at the University of Alberta. “After a couple of experiences like that, you can see why a grower might say, ‘I’m never growing peas again!’”

Inter-row stubble seeding involves planting a crop between the rows of standing stubble from the preceding crop. Strydhorst was interested in this practice because some previous research and field-scale demonstrations in Australia and Canada had shown that it improved pea standability, but there was limited information on how it affected pea yields. “In the Alberta context, Steve Larocque with Beyond Agronomy had been working on inter-row seeding. He found that, although the peas might lean over, the wheat stubble is like a little bit of a fence that helps the peas from lying completely flat on the ground.”

Regarding PGRs, Strydhorst knew from her own research and other studies that foliar applications of PGRs can help reduce lodging in cereal crops. “Although no PGRs are registered for use on field pea in Canada, I began to think we should see if PGRs might reduce lodging in pea crops,” she says.

“A little work had been done on field pea in India using a product with the same active ingredient as Manipulator, but results varied. A greenhouse study in Alberta had found that Ethrel reduced pea height, but as a greenhouse study it didn’t assess the effects on lodging under field conditions. So we wanted to look at the effects of PGRs on field pea standability in more depth.”

The main funders of Strydhorst’s project were the Alberta Crop Industry Development Fund and the Alberta Pulse Growers. 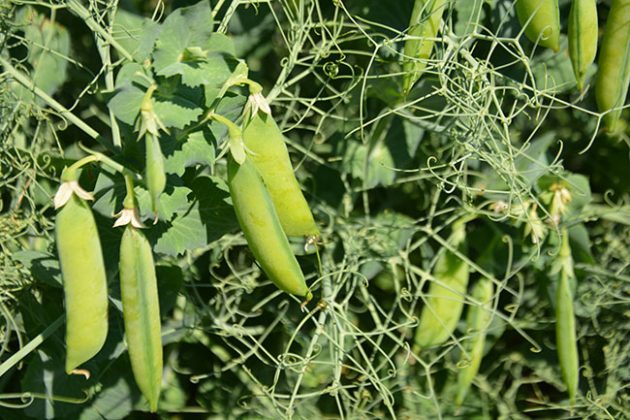 Field pea lodging is a concern for growers, but researchers are trying to reduce this problem. Photo by Top Crop Manager.

A little lift from inter-row seeding
In the inter-row experiments, the project team grew AC Foremost wheat in the year prior to field pea. The wheat stubble was cut to heights of zero, 20 and 30 centimetres. In 2015 and 2016, they seeded CDC Meadow, a commonly grown pea with typical lodging resistance, in between the wheat stubble rows.

This improved standability occurred despite the fact that the pea plants in the tall stubbles tended to be taller. “Compared to the zero stubble height, those standing stubbles increased the height of the pea plants about 83 per cent of the time. At maturity, those plants were one to four centimetres taller, so not drastically taller. We think this height increase is due to the plants elongating at early growth stages to find light between the stubble rows.”

She also notes, “The standing stubbles didn’t impact pea yields, and the 1,000-kernel weights increased in two of six site-years, so we were quite happy with that.”

On the downside, the tall stubble plots had lower seed protein in two of the six-site years. In one case, the reduced protein content was likely due to pea leaf weevil feeding on the root nodules, resulting in decreased nitrogen fixation. In the other case, unusually wet growing conditions increased yields, and Strydhorst thinks there was a small nitrogen dilution effect where the higher yields were compensated by lower protein.

PGRs a letdown in peas
The PGR experiments were conducted in 2015 and 2016 with CDC Meadow, and in 2017 with both CDC Meadow and AAC Lacombe, a high-yielding pea cultivar with typical standability. The project team evaluated three PGRs at two rates on the two cultivars. None of the PGRs are registered for use on field pea.

“The PGR results were very disappointing. The first PGR had no impact at all on any of the agronomic traits, yield or quality,” Strydhorst says.

“The other two PGRs had really negligible effects on standability. They did not consistently affect plant height, and they didn’t have an impact on maturity or significant effects on protein content. And where there were any responses, those responses were incredibly small and inconsistent.”

Pea yields were reduced when the PGRs were applied under the drought conditions that occurred at Bon Accord and Falher in 2015, when growing season precipitation was about half the long-term average. She notes that yield reductions also occur in other crop types when PGRs are applied under dry conditions.

Strydhorst concludes, “We don’t recommend PGRs as an agronomic tool for improving standability of field peas. This result was disappointing, but it’s better that we find it out in small plots than in farmers’ fields.”

Inter-row recommendations
Based on the project’s results, inter-row stubble seeding can be an easy, low-cost practice to help reduce lodging in field pea. It requires a GPS guidance system, but Strydhorst thinks most Alberta farm operators have a GPS system on the tractor that they use for seeding.

“Producers just need to cut their wheat stubble at a tall height. They should avoid heavy harrowing because they need to keep that stubble standing nice and tall; the wheat crop needs to be harvested under very good conditions with excellent straw and residue spreading,” she explains.

“Then in the spring when they are seeding their pea crop, they simply use their GPS to nudge their seed drill so the openers are in between the wheat stubble rows.”

She adds, “At the end of the day, what growers really need is a better standing pea. Breeding for standability is definitely a goal in pea breeding programs. Although we’re not there yet, growers should be on the lookout for new pea varieties with improved standability. In the meantime, inter-row stubble seeding provides a bit of a boost to standability that could help.”