Growing corn in Ontario comes with a special set of challenges. Most Ontario growers rely on conventional tillage to ensure timely planting in the spring, but the practice has left fields increasingly vulnerable to erosion.

Ben Rosser, the Ontario Ministry of Agriculture, Food and Rural Affairs (OMAFRA) corn industry program lead, has a few ideas for changing that.

Rosser just wrapped up a two-year project developing a simple one-pass spring strip-tillage system with the ultimate goal of maintaining corn yields while reducing erosion in Ontario fields.
“Strip tillage offers a middle ground between conventional tillage and no-till,” he says. “Some guys don’t like no-till, because it might take too long to get out in the fields in a wet spring and plant. Strip tillage only works the part of the field that you’re going to plant. It leaves everything else untouched.”

Some early commercial designs became available in the 1980s, but interest has been relatively limited in Ontario until lately.

Rosser took over from former corn industry lead Greg Stewart last October. He says the project was a long-time interest of Stewart’s, who believed once a few barriers had been eliminated, more growers might be attracted to strip tillage.

Modern technology has made strip tillage more attractive. With GPS guidance systems, the planter can stay on the strips, and with the potential to deliver full season nitrogen (N) fertility with newer, physically protected forms of N such as Environmentally Smart Nitrogen (ESN), strip tillage may increase efficiency relative to having to return to sidedress, Rosser says.

The study utilized a six-row Dawn Pluribus Strip Tiller mounted to a Yetter caddy cart with a Gandy Orbit-Air dry fertilizer box. In 2014, fertilizer was mixed between the coulters, but in 2015 Rosser included side band tubes, which delivered one-third of the fertilizer in a band to the outside edge of the coulter.

In 2015, six separate trials were performed at farms in Arthur, Belwood, Bornholm, Elora, Paris and Woodstock. A seventh looked at contour strip tillage near Belwood to develop guidance lines that would precisely follow the variations in the field.

Rosser’s key research concerns were evaluating the yield response of strip tillage versus conventional tillage or zero tillage and the yield impact of moving phosphorus (P) and potassium (K) fertility treatments off the planter and on to the strip tiller. He also examined the safety of using urea or ESN blends through the strip tiller as a way to meet full-season N requirements.

Benefits and drawbacks
After two years the study showed strip tillage did not offer a yield benefit on any of the six sites, although data suggests there might be a yield benefit for medium to heavy soil types. But neither did the strip tillage yields show a decrease compared to those of no-till or conventional systems.

The 2014 Field Crop Report for OMAFRA on the study offers an economical reading of the data from the trial, compared with conventional systems, which Rosser carried into the 2015 report. “One might argue that the elimination of other tillage practices is made possible ($35/acre); one broadcast application of fertilizer is eliminated ($12/acre), and a sidedress application of N may also be eliminated ($15/acre),” it reads.

In addition, it continues, the planter does not require any special conservation tillage modifications and does not need to apply fertilizer, which could represent savings of $5/acre. The strip tillage operation, if applying fertilizer, can be estimated to cost $25/acre, so potential, overall cost reductions are estimated at $42/acre.

But the biggest benefit, says Rosser, is the reduction in erosion — with strip tillage, only a third of the field is disturbed.

Wes Hart, who grows corn, soy and wheat just north of Woodstock, was a farmer co-operator for both years of the study.

“I joined the study because I’d been interested in strip tillage for a while, and I’d just come into running our farm,” he says.

“One of the main things I was interested in with Ben’s system is that I wanted him to use my fertilizer in his strip till. We used my package in the strips, and we didn’t lose anything. The main difference is that there’s another pass on the field with a separate machine, but sometimes that’s worth it.”

The chief benefit of the system, for Hart, was the ability to put fertilizer down through the strip tiller. “That’s one of the holdups of my current setup,” he says.

Inspired by the study, Hart built a fertilizer banding rig that is “virtually a strip till piece of equipment.”

Rosser says a key benefit for the producer of using a strip tillage system — beyond erosion control — is the reduced number of passes over the field. But strip tillage is still more management intensive than conventional tillage, he says, because producers have to carefully plan when to hit their strips. “You have to match up strip and planter pass closely,” he says. “If you wait too long to plant, the ground may get too hard. This means more management, which might hold a farmer back relative to costs.

“If you feel you can manage that, our data suggests that strip tillage can be fairly competitive to conventional tillage.” 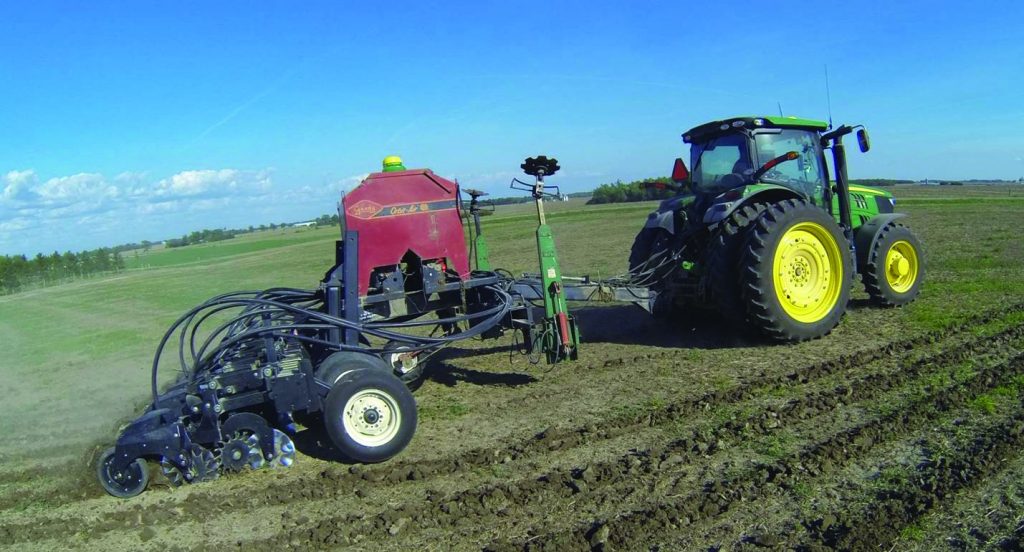