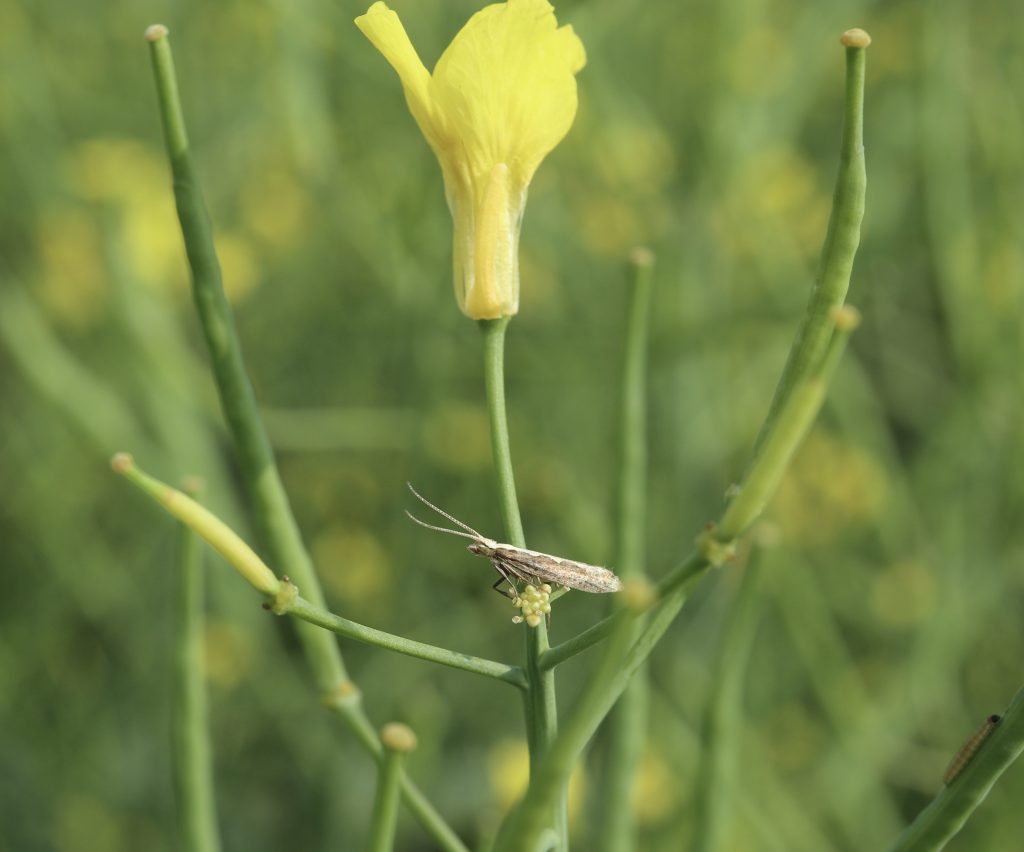 Adult diamondback moth on canola raceme. Diamondback moth is a major pest of cole vegetable crops in the southern US and are well-known to be resistant to certain insecticides. Photo courtesy of Jennifer Bogdan.

Colorado potato beetle has become the classic example of insecticide resistance in Canada, with parts of Manitoba seeing increased resistance to some commonly used insecticides in recent years. Further into the Prairies, alfalfa weevil resistance in southern Alberta alfalfa seed production fields has become more of a well-known problem.  But for farmers growing annual crops, which insects pose the greatest threat for developing resistance?

Boyd Mori, assistant professor in the Department of Agricultural, Food and Nutritional Science at the University of Alberta, is exploring the possibilities.

“Diamondback moth (DBM) and soybean aphids are two migratory pests from the United States with known insecticide-resistant populations.  Diamondback moth is of particular concern because, globally, their populations as a whole (not individual populations) have developed resistance to almost all of the insecticide classes, including the newest modes of action. Since we know that some DBM populations in the U.S. are resistant to certain insecticides and these insects migrate here on winds from the southern states, we should keep our radar on any insecticide performance issues with this insect,” he says.

In the U.S., DBM resistance has been long documented.  There were complaints about the lack of control of DBM with pyrethroid insecticides in canola fields in North Dakota this past year. The Crop and Pest Report from North Dakota State University on Aug. 26, 2021, reported that some canola fields were sprayed up to two times with a pyrethroid insecticide without adequate control of DBM larvae. Experts from NDSU suspected that the migrant DBMs that arrived in these areas were resistant to pyrethroids and recommended that farmers avoid using this insecticide class, and rotate to a new mode of action.

Without a doubt, cases of insecticide resistance that hit so close to home are a reminder of the potential for issues in our own fields.

Evaluating the ever pesky flea beetle

In recent years, flea beetles have become one of the primary pests of canola on the Prairies. Two main species, the striped flea beetle and the crucifer flea beetle, are predominantly responsible for causing damage. Neonicotinoid insecticides (‘neonics’) have been used as a standard ingredient in seed treatments on canola seed for flea beetle control since 2001, due to the phasing out of lindane in 2004. However, with the concern that neonics could be removed from the market by the Pest Management Regulatory Agency during the re-assessment of these products starting in 2014, Mori recognized that canola farmers would have limited seed treatment options and may have to default to using more foliar insecticides for flea beetle management.

“We were worried about the potential loss of the neonics so we felt a need to reevaluate the tolerance of both striped and crucifer flea beetles to the neonics. The last time this research was conducted was over 14 years ago, when it was found that striped flea beetles were more tolerant to the neonics. We wanted to retest the neonics to determine if the susceptibility of either flea beetle species has changed.  We also wanted to evaluate flea beetle tolerance or susceptibility to the newer seed treatment chemistries and the commonly used foliar insecticides in order to establish a baseline tolerance for these active ingredients,” explains Mori.

Another component of Mori’s research will involve the use of genomic sequencing in order to learn more about striped and crucifer flea beetle biology and physiology. “Our aim is to investigate the underlying genetic architecture which may contribute to differences in insecticide susceptibility, overwintering, and behaviour. How can a flea beetle use canola and other brassicas when they contain glucosinolates and other insect deterring compounds? Why are striped flea beetles more cold tolerant and emerge earlier in the spring than crucifer flea beetles? If we knew what genes these insects use to breakdown toxic compounds or what genes could be involved with overwintering, we would better understand why flea beetles are the way they are, and we could perhaps make better management decisions,” he says. 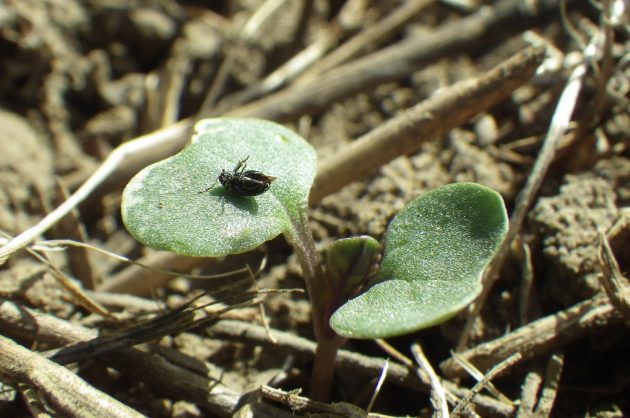 Dead flea beetle on canola cotyledon. New research on the tolerance or susceptibility of flea beetles to commonly used insecticides will help determine where the Prairies are at when it comes to insecticide resistance in striped and crucifer flea beetles. Photo courtesy of Jennifer Bogdan.

Mori’s work will also include studying the transcriptomes of both flea beetle species. He explains the genome is all of the genes in an individual, but not necessarily all genes are expressed and made into proteins. Evaluating the transcriptome allows for identification of expressed genes. What Mori’s group intends to do is make transcriptomes to use as a different method of looking at insecticide resistance.

“With striped flea beetles, we can make a transcriptome after they’ve fed on neonic treated seed to see if, for example, there’s an increase in metabolic genes which contribute to their survival.  We’ve always called this ‘tolerance’ in striped flea beetles. But maybe this species has always had some method of detoxification of neonics, rather than a function of them developing resistance to this chemistry after feeding on treated seed – maybe they’ve had a natural tolerance all along. Once we are able to sequence the genome and transcriptomes, we could then evaluate the use of these genes for other control technologies, such as RNAi,” he says.

Until his project is complete, Mori recommends following best practices to establish a healthy, vigorous canola crop to be able to withstand some flea beetle feeding damage, as well as using economic thresholds and spraying foliar insecticides only when necessary.

Mori concludes: “So far, we’ve been lucky on the Prairies when it comes to insecticide resistance. Part of it is because a lot of our pests have only one generation per year, so we’re not spraying multiple times during the growing season. Also, because of our crop rotation, pests like flea beetles have to move from one location to another, and our winters are good for killing insects and limiting their generations in-season. With our annual crops, we often don’t have pest populations that require insecticide treatment, and if we do, a single application is usually sufficient. Alfalfa weevil is the perfect storm because alfalfa is a perennial grown in the same field every year, so the weevil population also stays in that field and resistant survivors are able to increase their populations. From a chemistry standpoint, hopefully we will see newer actives that are softer on non-target species and more selective on pest species. We’ve already lost chlorpyrifos as an active ingredient and other products will continue to be re-evaluated. Overall, we’ll probably end up losing more insecticides than we’re gaining, which is more of a reason to preserve our current actives for future use.”