What doesn’t kill a bug sometimes makes it stronger…or bigger, or longer lived, or able to lay lots and lots of eggs. This biological phenomenon is called “hormesis.” It is an area of growing interest for entomologists, including those who study the effects of insecticides on insects. And it has important implications for agriculture.

Hormesis refers to an organism’s response to a stressor, where a low dose of the stressor causes a stimulating effect, like increased reproduction, and a high dose is very damaging or lethal. In the case of an insect, stressors could include things like insecticides, temperatures outside of the insect’s comfort range, insufficient food, and insufficient oxygen. But hormetic responses are not limited to insects. They have been observed in many, many organisms, ranging from microbes and plants to humans.

How hormesis actually works isn’t completely understood. “Probably the most commonly cited general theory is the idea of overcompensation. Systems that affect growth and reproduction [in insects and other organisms] are self-regulating and work on feedback mechanisms. So any sort of disturbance to those processes can result in the system trying to correct and overcompensate for it,” explains Chris Cutler, an associate professor with the department of environmental sciences in Dalhousie University’s faculty of agriculture.

For instance, let’s say an insect is exposed to a low dose of a poison that causes its reproductive system to go slightly out of whack. According to the overcompensation theory, its reproductive system will attempt to counteract the problem but will temporarily overshoot its response, leading to higher reproduction. “In a general sense, I think that is kind of how hormesis operates, but we still have a lot of the nuts and bolts to figure out,” Cutler says.

He explains that hormetic responses have evolved over millions of years as mechanisms for organisms to deal with low amounts of stress. So hormesis has always been around. However, it’s only recently that scientists have been identifying such responses as an actual phenomenon. “I think in the past, researchers would often look at [a hormetic] result and say ‘that’s weird’ or ‘that’s an outlier,’ and not really have a word to describe it. Those types of papers have gotten lost in the literature decades ago, but you can find them if you look hard enough,” he notes.

“We’ve documented incidents of hormesis in all sorts of insects, dozens of species across many different families and orders of insects, exposed to many different types of stress, whether it’s an insecticide stress, nutritional stress, temperature stress, radiation stress. So hormesis occurs widely and the concept is now pretty well accepted by researchers, and people are really starting to catch on to the idea.”

Cutler began his research on hormesis completely by accident. “I did my PhD research at the University of Guelph and was working with the Colorado potato beetle. In one of my experiments with an insect growth regulator, which is a more selective or more friendly type of insecticide, I was exposing eggs to the insecticide. I was expecting deleterious effects, like smaller eggs, eggs that wouldn’t hatch, and that type of thing. But in one experiment, I saw that at the low dose the survival and weight of the larvae were higher than in the control. At first I thought I’d got the concentrations mixed up or something. So I repeated the experiment a couple of times and got the same result. And I stumbled on this idea of hormesis, which at that time [about a decade ago] had not garnered much attention at all in insect circles.”

At present, the hormesis research at Cutler’s lab focuses mainly on insecticide-induced responses of various insects to various insecticides. “We’ve been using green peach aphid as a model. It is a widespread insect pest occurring all over the world, attacking lots of different crops, and insecticide resistance is a big problem in that insect,” he notes.

For example, he and his lab have been looking at how this aphid responds to imidacloprid, a commonly used neonicotinoid sold under various trade names, such as Admire. Their research shows that when the aphid is exposed to low doses of imidacloprid, the aphid’s reproductive output goes way up. Cutler says, “We’ve shown this in laboratory and greenhouse experiments where, after a few weeks, the population of the aphids on a plant can double due to exposure to the insecticide that is supposed to kill them.”

In a field situation, many different factors can lead to less-than-lethal doses of insecticide. “Insecticides break down over time. Sunlight will break them down. They are subject to microbial degradation. They are subject to wash-off by the rain. Also, drift can occur, so you may be trying to apply a high dose but the wind takes it so you get a low dose on the plant. And you have canopy effects when you spray so you don’t get as high a dose under the leaves or further down the plant,” Cutler explains.

“So inevitably you’re going to get insects that are exposed to these sublethal doses. And some of these low doses could be hormetic.”

Cutler sees many possible implications of hormesis for agriculture. One obvious one is that insecticide-induced hormesis could make a pest problem even worse by causing pest resurgences and secondary pest outbreaks. Pest resurgence is when the population of an insecticide-treated pest increases rapidly to even higher numbers than before the insecticide was applied. A secondary pest outbreak refers to a rapid population increase in a pest species that had been less important than the target species until the insecticide was applied.

Pest resurgences and outbreaks are often assumed to be due to the harmful effects of the insecticide on the pest’s natural enemies (the predators and parasitoids that attack it). But that assumption isn’t necessarily correct in all cases. Cutler explains, “There have been experiments that have excluded that possibility and shown the outbreak in the field – whether it’s due to aphids or thrips or leafhoppers – is directly due to stimulation from the insecticide.”

The degree to which insecticide-induced hormesis is contributing to pest resurgences and outbreaks in agricultural fields is not yet known. However, it has been documented in many field situations.

Insecticide-induced pest resurgences and outbreaks could clearly have serious impacts on susceptible crops, and could prompt farmers to apply more insecticides, raising their input costs and increasing the risks of insecticide resistance and negative impacts on the environment.

On the other hand, hormesis has positive implications for businesses that rear insects. “Insect rearing is a billion-dollar industry. Insects are reared for a lot of different purposes – for use in research, food for pets, food for people. Honeybees are reared for honey and pollination,” Cutler notes. “I think we can probably harness some of these hormetic principles for rearing these beneficial insects. It has been shown, for instance, that when you are rearing insects like Caribbean fruit flies for sterile insect release (SIR) programs, if you deprive them of oxygen for an hour, that mild stress can prime them to become better at finding mates, become better at emerging, have lower mortality and longer life spans. So this type of preconditioning hormesis can improve the performance of those insects later in life.”

In his current research, Cutler is delving into a number of different aspects of insecticide-induced hormesis, with the help of funding from the Natural Sciences and Engineering Research Council of Canada.

“One of the things we’re doing is looking at this idea of priming, so can mild exposure to one stress condition the insect to deal [more effectively] with subsequent stresses later in life or in subsequent generations? We’re looking at that in aphids.”

Cutler and his lab are also examining the possibility that hormesis may be contributing to insecticide resistance. “We’re looking at a couple of different angles there. We want to see if exposures to low doses of insecticide that may cause hormesis also induce the insect to produce more detoxification enzymes. When you and I or insects are exposed to poisons, we have enzymes that break down those poisons. So, if the insect is exposed to mild doses of insecticide, do we see more of those enzymes?” he says.

Cutler is also investigating insecticide-induced hormesis in bees. He does a lot of research on bees and pesticides, so he’s well aware that pesticides are an important risk factor for bees. But he wondered whether insecticide-induced hormesis might occur in bees since it has been found in so many other insects. He recently published a paper identifying evidence in the literature that low doses of insecticide stimulate longevity, learning and memory of bees. Now he’ll be pursuing that idea in his own experiments.

What you can do
Although there is still much to learn about hormesis, especially under field conditions, Cutler offers a few suggestions for practices that could help reduce the risk of insecticide-induced hormesis on your farm.

One practice is to keep an eye on the pest population after pesticide applications. “I suspect that rapidly reproducing pests like aphids, leafhoppers and mites are more prone to outbreaks and resurgences from hormesis, although this has yet to be tested. This might be particularly true for insecticides that degrade to sublethal concentrations more quickly or for systemic insecticides (seed treatments) that work against early season pests but will be at sublethal amounts for most insects after a few weeks.”

Second, minimize drift and ensure good plant coverage when spraying insecticides. “This will minimize exposure of the pests to sublethal concentrations that might induce hormetic responses to stimulate their population growth.”

And third, avoid cutting insecticide rates below those recommended on the label. “As many growers will know, cutting rates is usually problematic because it can ‘encourage’ development of insecticide resistance while increasing the chances of suboptimal pest control. At the same time, exposure to these lower sublethal concentrations could stimulate reproduction of certain pests, possibly creating a double-whammy for the grower.” 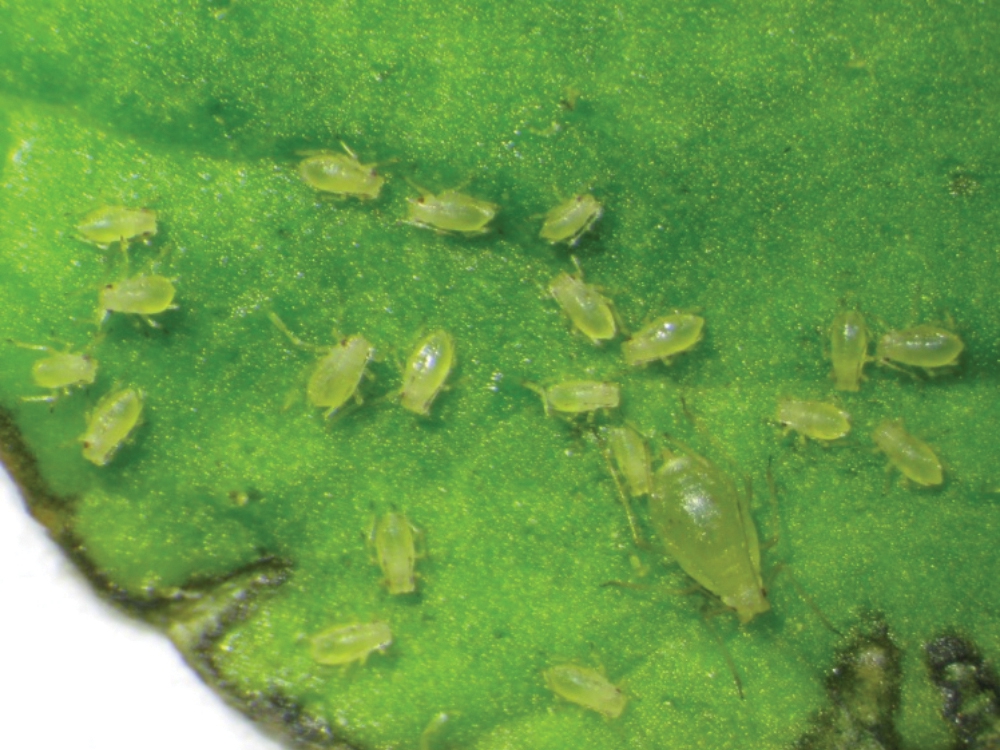 
Related
Syngenta receives registration for Fortenza insecticide as a seed treatment on soybeans
Prairie insects: The good, the bad and the ugly
Manitoba crop insects in 2016
DuPont Pioneer approved to sell new insecticide