An early and dry spring hindered crop growth and gave a leg up to early season insects like cutworms, grasshoppers and flea beetles in some areas of the Prairies.

Pests of all crops
Cutworms were reported in crops by mid-May. The earliest reports in Saskatchewan were in lentil and pea in the southwest followed by lentil infestations in central Saskatchewan and lentil and flax in the west central region. Cutworms included the usual species – pale western, redbacked and bristly – as well as other undetermined species, Scott Hartley, provincial insect specialist with Saskatchewan Ministry of Agriculture, says.

John Gavloski, entomologist with Manitoba Agriculture, Food and Rural Development, reports cutworm populations were generally still a concern in Manitoba in 2015. Some canola and sunflower fields had insecticide applications, and cutworms were also a concern in some soybean fields in eastern and central regions of Manitoba.

In Saskatchewan, the risk from grasshoppers was highest in the southwest and lentil was the most common crop reported where the economic threshold is low (two grasshoppers per square metre). Green lentil was closely monitored due to the projected higher value of the commodity. Grasshopper infestations were also reported in other areas, with one of the most unusual being in the northeast, in hemp.

Grasshoppers were a minor concern in Manitoba and Alberta.

The 2016 Saskatchewan Grasshopper Forecast map indicates low risk for most regions of the province. Several areas on the map are identified as “very light” risk in southern and west central regions. The highest risk appears to be in the north, where light to moderate infestations were noted west of Meadow Lake and near Big River.

In Manitoba, grasshopper populations were generally low in the August survey, indicating a reduced risk overall of economical levels of grasshoppers. Highest average counts were in northwest Manitoba, but even these were in the light risk range. However, farmers and agronomists are still encouraged to monitor field edges and areas where grasshopper emergence is known to be highest in June to gauge what levels are like in preferred egg laying sites.

Aphids were reported in various crops throughout Saskatchewan from mid-July and into August. Hartley says the first reports were in lentil in the southwest. Pea and lentil were the most common crops infested but canaryseed (south) and fababean (northeast) also had high populations of aphids in some areas.

Scott Meers, provincial entomologist with Alberta Agriculture and Forestry, says some aphids were observed in 2015, although not at economic levels. Aphids also did not reach economic levels in cereal crops in Manitoba. Aphid infestations are not predictable because some species, such as those that feed on cereal crops and soybeans, blow in on the wind.

Canola pests
In Saskatchewan, Hartley says the warm and especially dry spring resulted in some of the highest flea beetle pressure observed in canola and mustard crops in several years. Although temperatures were higher during the day, dry conditions and low overnight temperatures resulted in slow growth and more vulnerable seedlings. Since seed treatments have a limited period of efficacy, foliar insecticides were required in some cases.

Flea beetles in canola were also a concern in Manitoba in 2015, Gavloski says. While the use of seed treatments to manage early-season flea beetle populations continues, feeding damage to young plants at or above threshold levels and additional use of foliar insecticides was quite common. Some canola fields were reseeded because of high levels of damage from flea beetles, or a combination of flea beetle feeding and other stresses on the plants.

Meers says the cabbage seedpod weevil continues to expand its range. South of Highway No. 1 is the primary area, but it moved north of that in 2014 and was found in the Lacombe area in 2015, although not at threshold levels.

“If your canola field is first into flower, it will have higher risk,” Meers says. “If you farm south of Red Deer, scout as your canola comes into flower.”

In Saskatchewan, the cabbage seedpod weevil is also expanding its range north and east of the southwest, where severe infestations are still most notable. In 2015, insecticide application for control of the cabbage seedpod weevil was reported across the south to east of Regina. Infestations north of the South Saskatchewan River are nearing economic levels but control has not been as common as in the south, Hartley says.

Diamondback moth blows in every year from the U.S. and adult moths are monitored with pheromone-baited traps. Generally, populations were low across the Prairies.

Bertha armyworm populations were low and uneconomical across the Prairies. Meers says the numbers are really down but that farmers and agronomists should continue to monitor for the insect, as the numbers start to rise the year before an outbreak.

Swede midge was first identified in 2007 in northeast and east central Saskatchewan. Agriculture and Agri-Food Canada (AAFC) continues to study the insect to determine distribution, damage and potential management options for this pest in Saskatchewan. Distribution of the swede midge is surveyed through visual inspections and with pheromone traps. The insect was found in canola fields across the northern regions from Nipawin and Carrot River in the east to areas around Lloydminster. The highest populations still appear to be in the northeast area of the province. Actual yield loss due to the swede midge in Saskatchewan has yet to be determined.

Swede midge was not detected in traps in Manitoba. Low levels of larvae were found in flower buds in less advanced canola in the northwest in mid-August. Farmers and agronomists in Alberta along the border near Lloydminster should scout their crop for swede midge.

Hartley says high populations of cabbage butterflies were reported across Saskatchewan in early August. They are not considered to be a problem on canola if plant growth is healthy and the larvae are not feeding on pods. However the extremely high numbers were a concern, especially in commercial cruciferous vegetable production.

Cereal pests
Spraying for wheat midge was reported primarily in the areas identified in the Saskatchewan 2015 wheat midge risk map, in the southeast and east central regions. In Manitoba, wheat midge was generally not a major concern in 2015. The only reports of insecticide applications for wheat midge were from western Manitoba, and only for a small amount of acres. In some regions, a lot of wheat was already flowering by the time of wheat midge emergence.

The 2016 Saskatchewan wheat midge forecast map indicates high risk for wheat midge infestations, especially in southeast Saskatchewan. The area of high risk extends north, into the east central region of the province. Pockets of moderate to high risk were also identified around Prince Albert and south around Birch Hills (RM 431) through to Nokomis (RM 280).

Meers says cereal leaf beetle continues to be found in Alberta, but infestations continue to remain below the threshold of one beetle per flag leaf. The parasitoid Tetrastichus julis seems to be keeping the population below threshold. Meers cautions that farmers should resist the temptation to spray if populations are below threshold, as that can harm the parasitoid population.

Gavloski says armyworms were a concern in many small grain fields. Most of the insecticide applications for armyworms occurred in July; by the end of July larvae were pupating and no longer an issue. In some fields it was the lodged areas where armyworm populations were high. Some head clipping in winter cereals was noted. There appeared to have been very high levels of a parasitoid of armyworms, a species of wasp called Cotesia. Clusters of pupal cases of this parasite, which were often misidentified as eggs, became very noticeable on the heads in many cereal fields in mid-July.

Overall, populations of European corn borer appeared higher in 2015 than the past few years in Manitoba, and their presence was noted from several crops. Some insecticide applications to corn for corn borer management occurred in the central region.

Pests of pulses
Overall, the level of pea leaf weevil feeding damage was lower in 2015 in Alberta. This is especially true in southern Alberta but experience has shown the level of pea leaf weevil activity observed is sufficient to cause significant damage if conditions are favourable in the spring of 2016. The most severe damage in 2015 was in areas southeast of Lethbridge and in central Alberta in Red Deer and Lacombe Counties. For any producers south of Highway 9 and along Highway 2 up to Leduc, there is risk of damaging levels of pea leaf weevil in 2016.

In addition, in 2015, significant pea leaf weevil damage in Alberta was seen on fababeans in a much larger area than shown in this survey on field peas. This insect causes as much or more damage on fababeans. The true economic damage of this insect on both peas and fababeans on the higher organic matter soils of central Alberta is not well understood.

The highest levels of damage in Saskatchewan were identified north of Maple Creek near the Alberta border, with moderate damage noted to the east and in the Swift Current area. Low levels of damage were noted as far east as RM 163 (Mortlach area). Slight damage was noted up to the South Saskatchewan River but not on the north side. 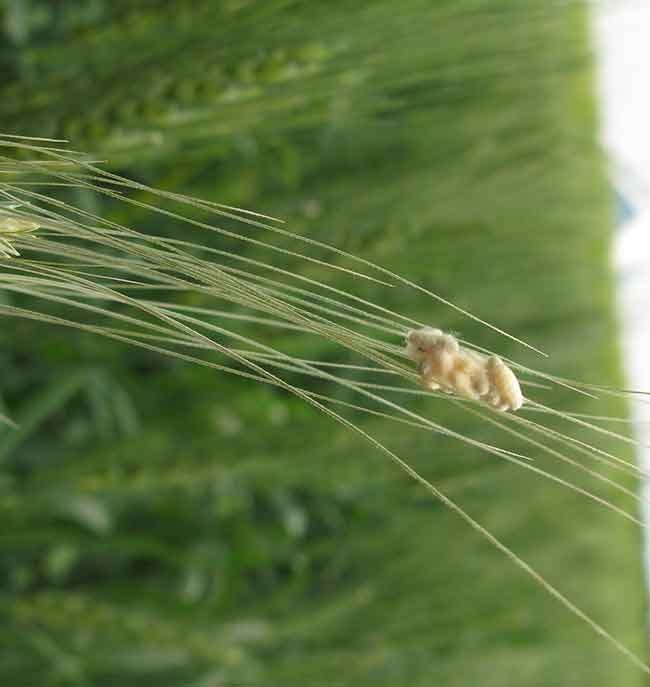 Clusters of pupal cases of Cotesia became noticeable on the head of cereal crops. An early and dry spring hindered crop growth and gave a leg up to early season insects like cutworms