Recapping some of the most problematic insect pests in 2021, and looking ahead to the coming season. 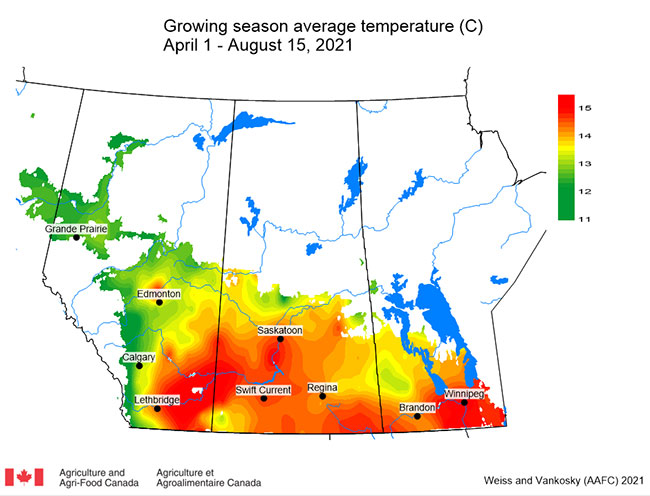 The first insect to talk about is grasshoppers. There was heavy localized pressure across the Prairies with many accounts of spraying and shortage of some control products. There are different species with different host preferences, and their presence in the crop may not necessarily mean trouble, and understanding the differences is important.

The Migratory grasshopper prefers forbs, grasses, wheat, barley and other crops, but during outbreaks, will eat almost anything, including the bark of small trees. In outbreaks, at high densities they have ‘gregarious’ behavior, similar to locust behavior, and migrate in large groups. The nymphs are capable of moving up to 16 kilometers per day, and 1000 km swarms have been reported from South Dakota to Saskatchewan.

The next one is Packard’s grasshopper. Less of an issue in 2021, but can outbreak and cause local damage. They prefer open habitat, and prefer legumes, but will also feed on vegetables and small grains.

The Two-Striped grasshopper was prevalent in most of Saskatchewan and Manitoba, and into Alberta as well. It prefers lush foliage and heavier textured soils, and will feed on weed species in sloughs and ditches. It is a pest of alfalfa, but will also feed on other crops including cereals.

The Clear-winged grasshopper is primarily a grass feeder. In 2021, there were very heavy populations in southeast Saskatchewan on pasture. There was a neighbouring lentil field across from the field with no damage, but a neighbouring wheat field was being converted to sticks. There was similar experience in Manitoba where there was no damage to canola across from a heavily infested pasture. So these grasshoppers are more host-specific.

In most crops, the threshold for large nymphs and adult grasshoppers is 10 to 12 per square metre. Lentil and flax in boll are more sensitive and the threshold is two/m2.

The 2021 Grasshopper survey for Prairies provides some predictive power for 2022. There were some large populations, in some areas, but infestations could have been a lot worse.

Spring temperature is also important for grasshopper development. Agriculture and Agri-Food Canada monitors the accumulation of temperature, and the longer the grasshoppers have to develop, the more time they have to lay eggs for next year’s population. The maps are posted on the Prairie Pest Monitoring Network website at www.PrairiePest.ca. By Aug. 15, 2021, the maps showed that there was a lot of heat accumulation that would allow grasshopper development and egg laying.

Some grasshopper species like hot temperatures. Clearwing has maximum egg production at 32 to 37 C, and adults appear earlier than other species. Migratory grasshoppers have an upper temperature threshold for feeding around 45 C. The two-striped grasshopper will bask in the sun to maintain a body temperature between 32 C and 38 C throughout the day.

For 2022, the potential for outbreak is dependent on the infestations from 2021. Conditions in 2021 were favourable for egg laying. In the spring of 2022, an earlier hatch with warmer, dryer conditions will allow more rapid development of grasshoppers. There needs to be some spring moisture to green-up foliage so juveniles have something to feed on early in the season.

There are also non-pest grasshoppers. There are 85 species of grasshoppers on the Prairies, and four to five are typically pests. If a grasshopper has wings before late June, it is not one of these species. An example seen throughout southern Saskatchewan in 2021 is the Speckle-winged rangeland grasshopper. Another conspicuous grasshopper that is active in late summer as adults but rarely causes issues is the Carolina grasshopper.

Wheat midge
Wheat midge populations were relatively low across the Prairies in 2021, very likely because of low rainfall. The 2022 forecast for Saskatchewan shows a big decrease from 2021. They overwinter as larvae, typically in the soil. They need more than 25 mm of rain prior to the end of May to complete development to adults. 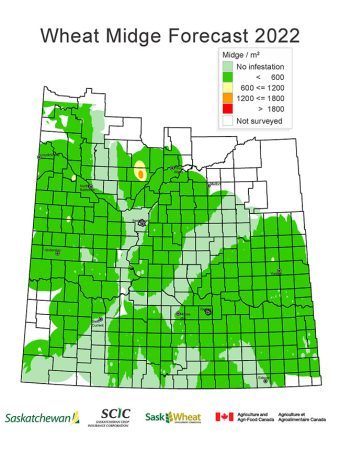 ABOVE: A 2022 forecast map for wheat midge. Courtesy of James Tansey.

Insecticide products registered for control are Group 1B active ingredients dimethoate(Lagon/Cygon) and chlorpyrifos (Lorsban). Use of chlorypyrifos products will no longer be allowed at the end of 2023. Varietal blends of wheat are a very good way to control the wheat midge.

Macroglenes penetrans is an important parasitoid and can have an impact on populations as well.

Barley thrips
There were several reports of barley thrips in barley and occasionally durum in late June and early July in the south and east part of Saskatchewan in the Regina, Weyburn and Tisdale regions. Some required control with dimethoate insecticide. The threshold for barley is seven to eight per stem, and scouting should happen relatively early as the stem elongates. Economic effects can occur in other grass crops but are less consistent.

Bertha armyworm have cyclical outbreaks of approximately six to eight years, with population reductions primarily driven by baculoviruses and entomopathogenic fungi pathogens. There was a minor outbreak in 2015-2016, so there could be an outbreak, at least regionally, coming soon. 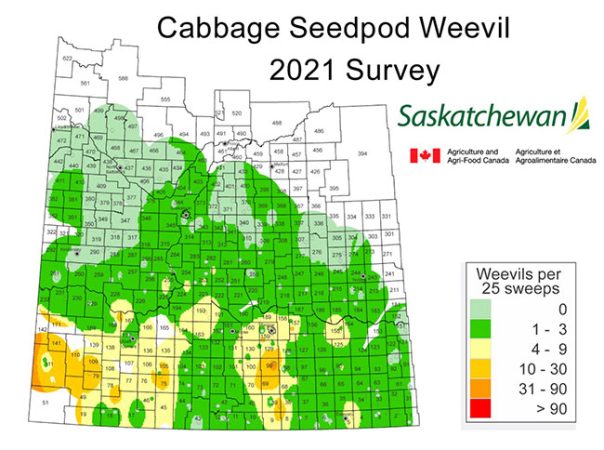 ABOVE: Cabbage seedpod weevil is an invasive insect pest. Courtesy of James Tansey.

Diamondback moth
Diamondback moth is monitored with pheromone bait lures. Low numbers were captured in Alberta and Saskatchewan with no reports of spraying. In Manitoba, numbers were relatively low, but some insecticide applications in the Eastern, Central and Interlake regions occurred.

They move  up from southern latitudes, and once diamondback moth arrive, temperature is very important for development. It is possible for five generations to develop, but four generations is more typical.

Cutworms
Cutworms caused relatively widespread problems throughout the Prairies. Redbacked cutworms were found in central Alberta, and the Pale Western cutworm in the MD of Smoky River, with some reports of serious damage in canola late May to mid-June in central Alberta.

Sporadic reports of redbacked cutworms in central regions of Saskatchewan occurred in canola, with some reports of damage to faba bean and lentil.

In Manitoba, insecticide application and some reseeding were reported in canola in the northwest. Some cutworm damage was also reported in oats in the southwest.

Pale western and redbacked like dry conditions. Uncultivated fields with broadleaf weeds in August and September can attract egg-laying females.

Flea beetle
Flea beetle were a large issue on the Prairies in 2021. Striped flea beetles are dominant in northern regions and populations are apparently moving south. Crucifer flea beetles are still predominant in the south but there is an apparent shift in prevalence of these species occurring. Regional prevalence and some of the factors that contribute to this is being researched in Western Canada.

Flea beetles were a major concern in canola throughout Alberta, and some control measures were used at late pod stage in the Peace. In Saskatchewan, there was widespread, serious damage in the northeast, and a lot of spraying and reseeding in 2021. Fall populations of the crucifer flea beetle were high in Swift Current, Regina and Outlook areas. Manitoba had several reports of multiple foliar insecticide applications for flea beetles. Ten to 15 per cent of canola acres in eastern Manitoba were reseeded.

Lygus is a complex of several species, with over 300 host plants, including canola and faba beans. They are piercing, sucking feeders.

Adults emerge from plant litter after snow melt. After mating, females seek budding alfalfa or canola. The first nymphs appear the end of May. Lygus bug likes hot temperatures, with greatest egg production above 30 C. High relative humidity favours their development, but rainfall can be hard on the young nymphs and wash them off the plants. Parasitoids in the genusPeristenus are natural enemies.

The current nominal threshold in canola is two to three lygus bugs per sweep at late flower to early pod stages.

In faba bean, flowering to mid-pod stage is the most vulnerable. Lygus bug feeding can cause discolouration of the seed coat, hull perforations or seed pitting. No threshold has been established but the suggested recommendation is no action required at two per sweep. The best time to control is likely at early pod. 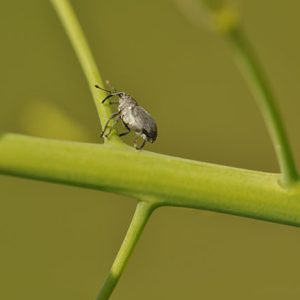 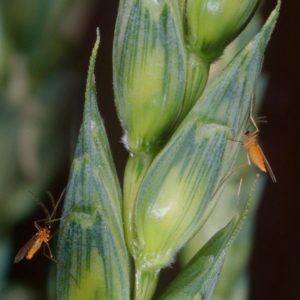 RIGHT: Low rainfall across the Prairies likely contributed to low populations of wheat midge in 2021. Photo courtesy of AGRICULTURE AND AGRI-FOOD CANADA.

Red bug
In Saskatchewan, the “red bug” – Peritrechus convivus (no official common name yet) – has been reported. It is a piercing, sucking feeder, and the name of the family is the dirt-coloured seed bugs. They are very active and juveniles feed on seedlings of several crops. Adults can feed on canola (and other crop) seed underground and there is some evidence for a preference of adults for lentil seed.

Some damage was seen, particularly in flax, where there were literally large bare patches in the field. Sometimes their damage is mistaken for cutworm issues.

Pea leaf weevil
Surveys are conducted across most of Saskatchewan. The range continues to expand, and is now in low numbers Manitoba. Numbers were low in 2021, but an increase in the northeast of Saskatchewan was seen.  Foliar insecticides are not recommended as results have been mixed in past tests.

Pea aphid
Pea aphid is a pest in pea, faba bean and lentil. There were relatively low populations across the Prairies in 2021 with few reports of spraying. Populations blow up from the United States.

Scout peas when 50 to 75 per cent of the plants are in flower. The threshold is when there are two to three aphids per eight-inch plant tip, or nine to 12 aphids per sweep, at flowering. Apply an insecticide when 50 per cent of plants have some young pods.

The threshold for lentils is 30 to 40 pea aphids per sweep. In faba bean, economic thresholds look like 103 to 164 aphids per main branch.

Pea aphid does not like hot weather. Research shows that at 27 C, there is nine per cent survival of juveniles.