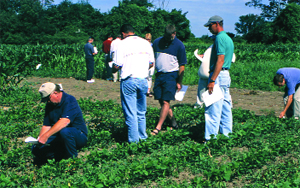 The word ‘change’ has become a significant part of the agricultural jargon, from the hybrids and varieties growers select to the technology used to plant and harvest. Now, the manner in which growers can access information is changing, with a secondary facet that favours smaller, more interactive gatherings.

More growers are favouring the smaller, more interactive approach to sharing information and resources, a move that can also help define individual strengths and weaknesses.

Late in 2006, ACC Farmers’ Financial and Strive, a Guelph based company that offers guidance in building leadership, partnered and organized a series of discussions among growers. The groups accessed $32,000 from the federal Agricultural Management Institute (AMI) to help in hosting the discussions and posed two key questions to growers: How do you get your information? and What is the most effective way of receiving it?

During the discussions, it was determined that a significant portion of the more progressive growers in Ontario are retrieving much of their information from the internet. That trend is an increasingly popular method among growers, especially given the amount and intense nature of agricultural research being conducted in Canada and the US. Another group of these growers favoured learning and sharing in smaller groups, another recent trend that has been developing, according to various crop advisors and extension personnel.

“It was really interesting because the lecture style has become a bit passe and maybe because the internet has taken over,” says Ralph Kikkert, one of the partners at Strive. The two groups of growers have their own definite ideas of where to go for information and how to present it. Yet the common theme throughout the discussions was that information has to be accessible to all. “They all say, ‘We need to have a one stop shop where we can get information for the agriculture industry’ and it has to be done with one voice.”

Of particular concern was the lack of user-friendliness for some internet sites and the fact that some people simply prefer the option of speaking to another person. “Not everybody’s going to go to the internet, and the internet doesn’t always give people the answers they want,” explains Kikkert.

The notion of discussing and sharing in smaller, more interactive groups is also gaining in popularity. Kikkert notes there are more growers who are joining together with other like-minded colleagues to scout each other’s fields, compare weed or disease challenges and share information that can help everyone in that group. The benefit with this approach is that strengths and weaknesses of each member of the group can be recognized and perhaps further developed.

“That’s the premise of the group saying, ‘We can get potential synergies coming out of this as well, in addition to just gathering more knowledge and information’,” says Kikkert, who acknowledges the ‘strength in numbers’ approach is gaining popularity, even on a small scale. Growers are relying more on crop advisors, company representatives and service providers, and this trend follows along the same line. “To be totally independent today is very difficult.”

Webinars bringing people closer
Another option in the race to bring information to individuals and small groups is the development of web classrooms or webinars. Although its uptake has been slow, the potential is there to distill the term ‘Learning at a Distance’ to just ‘Learning’. In 2006, the Ontario Agricultural Training Institute received funding from AMI to deliver a set of four courses via a two-way, voice-interactive system. The program was made available using high speed and dial-up but had no video interaction. Given the wide array of technologies available on farms throughout the province, it was decided a video component would be too complicated.

The four courses included an introduction to commodity marketing, an intermediate and advanced marketing session, a human resources course for managing for high performance and an introduction to farm succession planning. The programs were to be delivered during a five to six week period in January and February 2006.

The benefits of this type of delivery of information is clear: it is cost effective, it minimizes unnecessary travel and provides a consistency to training resources. This type of training program would be of particular interest to growers in eastern and northwestern Ontario. Of particular interest to everyone is the cost savings. Corporations in the US have embraced this new format for holding meetings and training seminars. In 2005, it was stated that IBM saves between $24 and $36 million annually using this technology.