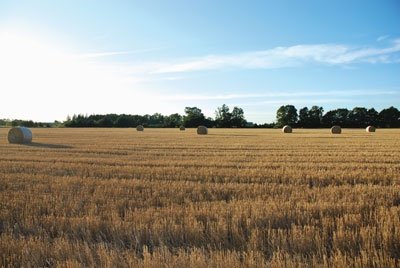 Whenever a favourable growing season takes shape, growers can become a little more creative. In 2010, the excellent growing conditions sparked renewed interest in double-cropping soybeans after winter wheat, something that is not likely being considered in 2011. However, in 2010, with the potential of an early harvest looming, some farmers were weighing the options of returning to the wheat fields to plant soybeans.

Double-cropping soybeans in Ontario is viewed by many as a gamble, comparable to betting on a long shot. Several weather-dependent factors have to work to the farmers’ benefit: the wheat must be harvested early, adequate soil moisture is critical, and a warm fall is required to extend the growing season.

While these factors seem to heavily stack the odds against producing a feasible crop, careful management by some producers is improving their chances. Eric Richter, territory manager for Syngenta Seeds and a certified crop advisor, prefers to describe double-cropping as a calculated risk, rather than a long shot. Richter experimented with the idea 10 years ago with the help of four farmers in northwestern Middlesex County in Ontario. Noting that double-cropping still carries some risk, Richter says three dates in July – the 10th, 15th and 20th –can help farmers determine whether they should take a chance on planting soybeans after the winter wheat harvest. “It’s very much a calculated gamble. If you can be on the earlier side of the 10th, it’s not a gamble: the odds are 75 to 80 percent in your favour of a feasible, profitable crop,” says Richter. “Once you pass the 15th, the odds drop, in my opinion, to 50 percent and they go against you 10 percent a day to July 20.”

If planting after the 20th, Richter says the chances of success are quite slim, adding that farmers should be resigned to the fact that they are planting a green manure crop by that time.

There may be interest, but not always support
Horst Bohner, soybean crop specialist for the Ontario Ministry of Agriculture, Food and Rural Affairs, is not convinced that double-cropping soybeans is worth the risk. “You are really shooting for yields of around 25 bushels per acre, so the economics in Ontario become pretty thin,” says Bohner. “It has certainly been tried before, and so far, I would say the success rate has been 50-50.”

In other words, Bohner says farmers have a 50 percent chance at growing a crop of 20 to 30 bushels per acre, if planting on July 1 in southwestern Ontario. “A quick rule of thumb is that you lose about one bushel per acre per day yield potential after July 1,” adds Bohner.

If farmers are fortunate enough to harvest their winter wheat early, the next critical requirement for a decent double-crop of soybeans is adequate soil moisture. “The soybean seed is a great big seed so it takes a fair chunk of moisture in order to get it germinated,” says Robert Moloney, sales and agronomy support for Syngenta Seeds. “In a perfect world, you’ve planted an inch and a quarter deep, and it gets rain within a day and it will all come up.”

For Moloney, receiving rain shortly after planting is paramount. With Ontario’s relatively hot and dry weather in July, Moloney suggests that there is inadequate moisture at one-inch deep. If farmers have to plant deeper to find moisture, he notes they run the risk of extending the time needed for the crop to emerge. “You have to get lucky with rainfall. To me that is the most critical thing in terms of actually getting something out of it, and to get the crop up and out of the ground,” says Moloney. “Then you have to hope that you don’t have an early frost that’s going to take it out at other end of the season.”

The right conditions are imperative
The combination of an early harvest and timely rainfall lined up well in 2010 for Ian Matheson, a hog producer in Oxford County. It should be noted that Matheson double-crops soybeans after winter barley, allowing for an earlier harvest than winter wheat. Using a seeding rate of 300,000 per acre, Matheson’s soybeans were planted by July 9. They were harvested on Nov. 1 and 2, yielding 42 bushels per acre and 14 to 15 percent moisture. “We just had the ideal conditions: lots of heat and moisture at the right time to keep them coming along,” says Matheson. “We had rain two days after they were planted, and they were up in five or six days after they were in the ground.”

Matheson has enjoyed good success with double-cropping, noting that he has had only one failure since 2002. He says they lost one of their best-looking soybean crops two years ago because wet weather in late fall scuttled the harvest.

Another benefit
Although Matheson admits double-cropping is a gamble, he says the risk of not harvesting anything is reduced by a nitrogen credit resulting from the plowed down soybean crop. “The corn crop that goes into that field the next year usually ends up being our best corn. There’s a lot of residual nitrogen.”

Exactly how much is uncertain. But Matheson’s crop consultant, Wayne Currah of Trillium Agronomics in Hickson, Ontario, north of Woodstock, estimates the nitrogen credit at 20 pounds. Currah says it is also important to note that there is going to be a residual amount in Matheson’s fields from the hog manure from 2008 as well as from the 90 pounds of nitrogen that was applied to the winter barley.

The views on the potential nitrogen credit are mixed. Echoing Matheson’s comments, Richter believes the return is significant, creating the equivalent of 70 to 80 units of nitrogen. “They have far more than what you what you would give credit for a corn crop following a soybean crop that has been harvested, because the double crop is knee high or higher and it’s got all those pods with immature beans in them,” says Richter.

Bohner and Moloney are more skeptical. Noting that there are not a lot of data available in Ontario, Bohner estimates that a nitrogen credit from the double-crop soybeans would be similar to a normal soybean crop, which is about 30 pounds. “The reason it’s not a whole lot more is because the yield potential is lower for double-cropped soybeans and much of the N credit actually comes from a lack of corn residue and not from stored N,” says Bohner.

Sounding a cautionary note, Moloney also is not as excited by the prospect of plowing down a soybean crop for a nitrogen credit. “We do give soybeans a little bit of a nitrogen credit into a corn crop but it’s almost a negative credit; soybeans don’t leave a lot of the nitrogen they fix behind. But since there isn’t much residue they don’t tie up much of the soil’s residual nitrogen. This leaves more of this soil residual nitrogen available for the corn crop,” reasons Moloney. “If you leave the wheat straw in the field, I would not give any N credit to the corn crop the following year simply because whatever nitrogen the soil is making available will be temporarily tied up breaking down the straw. Most guys probably aren’t going to give their soybeans a credit anyway, so I think it’s a wash. I do believe there is a credit there on all soybeans. It’s just that most growers don’t do it.”

Additional factors to remember
Growers contemplating a double-crop have several other factors to consider. Crop insurance is not available. There is also the risk of increasing disease or soybean cyst nematode pressure by planting an extra crop of soybeans in the rotation.

In response to growers’ questions in the past, OMAFRA has offered a few guidelines, prefaced with reservations about the potential success of double-cropping soybeans.

After harvesting wheat as early as possible, OMAFRA says the chaff and straw should be spread evenly. An eight- to 12-inch stubble height is preferable to ensure stem elongation for higher bottom pod height without impeding early growth. Weeds should be controlled in the wheat, either before planting or before the emergence of soybeans. A herbicide program should also be planned around volunteer wheat.

The soybeans should be planted in narrow rows with seeding rates of 250,000 seeds per acre in 7.5-inch rows.

Richter says farmers should also keep the harvest season in perspective. Given the narrow window of opportunity, he suggests that farmers should plant a practical acreage and be prepared to switch from corn harvesting, if necessary. “It’s a late-October to November harvest, so no producer should do more than they can harvest in one to two days,” says Richter.

Given the questions from growers about double-cropping over the years, Richter says he is surprised more have not experimented with the idea. He cites the lack of crop insurance and the fact that farming is risky enough without trying something that may only have a 50 percent success rate as a couple of reasons why more have not tried it.

But Richter says farmers like Ian Matheson are finding ways to make double-cropping work in their favour. And much like veteran gamblers, they also know when not to push their luck.
“They’re experienced enough now that they look at the calendar and if the wheat came off on the 18th of July, they don’t go running for the drill,” says Richter.