Research identifies the most profitable inputs. 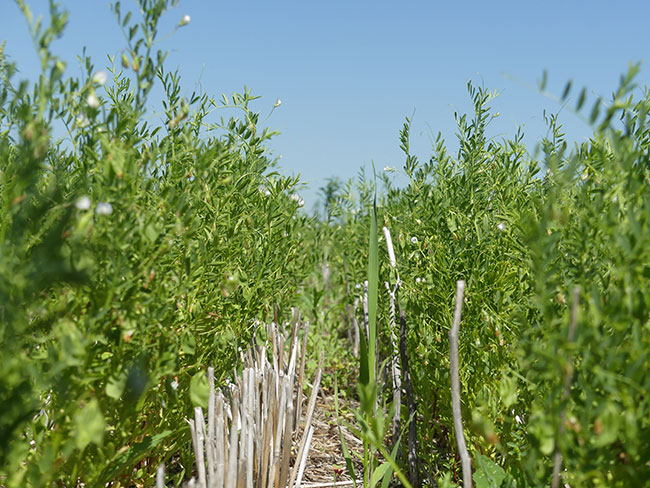 A combination of a residual pre-seed herbicide, 190 seeds/m2 seeding rate, and no fungicide in dry years produced the highest net return. Photo by Bruce Barker.

Integrated management strategies that establish a competitive crop are the foundation of optimal yield and profitability. These include good weed control, adequate stand establishment and fungicide application when necessary.

“A major limiting factor for lentil production continues to be weed control. An effective integrated weed management practice that has been found to reduce crop-weed competition is combining herbicide applications with higher seeding rates,” says Jessica Weber of the Western Applied Research Corporation in Scott, Sask.

The research was conducted throughout Saskatchewan from 2017 to 2019 at locations in Scott, with the Western Applied Research Corporation; Indian Head, with Indian Head Agriculture Research Foundation; Outlook, with Irrigation Crop Diversification Corporation and Swift Current, with Wheatland Conservation Area. The study was also conducted at the East Central Research Foundation in Yorkton in 2017, then in 2018 and 2019 at the University of Saskatchewan in Saskatoon.

The herbicide management treatments compared a pre-seed burnoff of glyphosate to a pre-seed residual with a tank-mix of Focus and glyphosate. The herbicide applications were applied three-to-five days prior to seeding.

Three seeding rates of 130, 190 and 260 seeds per square metre (seeds/m2), or 13, 19 and 26 seeds per square foot, were compared. The current seeding rate recommended by Saskatchewan Pulse Growers is 130 seeds/m2. CDC Maxim small red lentil was used in the study. This lentil variety is high yielding with good resistance to ascochyta blight and anthracnose.

All plots were direct-seeded into cereal stubble and all fertilizer was side-banded during seeding.

“Overall, it was critical to determine which integrated agronomic practices will result in the greatest productivity while remaining profitable, and if certain combinations of inputs may provide a synergistic effect to improve lentil productivity,” Weber says.

Although the residual herbicide combined with a 190 seeds/m2 seeding reduced weed biomass by 76 per cent, it ultimately had little effect on overall yields. Weber explains this is likely due to the relatively low weed densities that persisted throughout most of the locations, along with the relatively good control observed with pre-seed glyphosate and in-crop herbicides. Under weedy conditions, a yield response to residual herbicide application would be more likely to occur, especially if Group 2 or glyphosate resistance is an issue, she says. 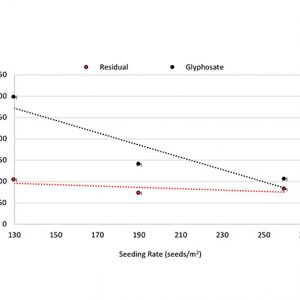 Effect of seeding rate and herbicide applications on weed biomass at physiological maturity. 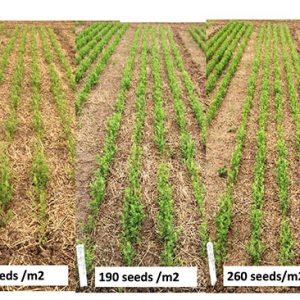 Weber explains that an important factor to consider is that CDC Maxim has good resistance to ascochyta blight and anthracnose. The combination of drought conditions in the study and relatively strong genetic disease resistance may have limited the impact of fungicide applications. High moisture, heavier soil and tight lentil rotations can increase the disease risk.

The most profitable choice is . . .
An economic analysis was conducted to determine which management strategy was the most economically feasible. On average across all treatments, the highest net return of $361 per acre ($891 per hectare) occurred with the seeding rate of 190 seeds/m2 compared to $342/ac ($845/ha) for the 130-seeds rate and $345/ac ($853) for the 260-seeds rate.

When looking at the three treatments together, the overall highest net returns occurred with a seeding rate of 190 seeds/m2, unsprayed fungicide and a residual herbicide application for a net return of $386/ac ($954/ha). The lack of a fungicide benefit wasn’t surprising since many of the site-years generally experienced drought conditions with limited disease pressure.

“While a fungicide application typically reduced net returns compared to the unsprayed, fungicides should be viewed as a form of insurance rather than an input cost, as disease management is essential for proper lentil production, especially in higher risk areas,” Weber says.