Clubroot, a slime mould disease, is now a western Canadian problem, according to front-line workers who’ve been battling the outbreak that was first observed in the Edmonton area in 2003. Since then, it has spread to more than 20 counties in central and southern Alberta.

Clubroot was confirmed for the first time in Saskatchewan in November 2011, in two canola field research plots.

A Manitoba Clubroot Action Team, representing the province, federal government and Canola Council of Canada (CCC), was organized in early 2012 in a proactive attempt to prevent or stop the spread of clubroot disease into the Keystone province. Yet testing has confirmed that clubroot DNA appeared in soil samples taken from six separate fields last year.

Seed growers and potato producers should be particularly alert. The disease can arrive on soil from infected fields, starting small and going unnoticed. While it doesn’t hurt potato production, it can knock half the yield out of a canola crop – and it is likely to stay in the soil for many years.

According to plant pathologists and crop specialists, no control measures can remove the  clubroot pathogen once a field is infested. The good news is that clubroot-resistant canola varieties have been developed by breeders working for several seed companies. Planting these varieties, along with long rotations, may help reduce yield losses.

Clubroot is a soil-borne disease that causes galls to form on the roots of canola and most other members of the cabbage family, potentially causing premature death and dramatic yield losses. According to the Manitoba Clubroot Action Team, clubroot resting spores are very long lived. It may require 15 to 20 years between susceptible crops in order to reduce an infestation to a point below detectable levels.

Keep it clean
To maintain a clubroot-free status in non-infested areas, agronomists and pathologists are advising growers to prepare to take proactive steps to prevent an accidental introduction. Efforts have focused on comprehensive cleaning and disinfection (sanitation) practices for equipment leaving clubroot-infested fields.

University of Alberta research published in 2011 indicates that clubroot resting spores can contaminate and move with seeds harvested from infested fields. Contaminating spores have been found on the seed surface of canola, potatoes, peas and even wheat.

Preliminary research has shown that some canola seed treatments can reduce resting spore viability, but further studies are needed to develop specific recommendations.

To minimize clubroot introduction to fields via contaminated seed, the action team recommends:

Understand clubroot
The slime mould organism is not a true fungus, says Ron Howard, plant pathologist with Alberta Agriculture and Rural Development in Brooks. “Clubroot is in a special class of organisms called protists, which  have characteristics of fungi and primitive animals. Some types of protist can cause plant infections similar to a lot of fungi, but it also has a swimming zoospore stage similar to protozoa.”

The clubroot organism lives most of its life in soil, or in plant roots growing in the soil. As infected roots decay, resting spores are released. At that stage, they can be moved around on tillage equipment, seeding and harvesting machinery, vehicles, and many other kinds of equipment working in infested  fields.

“A soil-laden piece of farm machinery, construction equipment or recreational vehicle in the Edmonton area could be loaded on a flat deck trailer and be in southern Alberta or southwest Saskatchewan the next day,” says Howard. “Spores also spread with soil erosion caused by water or wind. Harvesting operations can kick up soil containing spores.

Contaminated vehicles and equipment can carry them to another field. Even wildlife and human foot traffic could move infested soil.”

Prevention
The pathologist recommends a three-step process for the sanitation of machinery, equipment and vehicles. A publication about sanitation procedures is also available from the CCC (www.clubroot.ca).

First, rapid cleaning. Before a piece of equipment leaves a field, move it onto a grassed area. Physically remove as much soil and crop debris as possible by using scraping tools, even hammers, to break clods free. Compressed air can remove loose soil and dust. Plan to take an hour or more to do a good job on a 40-foot cultivator with a light to moderate soil load. Rapid cleaning can take longer for heavily soiled equipment and for larger machines, air seeders, double disk units and multi-wheeled tractors.

Second, pressure wash. Remove the last visible soil (and crop residues). A mobile pressure washer is the best tool for the job, but be sure to follow manufacturer’s recommendations when using pressure washing equipment on and around electronic gear.

Third, disinfect. To really kill the last spores, wet down the equipment surfaces with a household bleach solution. “Put your one percent household bleach in a hand pump or backpack sprayer and keep the surfaces continuously wet for at least 20 minutes, ideally 30 minutes, for maximum effectiveness,” says Howard.

For custom applicators, the best practice is to always arrive at a field with a clean piece of equipment – whatever it takes.

However, Howard makes some allowance for discretion or judgment. “Cleaning depends on the nature of your activities and your confidence in whether you’re working in fields that have or don’t have a clubroot infestation,” he says. “I’d be cleaning my equipment after I left a field in any county where a high proportion of fields have clubroot. On the other hand, if a producer has clubroot in every one of their fields, they could choose to clean equipment only before leaving the farm.”

“Finding the DNA in the soil proves there is some potential for this disease here,” says Holly Derksen, provincial field crop pathologist. “We want to be prepared, so it’s important that growers do something to manage it and prevent it from moving in. Growers should at least take time to clean excess dirt from their equipment before leaving the field, and where DNA was discovered in their soil, growers probably want to step up their sanitation.”

Managing clubroot
John Mayko, senior agri-coach with Agri-Trend Agrology and former CCC agronomist, has been farming near the original outbreak area in Alberta from the beginning. “Clubroot was first found just over an hour from my farm,” he says. “It takes several years to build up, so it wasn’t new. When they found it in 2003, that field was nearly decimated by it.”

Clubroot has not spread onto Mayko’s farm, but it is present in his municipality. “I make sure that I’m cleaning off any soil from my equipment that comes from another area,” he notes.

If you suspect contaminated soil has arrived in a clean field, two actions can slow the rate of spread. “Number 1, make sure you don’t have a short rotation, like canola every two years. That will really crank up the disease spread in a field,” says Mayko. “Second, in areas where the disease is present, make sure you use a clubroot-resistant canola. Varieties out now have a pretty good degree of tolerance.” 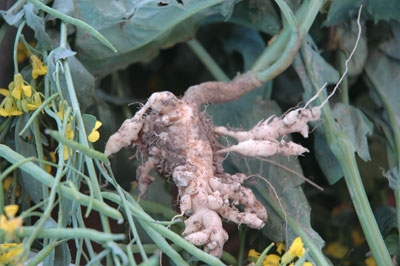 Clubroot is a soil-borne disease that causes galls to form on the roots of canola. Clubroot