The fertilizer industry strongly promotes the 4R’s of Nutrient Stewardship – right source, right rate, right time and right place. Split application of nitrogen (N) fertilizer into two or three applications over the growing season is being promoted as a way to synchronize N application with the crop’s ability to utilize N and therefore increase fertilizer use efficiency. But does it work under Prairie conditions?

There are suggestions that split-applying N fertilizer is a way to avoid volatilization, leaching and denitrification losses. The thinking is that when all N is applied at a single application at or before seeding in spring, then much of the N is vulnerable to loss in late May and June before a crop is taking up much of the N fertilizer, leaving a window for potential loss. For this reason, some agronomists suggest postponing application of a portion of the N until the crop is better able to utilize the N and crops will take up the N more effectively. However, use critical thinking to decide if applying in-crop N is potentially beneficial for you.

For cereal and oilseed crops, many farmers in Western Canada either band their N before seeding or place all fertilizer N in a side- or mid-row band at the time of planting. After seeding, most of the N fertilizer will slowly convert to nitrate nitrogen (NO3-), the form of N that plants take up. As long as N losses from leaching and/or denitrification are minimal, efficiency of N uptake should be in the range of 60 to 70 per cent, which is very good.

It is very true that N fertilizer can be vulnerable to loss, depending on soil type and climatic conditions. For example, if you direct seed a wheat or canola field on May 15 and all N fertilizer is applied at planting, and if the soil is warm and moist, most of the applied N will convert to NO3- by early June. Then, if heavy precipitation occurs during the second and third week of June, NO3- leaching losses can be significant in sandy soils, and denitrification can be significant in medium and fine textured soils. This N loss often results in substantial yield loss.

In-crop broadcast application of urea (46-0-0):
Often soil and air temperatures are warm in mid to late June and hot in July, resulting in favourable conditions for N volatilization of broadcast urea. N losses could easily be in the range of 20 to 40 per cent. Coating the urea with a product such as Agrotain (urease inhibitor) or another slow N release product should reduce N volatilization loss. After N application, a 10 to 15 mm rain is needed to move the urea into the soil. Then, it will take two to three weeks for soil microbes to convert the majority of the urea to NO3- for plant uptake. The delay from the time of N fertilizer application, having rain to move the N into the soil, then to convert urea to NO3-, could be three to four weeks or more. By this time, it may be too late for the N fertilizer to be beneficial to wheat, but the canola field may benefit if the crop is still branching and flowering.

In-crop application of liquid 28-0-0:
This can be applied by dribble banding or using spray jet nozzles. Remember that 50 per cent of the N in 28-0-0 is in urea form and subject to volatilization, so a urease inhibitor should be used to minimize volatilization losses when applied in warm June conditions. One-quarter of the N in 28-0-0 is in plant available NO3 form when precipitation moves the fertilizer into the soil.

For both in-crop broadcast 46-0-0 and in-crop application of 28-0-0, the very best efficiency of uptake would be 35 to 40 per cent, and would occur if precipitation moved the fertilizer into the soil within a day or two after application and the product was applied in mid to late June. This means that if 30 lb N/ac was applied and efficiency of uptake was 40 per cent, only 12 lb N/ac would actually be taken up by the crop, in the best-case scenario.

Fertigation of liquid 28-0-0:
Application through a pivot system is a reasonably good option for irrigation farmers. Some volatilization of the urea in the 28-0-0 will occur on warm, windy days. Remember that after fertigation of 20 lb N/ac, a quarter of the N will be immediately available to the crop, but the remaining N will take two to three weeks to become available for crop uptake. Therefore, fertigation application must take place about two to three weeks before the crop will need the N fertilizer.

Foliar application of 28-0-0:
Maximum application rate using spray nozzles is about 20 lb N/ac to avoid leaf burn. Generally, less than five per cent of the applied N is taken up via the leaves in a best-case scenario, which means less than one lb of N/ac of a 20 lb N/ac application would be taken up by the foliage, which is almost insignificant to increase crop yield. The N fertilizer would have to be washed from the leaves by precipitation and moved into the soil, and converted to nitrate for plant uptake. Therefore, this method of application is not normally recommended.

Broadcast application of ammonium nitrate (34-0-0):
This is a very effective in-crop product with very little potential N loss. Half the N in the fertilizer is in the plant available form of NO3, which is immediately available to a crop after rain has moved the fertilizer into the soil. Unfortunately, only a couple of companies import 34-0-0 into Western Canada so availability is generally extremely limited.

For Western Canadian farmers, if leaching or denitrification is not normally a problem, banding all N fertilizer before or at seeding will result in the best uptake efficiency for cereal and oilseed crops. In wetter regions of the Prairies where leaching or denitrification is a more common problem, particularly in June, it may be beneficial to reduce N application in spring by 30 to 40 per cent and apply a second split application about mid-June for availability in early July. Rates of 40 to 50 lb N/ac will be necessary when application efficiency is 40 per cent or less. Although 34-0-0 is the best choice for in-crop use, for most farmers, availability will be restricted to 46-0-0 or 28-0-0. When using either product, keep in mind the best practices to minimize volatilization losses.

In wetter regions with increased concerns of N losses, another option at planting is to use a combination of urea and a slow release N fertilizer in a ratio such as 40:60 to reduce potential N losses. In studies by Alberta Agriculture and Rural Development (AARD) with wheat, barley and canola with urea versus ESN versus a blend of urea: ESN have shown clear benefits using ESN. Additional studies with ESN have also shown benefits with longer-season irrigated potatoes and dry bean. 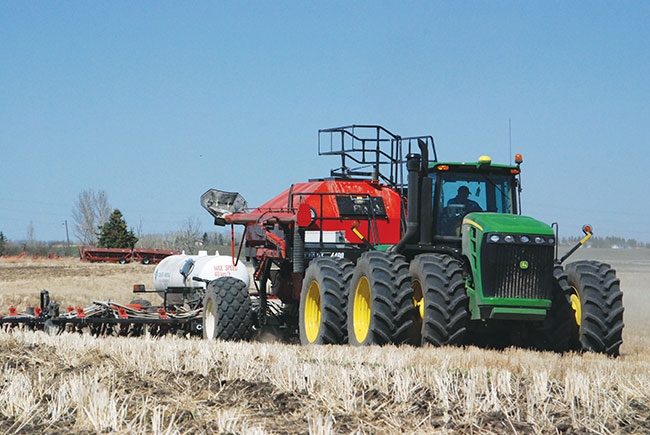