Prairie corn growers had a third in-crop fungicide treatment option on the market in 2013. However, disease wasn’t the issue. Rather, it was plant health and a potential yield boost from a healthier, more vigorous crop.

In 2013, corn prices were close to astronomical. As well, in the new Manitoba-North Dakota corn belt, the record-setting corn crop appeared to be set for a record yield. It appeared that a three-bushel yield boost could fully offset the mid-season fungicide application cost, and be like frosting on the cake if the response was better.

So what happened, and what about 2014 crop recommendations? North Dakota State University (NDSU) and Manitoba Corn Growers Association (MCGA) have both looked at the in-crop fungicide choice for corn. Their general advice to growers is that the treatment may not be worth the investment. But manufacturers (BASF, Bayer and DuPont) say it may be worth considering.

Headline, a BASF product, was registered for corn in 2007. Newer products are Proline, registered by Bayer in 2011 and Acapela, a DuPont product registered in 2013.

NDSU has conducted several years of fungicide research at Carrington and Prosper, North Dakota, with trial applications of Headline after tasseling in corn. According to NDSU extension agronomist Joel Ransom, disease prevention should be the primary reason for a fungicide application. Without the disease, the point of the treatment is questionable.

“We really don’t see the diseases that folks deal with in the south and central corn belts,” says Ransom. “We have stalk rots and root rots, smut and those types of things, but those are not easily controlled by fungicides.”

The proposed rationale for these types of in-crop fungicide treatments in corn, in the absence of disease, Ransom says, is that the leaves stay greener, providing some ability for the plant to minimize other abiotic stresses.

Ransom has compiled data from several North Dakota agronomists. “There’s definitely not a consistent response. Probably less than a fifth of the time in the research conducted in North Dakota can the cost of the application be met with the yield increase obtained. Some years have shown a slightly negative response, too, meaning you are not guaranteed to get a profitable response to a fungicide on corn in North Dakota,” he says.

Headline defense
Headline costs about $20 an acre, plus application. In North Dakota, it is widely used against foliar diseases and is considered pretty effective. Robert Hornford, BASF senior technical service specialist for the eastern Prairie region, says whether or not a farmer uses this in-crop fungicide depends on what disease he’s trying to control.

“Is it within the spectrum of the fungicide, and on what else he is trying to do in terms of overall crop health, yield and harvestability,” says Hornford. “Generally, the better the crop, the better the results.”

If disease is the big issue, check the susceptibility rating for the specific corn varieties in your fields. Without disease pressure, the second decision is about the potential for yield and lodging. If it looks good, has a high yield potential or is prone to lodging, the fungicide treatment may be a good choice. Other factors will include environmental conditions, long-range forecasts and crop rotation history.

“In the absence of disease, these trials found that 51 per cent of the time, there is an average yield increase of four bushels or more,” says Hornford. “Our average yield increase in 2007 was 5.65 bushels. In 2008 our average increase was 6.05 bushels. In 2010 it was 4.38 bushels and in 2011 it was 6.3 bushels,” he says. “Half the time, growers are going to get an extra four bushels when they use Headline. As for whether it’s worth it, they can do the math.”

In the absence of disease, Hornford says, additional yield from a product like Headline comes from improved plant health and improved standability.

Proline presentation
Bayer CropScience directly promotes use of Proline fungicide for corn yield protection. According to Harold Brown, Bayer market development specialist, Proline was first registered for suppression of fusarium in corn, along with diseases like rust. Proline has a unique Group 3 class of chemistry. Like competitors, it is against leaf diseases. Unlike them, it is registered at two rates. The full rate can be used for control of fusarium and stalk rot, applied at silking time. A new lower rate can be applied at the vegetative stage for systemic, long-lasting control of leaf disease and yield protection.

Normally fusarium is not an issue in Prairie corn crops, so a lower rate is suggested for in-crop protection against leaf disease. So what yield increase can be expected?

“You could get a 10 per cent bump of yield expectation,” says Brown. “Do you get it all the time? It depends. We have had three years of field scale trials, and we have seen good yield increases but not all the time. We don’t have consistent disease pressure in Manitoba.”

Bayer recommends scouting for leaf disease ahead of a decision. If conditions favour disease development and a good corn crop is coming along, Bayer recommends using Proline to protect the crop. Proline will also help to prevent lodging due to stalk rot.

“We don’t make specific plant health claims for Proline,” says Brown. “We do know that a healthy crop produces a higher yield, so I like to recommend a grower try Proline and see how it works on part of the farm before doing the whole farm.”

In 2013, DuPont had corn trials on three Manitoba farms and two Saskatchewan farms using Acapela. Growing conditions gave high yields in Manitoba, but low in Saskatchewan. Diseases were not an issue for these trials, but yields were.

“Three trials were over 130 bushels for yields, and in those trials we averaged a 7.1 bushel difference between treated and untreated corn,” says Kloppenburg. “In the two low-yield trials, there was almost no yield difference.

“Acapela has some very interesting plant health benefits, but we haven’t spent a lot of time in that area of research,” he adds. “Researchers see responses at times in the absence of disease pressure. Some physiological effects have been demonstrated and shown in the scientific literature.”

As to the value of a treatment, Kloppenburg advises making a rational decision. Factors to consider for a corn fungicide in-crop treatment include field history as an indicator of potential disease pressure, weather conditions, disease tolerance of the hybrids in the fields and commodity prices. “Put all those into the decision equation as to whether you can expect a return on investment,” he says.

Growers should decide
If there is a potential yield benefit for Manitoba’s corn growers from in-crop fungicide treatments, it is pretty low on the growers’ radar, according to MCGA agronomist Morgan Cott. “I have very few guys asking about it. It’s not a big thing for them,” she says. “We don’t have the disease pressure in Manitoba to peak their interest.”

The MCGA has not conducted any related trials since 2008 or 2009. “As with any new product I would tell them to try a little at a time. Test all the products,” suggests Cott. “You’ve got to know what all the products are doing against each other and against an untreated area. Does it really boost growth compared to your untreated areas?”

Greener leaves and stronger stalks will be encouraging and may point toward improved yield. Another year of testing will still be a good idea. 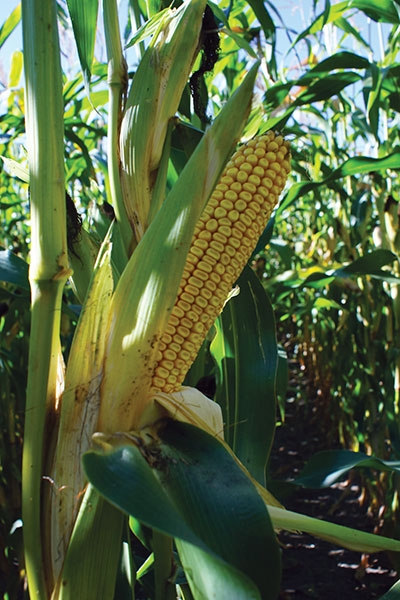