Generally researchers try to stay ahead of farming practices, but lately they find themselves chasing an explanation for an emerging one. 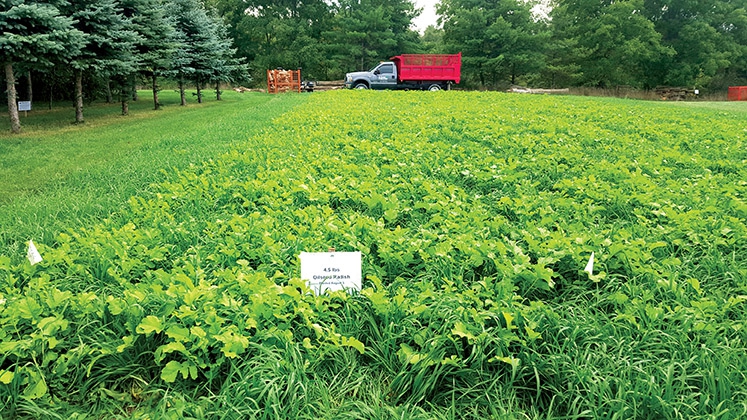 A demonstration plot at this year’s Outdoor Farm Show showcased the potential of oilseed radish in Ontario wheat crops. It’s unknown what the impact of each seeding rate might have been on yield

Dean Baas, a sustainable agriculture extension educator at Michigan State University, started testing oilseed radish’s reported ability to boost yield when interseeded with winter wheat back in 2012. Several farmers from Ohio were claiming low rates of oilseed radish added to their wheat prior to planting produced yield increases, but no one had tested their results without oilseed radish in the same field.

Baas worked with three Michigan farmers – John Burk of Bay City, Dean Kantola of Ravenna, and Henry Miller of Centreville – to plant strips throughout the field of oilseed radish (at a rate of three pounds per acre, or lb/ac) with wheat to compare to wheat planted alone. All of the wheat was planted at the same rate each farmer would usually use on his fields, and results from 2012 and 2013 showed a promising yield increase.

Wheat yield on all three farms increased with oilseed radish, ranging from two bushels per acre (bu/ac) on the Miller farm to 4.9 bu/ac on the Kantola farm. The average increase across all three farms was 3.6 bu/ac and the earlier planted farms (Burk and Kantola) appeared to produce the greatest increase.

Repeating the trial in 2013-2014, Baas looked further into the optimal timing of oilseed radish seeding, and expanded to five locations. Gerald Heck of Monroe, Mich., joined as another farm co-operator. In addition, a small-scale plot was established at the W.K. Kellogg Biological Station in Hickory Corners, Mich., where three different rates (1.5, three and 4.5 pounds of oilseed radish per acre), planted at three different dates, could be tested.

At harvest time, the research station results were mixed, which was thought to be a result of late planting and the harsh winter. Baas repeated the trial again in 2014-2015, including early and late planting dates, and evaluated three different seeding rates at the research station. For the third year in a row, the results on the co-operator farms showed a consistent increase in yield, while the multiple rate trials in the small-scale plots were inconsistent.

“I took everything we had done on small plots, on-farm, and I took the three years’ worth of data, and looked at it all together,” Baas says. “Basically, anything that we had done on a small scale, whether it was all of a small plot, or a small part of a very large plot, you can flip a coin: you get an increase 46 or 48 per cent of the time and you get a decrease the rest of the time. If you look at large scale farmer fields, they get an increase 86 per cent of the time and we have no logical explanation why.”

Baas thinks the best explanation for this irreproducibility comes from variability in the plots that is produced by inconsistencies in the mixture. “If you mix three pounds of oilseed radish with 170 pounds of wheat, you can imagine how little oilseed radish there is in that wheat and I believe that what happened, on a small plot scale, is we couldn’t get it evenly mixed enough,” he says. “So, some of the plots that we thought were at a certain rate were much lower, and some of them were much higher.”

If he’s right, it’s possible half of the plots were under-populated and half the plots were over across the whole length of the plot, basically creating a situation where the lows didn’t show any increase. That would cancel out the highs in areas that did achieve an increase. “And the reason that it worked in the farmer’s field was because even though they weren’t any better at mixing or planting it, we were averaging all that variability by sampling a large enough area.”

To test his explanation – and he is determined to keep working toward an explanation – he’ll be planting the wheat and oilseed radish separately this year using small and large boxes on the seed drill. It’s not a realistic practice for most farmers, but until Baas can reproduce the yield increase resulting in farmers’ fields at a small plot level, he won’t be comfortable recommending the practice. Still, many farmers aren’t even waiting for the results of his current trial.

“Farmers that I’ve been working with have become so convinced, they are kind of working on it as a standard practice,” he says. “That tells you something, so, I still have to believe that this has potential.”

Implications for Ontario growers
Keeping a keen watch for Baas’ future results is Joanna Follings, the Ontario Ministry of Agriculture, Food, and Rural Affairs cereals specialist. She says there aren’t a lot of growers who are adopting the addition of oilseed radish in their winter wheat stands this far north, but some are dabbling with the practice.

To showcase the potential of the practice, she planted a demonstration plot at this year’s Outdoor Farm Show in Woodstock, Ont.
“It’s not what a grower would typically do, because we planted it in August, just so that it would be ready for the show,” she says. “So, the radish was a lot bigger than it normally would be.”

The demonstration did effectively show how much difference was produced by adjusting the oilseed radish rate. Follings says visually the 4.5 lb/ac rate in 1.6 million seeds per acre of wheat seems to dominate a little more than she’d like to see, but since these plots weren’t harvested, it’s difficult to say whether or not that impact would be significant in terms of yield.

That’s why a plot was planted at the Winchester research station on Sept. 30. She says the field crop team is not only looking at different seeding rates in this plot, but also at the impact of the oilseed radish on nitrogen. “Just to see if perhaps you don’t need to put as much nitrogen on when you have the oilseed radish,” she explains.

Whether or not they extend this trial beyond the current year will depend on the results they see at harvest. Follings advises any growers interested in testing the practice on their own farms to include a yield check between wheat that is planted with oilseed radish and wheat planted without it.

“If you can, do a couple strips in different areas having different topography, through the waterhole, that type of thing. That’s what I would try to do,” she says.