Market access, production efficiencies and the long-term ability to feed the world’s growing population: at first glance, those might seem to be three separate topics, but they each have a connection with the carbon footprint of Canadian agriculture. What’s more, they are all factors that have prompted a research project now underway to measure canola’s carbon footprint.

A carbon footprint refers to the total greenhouse gas emissions related to an activity, organization or product. For instance, during crop production, greenhouse gases such as carbon dioxide and nitrous oxide are emitted. The types and amounts of those emissions depend on such factors as crop production practices, crop type and yield, and local climate.

Fortunately, improving production efficiencies is a key way to reduce a product’s carbon footprint. And, thanks to advances through Canadian canola research and the willingness of the country’s growers to adopt those advances, Canadian canola production is becoming increasingly efficient.

“We already know Canadian canola growers are reducing the crop’s carbon footprint, but we need to document it,” says Dr. Vern Baron of Agriculture and Agri-Food Canada (AAFC).

The canola carbon footprinting project, which Baron is leading, will provide that documentation through two complementary studies. One is a country-scale greenhouse gas life-cycle analysis aimed at providing a broad view of canola’s footprint by soil zone and over time. The other is a field assessment of the current footprint at one specific location, to provide a farm-level check of the country-scale analysis.

The other members of the project’s research team are Dr. Neil Harker, Dr. Brian McConkey and Dr. Reynald Lemke, all from AAFC. The project is funded through the Canola/Flax Canadian Agri-Science Cluster, a joint initiative of AAFC and the Canola Council of Canada (CCC).

Why document canola’s footprint?
Cory McArthur, the CCC’s vice-president of market development, outlines three reasons why the CCC supports this project and other recent studies to document Canadian canola’s environmental sustainability, including its carbon footprint.

The first reason is to access new markets. McArthur explains, “Most of our initial work around sustainability and greenhouse gas emissions came up as the European biodiesel market was looking as though it would be short from a feedstock standpoint to meet their biodiesel mandate. The European Union had developed a Renewable Energy Directive, which sets forth certain certification metrics for sustainable products, and it is indexed against fossil fuels. So you need to show certain improvements in greenhouse gas emissions [in comparison to fossil fuels] as well as meeting other economic and social standards in order to export product into that market for the use in biodiesel.”

The second reason is to maintain current markets. He says, “Some of the food companies are looking more and more at sustainability, moving from having a [sustainability] logo on the package to developing a very rigorous sustainability supply certification system. So we need to make sure we’ve got all of our ducks in a row from a canola standpoint to show that we do have very sustainable production practices.”

The third is to “own the information,” says McArthur. “For something like greenhouse gas emission, there are many different ways to calculate it. We’ve found the best way for us to respond to requests from food companies is to have already done that work, so we can sit down with them and say, ‘Here, we’ve already put together the data package on sustainability for canola.’”

He cautions, “Not everybody will simply accept our methodology for calculating greenhouse gas emissions for canola products, but it gives us a starting point. We can assess any differences between our methodology and theirs and address those, but we’ll have 90 percent of the work done, and done according to what we believe is the correct methodology.”

“We also want to, in our own best interests, minimize the effects of agricultural production on global warming because if we can maintain a stable environment, if that is indeed possible, then we should be able to produce crops for a long time.”

He also notes that, with Canada’s canola production nearing 20 million acres, its environmental sustainability is important to the sustainability of Canadian agriculture and to feeding the world’s growing population. “In the coming years the Prairie Region is going to be one of the big food producers in the world. We know we can’t [produce food] without emitting greenhouse gases …. But we have to produce food sustainably. The information we’re getting from this project gives us a benchmark for how well we are doing.”

Comparing canola’s footprint in 1995 and 2010
Life-cycle analysis is a process for evaluating a product’s environmental footprint from “cradle to grave.” In the project’s life-cycle study, the product is canola seed, and the researchers are determining the greenhouse gas emissions involved in its life cycle as far as the farm gate.

“The life-cycle analysis is focusing on whatever happens on the farm, how the canola crop grows and the practices used, and how that affects the environment,” says Baron. Stopping at the farm gate ensures the analysis will provide clear information on the footprint of production practices, no matter how the canola is transported, processed, delivered and disposed of beyond the farm gate.

This study, which will be completed in 2013, involves detailed calculations of emissions. The data on factors that affect emissions, yields and production practices are coming from such sources as research publications, statistical sources and producer surveys. Since most of Canada’s canola production takes place on the Prairies, the study focuses on Prairie practices. As well, because practices and yields differ between the Dark Brown, Black and Gray Wooded soil zones, the researchers are doing a separate life-cycle analysis for each of those zones.

Most importantly, the study is comparing canola’s 1995 and 2010 footprints. “That time period encompasses some huge changes in canola production practices that have resulted in some really fundamental changes in the carbon footprint,” explains Baron.

“On top of that, producers moved from open-pollinated canola varieties to hybrids, which are very high yielding and use the entire growing season.” Yield is a crucial factor because the greenhouse gas emissions are calculated per kilogram of canola seed produced. The length of time the crop is green and carrying out photosynthesis is also important because photosynthesis is essential to storing (or “sequestering”) carbon.

On-farm assessment
The project’s field study is comparing early planting versus late planting of canola and barley, in terms of the effects on crop inputs, greenhouse gas emissions and carbon sequestration.

The researchers selected planting date for the comparison because it’s a decision farmers must make every year and because it influences many other factors that affect a crop’s carbon footprint. For instance, date of planting can affect which canola hybrid is selected and seed yield; the amount of crop residue left in the field, which influences nitrous oxide emissions; and the total time during which photosynthesis can occur, which influences carbon sequestration.

The field study is taking place at Lacombe, which is in a high-input, high-yield canola-growing area. It involves the practices and inputs that a producer would typically use for a high-end canola production situation. The researchers are conducting intensive field measurements of greenhouse gas emissions and carbon storage. In addition they are determining the canola crop’s seed and oil yields, so they will be able to evaluate net emissions per unit of energy produced from the canola oil as well as per unit of seed yield.

Because of the complexities involved in the field methods, 2011 was the first full year of data collection. In that year, the earliest planting date at the field site was May 16 and the latest was June 3. The researchers determined that the early-planted crops had higher yields, lower nitrous oxide emissions and more carbon sequestration.

The researchers will be repeating the field measurements for about two more years to evaluate year-to-year variability.
The two studies are expected to provide the solid, science-based carbon footprint information the canola industry needs.
McArthur is looking forward to those results. “When we get asked about sustainability, whether it’s from NGOs or customers, the response that has the most impact is that Canadian canola growers have adopted sustainable practices not because they are chasing a market and are trying to show they can be sustainable. They have adopted them out of economic and agronomic necessity,” he says.

“To me, that makes our method of sustainable production truly sustainable – the growers are doing it because it makes good sense on their farm, it makes them more money and it sustains their ability to produce a high-quality crop over the long term.” 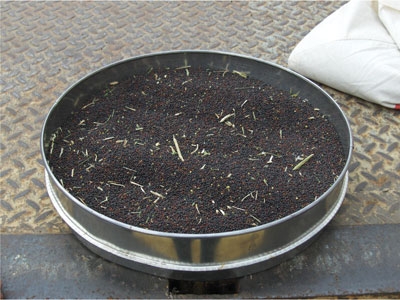 The field study is determining the carbon footprint of canola seed and oil. Market access
Print this page