A new corn research project is examining how to make N fertilizer applications more profitable for farmers and better for the environment. 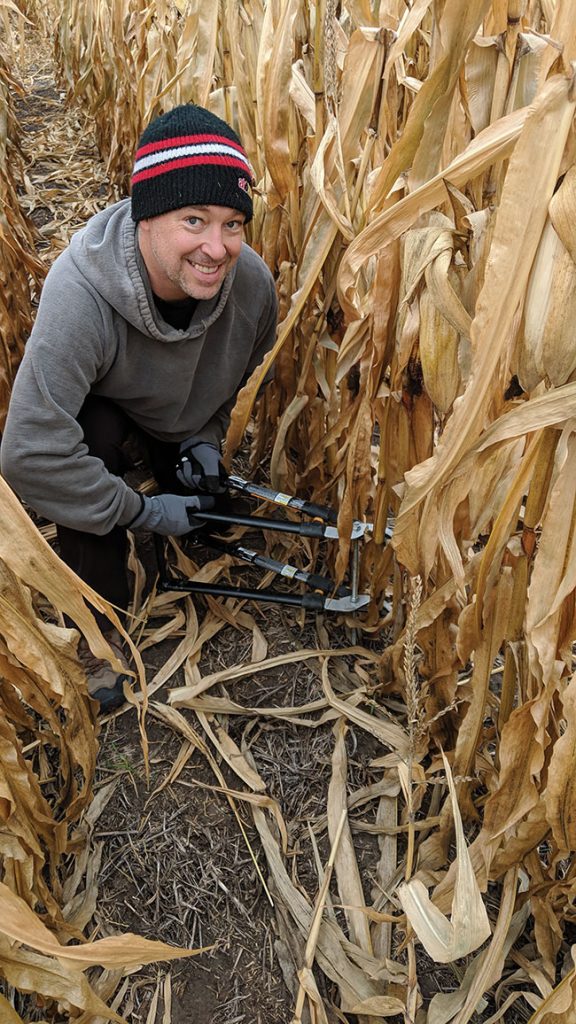 The project, entitled the Cross-Canada Agronomic and Environmental Benefit of Advanced 4R Nitrogen Management of Corn, is part of a larger corn research initiative led by the Canadian Field Crop Research Alliance.

Mario Tenuta, a soil science professor at the University of Manitoba, is leading the project with a team including researchers from multiple Agriculture and Agri-Food Canada centres, as well as Quebec’s McGill University and the University of Guelph in Ontario.

“The project will help corn growers to maximize profitability and lower environmental impact through use of 4R nitrogen practices,” Tenuta says, referring to the four Rs of applying fertilizer: at the right source, rate, time, and placement.

“If investment into 4R practices by growers is to pay in the short term, there must be compelling evidence that they can get more yield from the amount of nitrogen used,” Tenuta says. “We seek to determine what it pays to use 4R practices.”

During the course of the research, which is being conducted through replicated plot trials at locations in Manitoba, Quebec, and Ontario. Tenuta’s team will be working towards determining optimal application rates for nitrogen that provide the best balance of environmental stewardship and economic gain for corn producers. 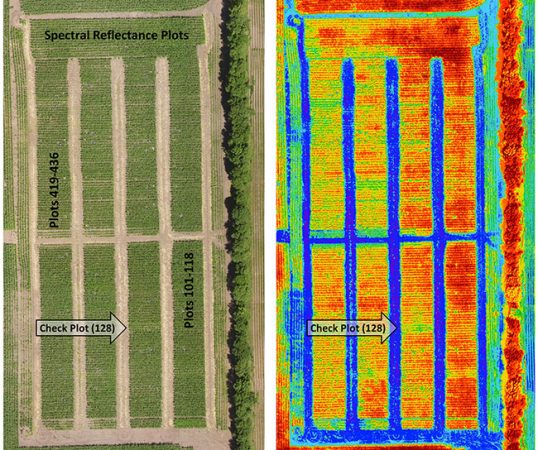 Side-by-side aerial views of a research field site located near Haywood, Man., that is part of the Cross-Canada Agronomic and Environmental Benefit of Advanced 4R Nitrogen Management of Corn project. The image at right was captured by a Normalized Difference Red Edge sensor and shows the spectral reflectance of the field. Photo courtesy of Matt Gervais.

According to Tenuta, the researchers are assessing increasingly sophisticated 4R practices, including using a novel approach of layering rates of N application with combinations of enhanced efficiency fertilizers, application timings, and placement methods.

With respect to increasing profitability for growers, Tenuta says it isn’t just yield that’s being examined. Other factors such as fertilizer costs and returns on investment for different nitrogen products and application methods are also being evaluated in terms of providing the most financial value for farmers.

With respect to increasing profitability for growers, Tenuta says it isn’t just yield that’s being examined. Other factors such as fertilizer costs and returns on investment for different nitrogen products and application methods are also being evaluated in terms of providing the most financial value for farmers.

Tenuta notes that nitrogen is the largest operating cost for grain corn producers, one reason being that N application rates in corn are higher in corn than for all other field crops, except for potato. He says those costs could climb even higher under carbon tax models proposed by government jurisdictions in Canada.

As Tenuta points out, practices that promote the more efficient use of nitrogen, such as precision N applications that provide just enough product to support plant growth at planting and in season, can take a big bite out of fertilizer costs.

“The effect of 4R practices on the best economical rates of fertilizer N is often overlooked but it should change if we are using N fertilizer much more efficiently,” he says.

Tenuta notes that among essential plant nutrients, nitrogen is one of the most difficult to manage, with significant losses often occurring both during fertilizer applications and afterwards. He says that’s partly due to corn being a long season crop which has most of its N uptake happening later than that of other grain crops. 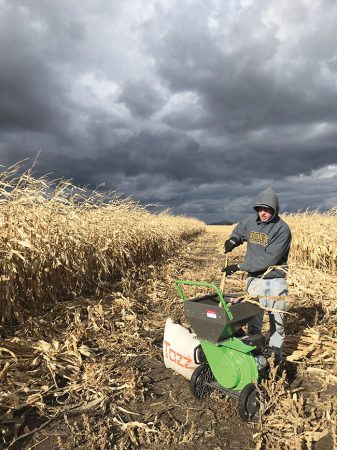 “If you put your nitrogen on at planting or pre-plant or even the previous fall, you have a longer period of time until a corn crop is taking up most the majority of that nitrogen, compared to something like spring wheat which will take the nitrogen up earlier,” says Tenuta, adding this this increases the risk of nitrogen loss due to environmental factors such as heavy rains.

Tenuta notes out nitrogen sources containing urea can be subject to a process known as volatilization, in which nitrogen can be lost as ammonia gas. Once soil microbes convert N fertilizer to nitrate, nitrogen can be released into the environment through leaching as well as surface water movement. Nitrous oxide, a powerful greenhouse gas, can also be produced.

Another important objective of the project is the development of tools to help growers the assess the most efficient in-season application rate, using multi-spectral hand-held spectrometers and aerial drones to estimate corn N uptake in season and response to top- and side-dressing fertilizer sources. 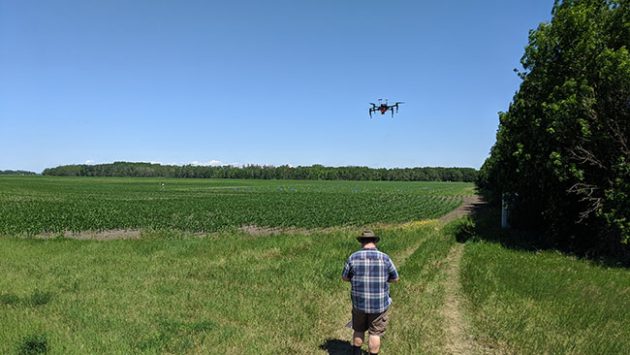 The project is slated to wrap up in 2021. Tenuta is confident that when the results are released, there’ll be no shortage of interest among corn producers and others in the ag industry, as well as government policymakers.

“With practical research such as this, especially when it comes to a big cost component of production and trying to improve that, people will be interested in it because it can have implications on their bottom line,” he says.

“There is a sense out there that we all want to do better for our environment.”

“There’s also more interest than ever in using our inputs better in agriculture, especially with nitrogen fertilizer,” Tenuta adds. “There is a sense out there that we all want to do better for our environment.”

Federal funding for the Cross-Canada Agronomic and Environmental Benefit of Advanced 4R Nitrogen Management of Corn research initiative was announced in January as part of Ottawa’s $4.1-million investment over five years to the Canadian Field Crop Research Alliance under the Canadian Agricultural Partnership’s AgriScience Program.

Fertilizer Canada is among the industry partners also helping to finance the project. Clyde Graham, executive vice-president of Fertilizer Canada, stated in a media release that the organization supports scientific research that improves best management practices in 4R nutrient stewardship for Canadian growers in all crop regions.

“These [BMP] recommendations improve confidence for Canadian growers who are facing increasing pressure to boost yields for export while contributing to national climate change goals,” he said.