Improving fertilizer use efficiency, reducing greenhouse gas (GHG) emissions and carbon footprints, thereby improving sustainability is becoming increasingly important to the agriculture industry and its markets. For agriculture, nitrous oxide (N2O) is a very powerful GHG, so reducing losses and intensity not only improves the GHG footprint of cropping systems, but also benefits growers directly by improving economics and efficiency. 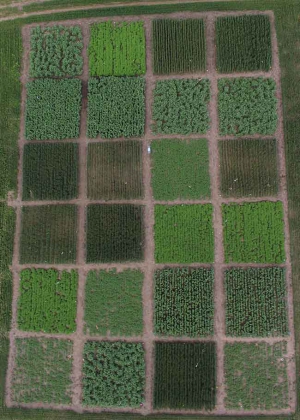 Researchers in Saskatchewan are mid-way through a four-year project trying to better understand the overall nitrogen (N) balance in cropping systems comparing lentil, field pea, chickpea and fababean side-by-side in rotation with wheat at the University of Saskatchewan Goodale Research Farm near Saskatoon. “One of our objectives is to be able to provide a better estimate of the overall N balance in the cropping system, including above and below ground N, differences in emissions and the amount of N fixed by different crops,” explains Reynald Lemke, research scientist with Agriculture and Agri-Food Canada (AAFC). Lemke is collaborating on the project with Richard Farrell and Diane Knight at the University of Saskatchewan. “The replicated trials in this study include a two-year crop sequence – pulses and wheat in year one, followed by wheat on all plots in year two.”

In year one, researchers used a stable isotope labelling method, which involves the use of non-radioactive isotopes that act as tracers, to help track both above and below ground N, and to determine how much N is fixed by the various crops and available the following year for the wheat crop. “This will help answer the question of how much additional N the pulse crop contributed, how much ended up in the following wheat crop and helps improve the accuracy of estimating the N credit,” Lemke says. “This approach also helps determine how much of the [carbon] C that was contributed by the pulse crop persists in the soil after the subsequent wheat crop is harvested.”

“We recently completed preliminary N balance and footprinting calculations based on the results from the first two years of the project,” Lemke explains. “The results from year one verified what we expected to see based on earlier research, which showed that the emissions from any of the pulse crops was low and comparable to emissions from the unfertilized wheat control plot. In addition, all four pulse crops showed the same results, which is good news in terms of greenhouse gas balance and [carbon dioxide] C02 footprinting.” Lemke emphasizes that these results should be considered preliminary and are based on the findings under the conditions at the specific location in one year.

In terms of N fixation, fababean fixed much higher amounts of N than any other crop, which previous studies had also shown. However, researchers were surprised to find that in terms of total N removed from the field at harvest in the crop seeds, fababean also removed the greatest amount of N, followed by pea, then lentil and chickpea. “The differences between the amount fixed and the amount removed at harvest should provide an indication of the net N credit or net value left for the next crop,” Lemke says. “The preliminary results show that for all four pulse crops the N credit ranged from 20 kilograms per hectare [kg/ha] to as high as 80 kg/ha of N. This shows there is definitely a clear benefit for all of the pulse crops, even at the lower end of 20 kg/ha that becomes available to the next and future crops.”

Emissions were regularly measured over the entire cropping season from immediately after snow melt in mid-April to freeze up at the beginning of November. “We expected that the amount of N2O lost from the system would mostly be related to fertilizer application, and to a lesser extent to the crop residues. We also wondered if there would be any difference in losses because of the interaction with fertilizer and each of the different pulse crop residues from the previous year.”

Results showed during the eight-week period immediately after fertilizer application, over 80 per cent of N2O emissions were from the fertilizer application – the highest contribution. However, when considered over the entire season (thaw to freeze up) emissions from the various crop residues made a substantial contribution, somewhere around 20 or 30 per cent of the total emissions. Emissions from the fertilizer were very high but for a short period of time, while emissions from the crop residues were low but lasted for a longer period of time. There was also some variation between the different pulse residues, although overall the differences weren’t significant except with lentil, where emissions were a bit higher.

“We were also interested in finding out if there might be a trade-off with the benefit of the pulse in the first year and any crop residue interactions in the second year,” Lemke says. “The good news is the results showed a clear benefit, with no trade-off. Growing pulses followed by wheat under these conditions at this site showed there is a real benefit in terms of the contribution of pulses to reducing the CO2 footprint of the cropping system in the first year without paying any penalty in the second year. As well, growers can likely expect over time that the N credit benefit from growing pulses every second year in rotation will continue, and may provide the opportunity to reduce N inputs for the following crop as we have seen in previous studies.”

“Overall, the pulse phase is where the real benefits were found both in terms of reduced greenhouse gas balance and the CO2 footprint,” Lemke says. “In the pulse rotation year, the total emissions were similar to the wheat control plot with no fertilizer, and lower than the following wheat crop. The main benefits are that in the pulse year, growers are avoiding the use of N fertilizer, so they get a real benefit both in terms of avoiding the energy input of producing that fertilizer as well as avoiding the direct N2O emissions from fertilizer in the pulse year. The results so far are pretty clear that CO2 intensity can be reduced from all aspects of the system by including pulses in rotation.”

The information gained through this project will contribute to providing better calculations and estimates for pulse and cereal cropping systems at the end of the four-year project in 2017, and ultimately for other rotational systems down the road. “We will be able to fine-tune estimates of the N credit available to subsequent crops, which will help growers improve fertilizer-use efficiency and cropping system economics across their rotations,” Lemke adds. “Improving our ability to more accurately calculate the CO2 footprint of crops grown in Western Canada and finding ways to optimize crop sequences to reduce GHG emissions and intensity will provide both an economic benefit to growers as well as address marketing and sustainability efforts.” Final project results will be available in early 2018.

This article originally appeared in the October 2016 issue of Top Crop Manager West.