In Saskatchewan, durum wheat growers have experienced serious losses to Fusarium head blight (FHB) in recent years. Although FHB infection was considered quite severe in 2014, infection in durum wheat crops was even worse in 2016. The weather conditions were a significant factor, but the high levels of FHB were compounded by the adoption of shorter rotations, a lack of highly resistant varieties and the availability of fungicides that only suppress the disease. 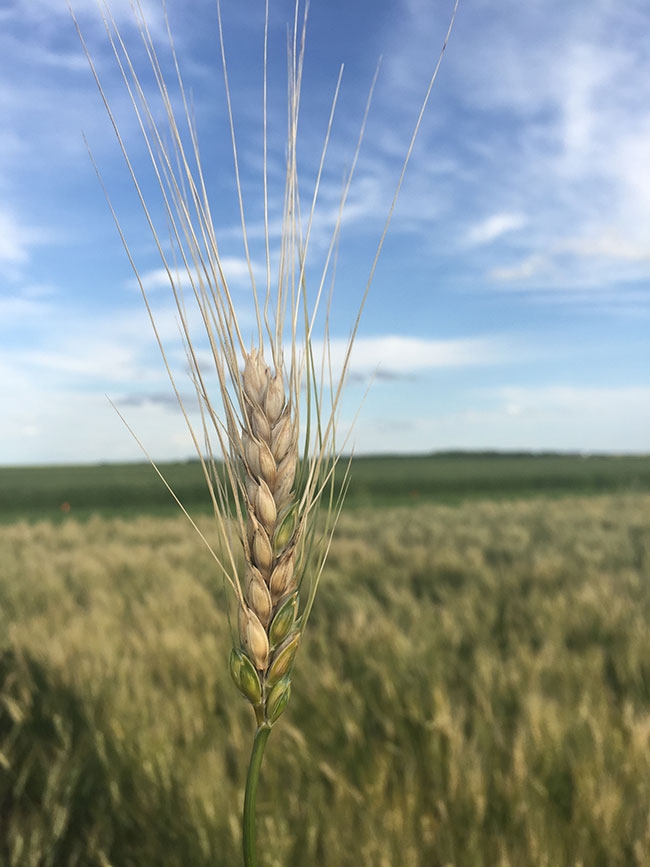 FHB infected wheat head in an untreated plot in Saskatoon in 2016. In Saskatchewan

Researchers at the University of Saskatchewan launched a three-year project in 2016 to evaluate fungicide timing for FHB management in durum wheat. Led by Randy Kutcher, an associate professor of cereal and flax pathology, and graduate student Gursahib Singh, the objective is to determine the most appropriate fungicide application timing for FHB management in durum wheat. Kutcher points out that although there has been other work done in spring wheat and winter wheat across North America, little research has been done in durum wheat.

Fusarium is a challenging disease with no major resistance gene; the trait seems to be controlled by many minor effect genes highly impacted by environmental conditions. So, although FHB-resistant varieties are a major priority, it will take time before better resistant durum wheat varieties become available.

“We are also not managing diseases like FHB very well in durum crops even with fungicides, where the efficacy has been inconsistent,” Kutcher explains. “The moderate activity may be due to the number of Fusarium species involved, and also because the available fungicides are registered for suppression only and are not completely effective. There are also some questions around fungicide application timing, which we decided to take a look at. After seeing some positive results from research in Japan using different application timings of fungicides, including a dual timing application, we decided it would be worth assessing the options under Saskatchewan growing conditions.”

Trials for this new three-year project are being conducted at four locations including Saskatoon, Indian Head, Scott and Outlook, Sask. The durum wheat cultivar CDC Desire is seeded at all locations and applications of the fungicide Caramba are being compared at five different fungicide timings using the biologische bundesanstalt, bundessortenamt und chemische industrie (BBCH) growth staging system. The timings include: BBCH 59, which occurs when 75 per cent of spikes have fully emerged from the boot; BBCH 61, which occurs approximately two to three days after spike emergence; BBCH 65, occuring about four to six days after spike emergence; and BBCH 69, which occurs roughly six to nine days after spike emergence. The dual applications occur at BBCH 61 or at flowering/anthesis and 20 days after (BBCH 73). Note the second late application (BBCH 73) may not meet the current timing for pre-harvest intervals, so additional data would be required to satisfy regulatory requirements if this option proves to be a good fit. The trials also include an unsprayed check and a sprayed check at all five BBCH stages. For more information about spray decisions, visit saskwheatcommission.com/producer-info/fusarium-risk-assessment-map.

“The first year results, although preliminary, are very interesting,” Kutcher says. “In terms of yield, the application at BBCH 69 was marginally better, which is not that different from what we would recommend for spring or winter wheat. However, again, the caution is this is very preliminary and based on one year of data; the results could be different at the end of the trial and the analysis of 12 site years of data. One other point to note is that the sprayed check, which included five applications, was rarely better than a single application, proving that point that just because one application is good doesn’t mean five times is better.”

Kutcher and Singh are still waiting for the toxin data and testing results, however, preliminary results show the amount of Fusarium damaged kernels (FDK) was quite a bit lower with the dual application. If it can also bring down the toxin level, that could be a quite a benefit.

FHB infected wheat head in an untreated plot in Saskatoon in 2016.

“Although fungicides can sometimes substantially reduce FDK symptoms so the resulting sample visibly looks good, toxins can still develop, downgrading the sample and increasing risk to susceptible humans and animals,” Kutcher explains. “The correlation between FDK and toxin levels is not as strong as previously thought, however, there is still some relationship.”

Another aspect of the project includes identifying different Fusarium species and their proportion, along with the toxins produced.

The testing of initial samples indicates the most common and prevalent pathogen species in fields was F. graminearum, however three other species identified include F. avenaceum, F. culmorum and F. crookwellense. Initial testing also confirmed the existence and toxicity of five of a possible 15 mycotoxins tested, including DON (deoxynivalenol) or vomitoxin (the most commonly produced toxin), as well as 3ADON; 15ADON, NIV (nivalenol) and T2 (trichothecene). These mycotoxins can cause health-related issues in human food and animal feed for some livestock species.

“Plant breeding efforts are underway for better FHB-resistant varieties, but they are long-term solutions,” Kutcher explains. “In the shorter term, growers should select the most resistant varieties available, use a timely application of triazoles for additional suppression of FHB when warranted, and implement a four-year rotation. For diseases such as FHB and others such as blackleg in canola, a four-year rotation is recommended to allow for the crop residue to break down and reduce the risk of disease. More diverse and longer crop rotations are a relatively cheap and quite effective way to manage disease, insects and herbicide-resistant weeds. If you don’t use rotations, then it will cost more for inputs and even with inputs, we are not managing diseases like Fusarium very well with fungicides, as they provide suppression only.”

This project will continue for two more field seasons, with the final results on the most appropriate fungicide timing for FHB in durum expected to be available in early 2018.