Ascochyta is a fungal disease that can cause substantial yield losses in field pea under wet, cool conditions, especially if the disease infects the crop early in the growing season.

According to Dr. Bruce Gossen, research scientist with Agriculture and Agri-Food Canada (AAFC) in Saskatoon, Saskatchewan, ascochyta is a disease that is always present.

“I don’t think I’ve ever walked into a pea field in Western Canada where there wasn’t at least some ascochyta blight,” he notes.

Fortunately, Gossen and other Prairie researchers continue to work on ways to improve control of ascochyta.

What’s in a name?

Sometimes this disease is referred to as “ascochyta blight complex” because three different fungal species can cause the disease in field pea: Ascochyta pinodes, Phoma medicaginis and Ascochyta pisi. The disease is also often called “mycosphaerella blight” because Mycosphaerella pinodes – which is the sexual form of A. pinodes – is by far the most common cause.

The disease can affect all parts of a pea plant. The symptoms differ somewhat among the three fungal species, but in general the initial symptoms are small brown to black or purplish lesions (damaged areas) on the leaves and stems. As the disease progresses, the lesions enlarge and coalesce, causing blighting, foot rot, weakened stems and lodging, and infected pods and seeds. The damage to the leaves reduces the plant’s photosynthetic capacity, which reduces seed yields. Lodging not only reduces harvestability, but also further promotes the disease by trapping moisture in the canopy. Lesions on the pods may cause discoloured, shrunken seeds and affect crop yield and quality.

The ascochyta fungi overwinter in soil, seeds or crop residues, and can survive for several years. In the growing season, all three pathogens produce asexual spores, which are dispersed by rain splash over short distances, causing infection in the crop canopy.

But M. pinodes also produces sexual spores. “Mycosphaerella pinodes usually releases sexual spores in the spring or early summer. Those spores are dispersed mainly by wind. They fall onto young pea plants and initiate the epidemic,” says Gossen. “Then there’s secondary spread from asexual spores produced on infected leaves within the canopy. In Western Canada, a lot of the disease is probably from the wind-borne spores, with not much secondary spread until quite late in the season after the crop canopy is closed, because humidity tends to be low on the Prairies and rainfall events tend to be short, sharp bursts.”

Mycosphaerella pinodes can be an especially tough foe. “Because sexual reproduction is an important part of its life cycle, M. pinodes is genetically diverse,” notes Gossen. “And within the pathogen’s population there’s resistance to just about everything we have ever found that might be a good source of resistance [in pea plants]. Because the wind-borne sexual spores are dispersed over large distances and because portions of the population can already overcome most sources of resistance, the pathogen population is very quickly able to adapt and overcome any resistance we deploy in a field.”

According to Gossen, A. pisi used to be far more important on the Prairies. “However, breeders inadvertently included sources of resistance to A. pisi when breeding for pea yield because those lines yielded better. So those resistant lines became the basis of the material we’re using now. That left a void that M.a pinodes then managed to fill.

“Recently we’ve started seeing in some limited areas in southern Saskatchewan more samples of seed that carry A. pisi,” adds Gossen. “That may indicate a change in production practices or perhaps the pathogen is very slowly overcoming the resistance in the existing cultivars. This is not a matter for alarm; it’s just something we’re keeping an eye on.”

Gossen recommends that about 95 percent of mycosphaerella blight management occur before planting. One key step is to select a cultivar with a better ability to fight the disease.

“None of the current varieties have a high level of resistance to mycosphaerella blight, but some of them are moderately susceptible while others are highly susceptible. If you’re having any kind of issue with mycosphaerella blight in your field or your area, then choose varieties with moderate rather than high susceptibility,” says Gossen, who adds cultivars that tend to resist lodging are a good choice, too.

Crop rotation is also helpful. “If you grow peas on peas, for example, you are almost certain to get more disease, get it earlier, and have it causing more problems than if you have at least a one-year break or preferably a two-year break between pea crops.”

Gossen’s third tip is to consider the field history of nearby fields. “If a field right next to your field was planted to peas the previous year and had a bad epidemic, you might consider not planting peas in your field this year or, if you do plant peas, be ready to deal with more disease in the field.”

He also recommends testing pea seed for germination and vigour, but not for the disease. Recent research by Gossen and his colleagues showed the level of seed-borne infection wasn’t very important to the level of mycosphaerella blight in a field, but it did significantly affect pea yield. “Infected seed almost always has a lower germination. To my mind, getting an estimate of germination is more important than looking for the level of infection in the seed.”

And his fifth tip is to plant your pea crop early, as soon as soil conditions are suitable. “Planting early increases the crop’s yield potential,” says Gossen. “A high yield potential means that even if you lose a little bit of yield to disease, you’re still yield ahead and money ahead.”

If you’ve taken these initial steps, but the disease still becomes a problem, then consider applying a foliar fungicide.

“There are several fungicides which can be applied at early to mid-flowering that are quite effective at reducing levels of disease. In a wet season, you might need two fungicide applications to control the disease. In a dry season, probably no applications of fungicide are justified,” notes Gossen.

Researchers from AAFC, provincial governments and universities in Western Canada are continually investigating new possibilities for improving ascochyta control in field pea. Gossen says pulse grower groups are a vital funding source for this research. “The grower groups recognize that diseases have been a major constraint to pulse production in Western Canada. They’ve put a lot of money into breeding and plant pathology research, and it’s having an important impact.”

Breeding programs at AAFC and the University of Saskatchewan’s Crop Development Centre (CDC) are working on various approaches to improve resistance or tolerance to the disease, although it is a challenging task given the ability of M. pinodes to overcome resistance.

According to Gossen, recent research at the CDC indicates an intriguing possibility for field pea breeding. The results show an association between increased stem strength and reduced mycosphaerella blight. “I think one of the best options would be to develop cultivars with stronger stems so infected stems wouldn’t break and the crop wouldn’t lodge as easily,” he notes. “That would have a large impact on the amount of yield loss suffered every year in Western Canada. Dr. Tom Warkentin, a pulse breeder at the CDC, is looking into this possibility.”

Gossen was involved in a small plot trial in the late 1990s that showed lodging alone lowered field pea yield more than any amount of disease that developed in the plots. “So cultivars that stand up better are not only easier to harvest and easier for weed and disease control, but they also have more yield,” he says. “If you could control both the disease and lodging, then you would get huge benefits.”

Gossen’s current areas of interest include fungicide issues for mycosphaerella blight control. For instance, a key problem he wants to solve is that although foliar fungicide applications provide good control of the disease, it is really hard to predict when that control will result in a major yield boost. He suspects the interaction between the disease and lodging is at the heart of solving this problem.

“The disease takes the leaves off, which affects yield, but it is a small, incremental effect until the disease gets into the stems, the stems break and the crop lodges. So there’s a series of small incremental impacts, until you reach the breaking point and then you get big yield losses,” he notes. “We need to figure out what exactly we have to do to fix this – whether we need to control the disease earlier so the crop doesn’t get to that breaking point, or if we need to bring in resistance genes from much wider crosses, or whether it’s actually possible to breed for stronger stems that don’t break even when there’s lots of disease. If we can figure that out, then we can tell growers with some assurance what they need to do to control the disease and get a good yield boost.”

Another research interest is the possibility that strobilurin fungicides have a secondary effect on the health of pea plants. Gossen and Dr. Sabine Banniza of the CDC are hoping to be granted funds to investigate this issue for ascochyta blight in peas next year.

Hopefully, through these and other research studies, western Canadian field pea growers will have improved control strategies for ascochyta blight complex in the near future. 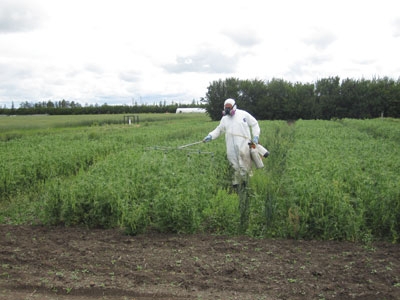 Applying a fungicide to small-plot research on ascochyta in field pea. Ascochyta is a fungal disease that can cause substantial yield losses in field pea under wet