Developing better fertilizer recommendations for growers and a tool for breeders. 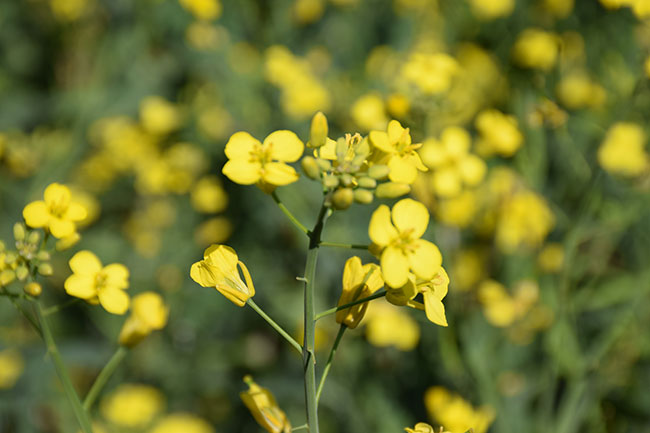 A multi-site experiment looks to improve canola’s nitrogen-use efficiency, yields and standability, with the goal of helping growers across Canada reap better returns on their canola crops. Photo by top crop manager.

A project happening across Canada is aiming to improve canola’s nitrogen use efficiency, yields and standability – three related factors that will help growers reap better returns from their canola crops and enhance the sustainability of their farm.

“Nitrogen (N) is an essential nutrient required in large quantity for canola crop production, but its use efficiency by the crop is relatively low,” explains Bao-Luo Ma, a research scientist with Agriculture and Agri-Food Canada (AAFC) in Ottawa.

“This creates two major concerns: low efficiency means low profitability for canola growers, and low efficiency implies that a large amount of unused N could be lost from the soil, thereby causing a negative impact on the environment.”

Ma is leading the five-year project, which started in 2018, to address these concerns.

The project’s main objectives are to assess the agronomic and economic responses of canola cultivars to N fertilizer management, and determine best N management practices under different soil and cropping conditions.

To achieve these objectives, Ma and his collaborators are conducting two field experiments at eight sites: Ottawa; Brandon and Carman, Man.; Swift Current, Melfort, and Scott, Sask.; and Olds and Beaverlodge, Alta. In both experiments, the nitrogen is applied as urea.

One experiment is examining the responses to different N timing options (preplant versus split application) and different N rates (zero, 50, 100, 150, 200, 50+50, 50+100, and 50+150 kilograms of N per hectare), and the treatments are applied to two different canola hybrids. For the split applications, the in-season N is applied at the four- to six-leaf stage, which is usually about a month after planting.

Some findings from Ma’s earlier studies have suggested that split nitrogen applications might have yield and standability advantages. Those studies indicated that side-dressed N appeared to be better used by the crop, with a split application producing a higher yield than a single pre-plant application. The studies also indicated that applying more N at planting seemed to promote stem elongation early in the plant’s growth, which could result in a weaker stem base that is more prone to buckling. Ma wants to see if this current experiment will confirm those preliminary results.

The multi-site data from both experiments will enable the researchers to develop N management recommendations specific to different growing conditions across the country.

One of these studies aims to identify root architecture traits for efficient N acquisition, high nitrogen use efficiency (NUE) and stronger root anchorage.

“However, accurate quantification of the canola root system remains challenging because of the inherent nature of root architecture as the ‘hidden half’ of the plant.”

Traditional methods to determine root architecture involve digging up the roots, carefully washing them and then measuring things like root length, volume and surface area. However, Ma and his research group have previously investigated a much simpler way to estimate root architecture by measuring an electrical signal called root capacitance. Root capacitance is measured in the field in just a few seconds using a small meter with one electrode attached to a needle in the stem and the other electrode in the soil.

In the current study, measurements include root capacitance, stem base traits, simulated stem and root lodging-related parameters, and root volume, surface area, length and biomass. Because these measurements are so time-consuming, the root architecture study is only taking place at Ottawa. Ma’s group is conducting the measurements for both canola hybrids but only for selected N rates (0, 100, 200, 50 + 50, and 50 + 150 kilograms of N per hectare).

“We are attempting to establish relationships between root traits and yield, and root traits and NUE, so that sensitive traits can be identified for assessing differences in NUE and yields among different N management strategies,” he explains.

The other belowground study, which is led by Luke Bainard, is looking into the taxonomic and functional response of the soil microbial community to the different N treatments.

“Soil micro-organisms play a critical role in the cycling and transformation of nitrogen in soil. They regulate the availability of nitrogen to crops in agricultural systems and environmental losses through leaching and greenhouse gas emissions,” Bainard explains.

“By examining the soil microbiome, we can complement the other aspects of the larger project – agronomy, physiology, soil chemistry – to provide better insight into the fate of nitrogen fertilizer in soils of agricultural systems.”

He notes, “We are primarily using next-generation sequencing to understand how different nitrogen and crop management strategies alter the diversity and community of micro-organisms that live in the soil and the roles they play in transforming nitrogen.” 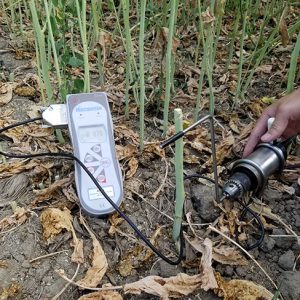 As part of the project’s root-related measurements, Ma’s technician performs a simulated root lodging test, using a device that determines the force needed to push over a plant. Photo courtesy of Bao-Luo Ma. 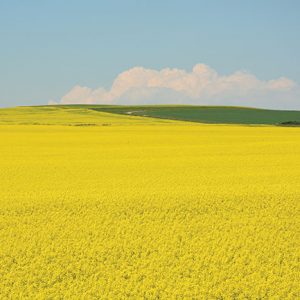 The project’s preliminary results show canola yields positively responded to N application rates, and in some cases, the split rate contributed to a better yield, compared to the same amount of N applied at preplant. Photo by top crop manager.

Initial findings
Ma highlights some of the project’s preliminary results from the two main experiments. “Canola yields positively responded to N application rates. In some cases, the split-N resulted in a better yield response compared to the same amount of N applied only at preplant,” he says.

“Under favourable growing conditions, the estimated maximum economic rate of N (MERN) averaged 170 kilograms of N per hectare, with achievable yields up to 4.8 tonnes per hectare, but this varied largely among site-years. Canola grown in rotation with wheat generally produced higher yields, with a lower MERN requirement than canola grown after canola.”

These findings suggest that plant breeders could use root capacitance as a tool for selecting breeding lines with better NUE and higher yields.

In 2020, this national project was strongly affected by COVID-19 restrictions. Field planning and preparation were delayed, and the plots were either seeded late or not at all. For example, in Ottawa, Ma’s group planted the plots about two to three weeks later than normal. Generally speaking, later seeding tends to reduce canola yields, so it may have affected the results for 2020.

In addition, because of COVID restrictions, the researchers had to reduce project activities by 40 per cent. Further complicating this situation, the different research centres had different interpretations about how to implement this reduction. In Ottawa, Ma’s group was allowed to plant both of the main field experiments, but they could only collect some key data, like yield and crop growth data. They weren’t able to conduct the root architecture study. The collaborators at the other sites were required to omit the first main experiment and only conduct the second one.

Looking ahead
Ma hopes that 2021 will be a more normal year and that the project team will be able to make up for some of 2020’s challenges and continue towards achieving the project’s valuable outcomes.

Those outcomes all work together to increase the profitability of canola production and improve long-term soil health and environmental sustainability. And these benefits will contribute to the societal benefits of affordable food and a healthy environment.