Features Agronomy Cereals
Improved segregation in wheat is the goal

Whether the industry is ready is the question.

For the wheat industry in Ontario, 2004 will be remembered as a year that recognized
the need for improved segregation. An accidental blend of soft and hard wheats
at Griffith Laboratories in Toronto, early in the year, caused an extensive
and expensive shutdown of operations, and illustrated the need for a more stringent
segregation process.

To some involved in the wheat trade in Ontario, the issue is not a matter of
capacity, it is a lack of economical justification for paying more for the specific
handling. For others, it is a lack of understanding throughout the industry,
since wheat always has been a commodity, and specific traits have only recently
begun demanding higher values.

The bottom line, according to many, is the sustainability of Ontario's wheat
industry.

To say there is no willingness to explore greater means of segregation is simply
untrue, says Chris Vander Kant, grain market development co-ordinator with Thompsons
in Blenheim, Ontario. There is certainly a recognition of the need for segregating
various wheat classes, if not varieties. "I'm just not sure the industry
is prepared to go in that direction too quickly," he says. "If I look
at what's been going on in the industry, I'm noticing some rationalization with
respect to companies talking about plant closures and continued consolidation."

From Vander Kant's perspective, the stumbling block is the cost involved in
building a greater degree of separation within the system. That, and the fact
the majority of the wheat in Ontario is still grown for a commodity market.
"The companies involved must see an economic advantage in order to warrant
the added costs," says Vander Kant.

There are examples of very successful programs to-date, with proof the supply
chain can accommodate IP production. The challenges will come from potential
issues such as quality, logistics of segregation and the limitations of origination
from a procurement and operations perspective. Vander Kant believes there are
great opportunities for IP wheat production, but it will be a low percentage
of the total wheat acres in Ontario.

Slow but steady pace to change
But just because change does not come overnight does not mean it will never
arrive. Jeff Reid, marketing manager with C&M Seeds in Palmerston, Ontario,
believes growth is possible, especially since the infrastructure is well established.
"I can't imagine a better place to be segregating wheat than in Ontario,
when you look at the number of elevators across the province and the segregation
ability not only in the country, but at the terminals," says Reid, citing
Prescott as an example, with close to 400 different segregation spaces.

According to Reid, there are two primary barriers along the road to improving
IP and segregation of wheat: first is the same hurdle facing the soybean sector
in IP markets, namely the premiums. "Recently, we haven't seen as significant
a spread in values between wheat classes as we ordinarily do. When those spreads
decrease, there is less monetary incentive to segregate. The same issue challenges
the IP soybean market at times," he explains.

Another factor is the control wielded by wheat's downstream users. Reid says
the seed industry is largely focussed on change through developing new varieties,
often on a yearly basis. "But like it or not, the flour milling trade is
very traditional, very conservative and resistant to change," says Reid,
adding the seed trade is working to close the gap between the two extremes.
"We're at the stage where the flour mills are starting to gain more confidence,
particularly with hard red winter wheat in Ontario. It's been around long enough,
and it's proven to have enough volume and functionality that we're starting
to gain more interest from bigger end users."

Reid adds that as the wheat industry continues its move away from single-desk
selling and into an open market, it will necessitate the mills becoming more
integrated with their suppliers.

Segregation or IP: which is which?
On the segregation side of the issue, Jennifer Kilbourne believes every aspect
of the wheat industry must understand the importance of its development, and
what will happen if it does not. On the seed production side, there is the recognition
that things must be kept separate, says Kilbourne, grain merchant for Cargill
AgHorizons in Strathroy, Ontario. But on the production side, things begin to
falter. "A producer can say, 'Yes, I have red wheat', and that's fine,
but is it hard, is it soft, is it a strong gluten variety?" she asks. "There's
a shortfall in awareness by producers that not all wheat is equal, not all red
wheat is equal, and not all soft red wheat is equal."

Why it becomes a hard concept, continues Kilbourne, is that so much of the
wheat market is still a blended commodity. Some growers have their fields custom
planted, some simply grab another few bags of seed to finish their planting.
There needs to be an understanding that some wheat is good for bread and some
wheat is good for crackers. "It's just not good if you get them mixed up
because your bread will look like a cracker," she says. "We're not
just growing wheat anymore, we're growing a specific class or specific variety
of wheat and it's just one more step in the process of wheat production, one
more knowledge set."

At stake is the continued success of the industry in Ontario, based on the
success of the millers or bakers. "It's thousands of dollars, it means
running a line or stopping a line," says Kilbourne. "It means using
Ontario wheat or going somewhere else where you're more certain you're not going
to get certain classes mixed together." 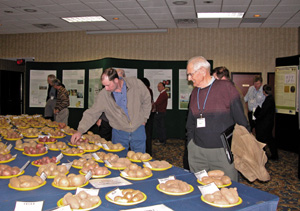 Perhaps too much is at stake
To Peter Johnson, that argument can be taken a daunting step further to the
demise of the entire wheat industry. As the cereal specialist with the Ontario
Ministry of Agriculture and Food, he believes the risk is much larger than some
understand. "If we fail, we do at our own peril, and I'm not trying to
downplay the issue because it's phenomenal," he says. "On the other
hand, people need to know that for the most part, we're doing a respectable
job, but it's not good enough for every market."

Johnson echoes Kilbourne's statement about there being two different markets.
For wheat travelling overseas, as long as it is Grade 2 and meets test weights
and the right falling number, it will meet customer expectations, regardless
of whether it is soft or hard red. And that surplus commodity market undermines
the process of moving the segregation and IP system forward. "There's no
question that this is a massive issue," explains Johnson. "Ontario
grows the highest average wheat yields in North America, we grow more types
of wheat than any other jurisdiction in North America, so should we grow wheat?
Absolutely, because we can do it the best."

In fact, Johnson maintains that Ontario growers can offer the mills essentially
every type of wheat, even if not in the quantities they need. "But we're
working that way, we will evolve that way, and better fit the market needs,"
he assures. "Ontario has the third largest milling capacity in North America,
so if you put it all together, it's a great success story."

The fly in the ointment, concedes Johnson, is that they must be kept as a pure
stream, and that is where the system is not as good as it could be. "As
an industry, we have done an excellent job for the most part, of maintaining
our different classes of wheat in the appropriate stream," he says. "But
if we aren't vigilant and we don't make sure we keep it as tight as we can,
then we really are setting ourselves up to fail, it's that huge."