Cutworms are present across the Prairies, and in some years some species of cutworms can reach levels that are of economic concern in field crops. The focus of a five-year project conducted across the Prairies resulted in the development of better identification tools, a better understanding of cutworm biology and their natural enemies, and a management guide to improve cutworm monitoring and control in different crops. 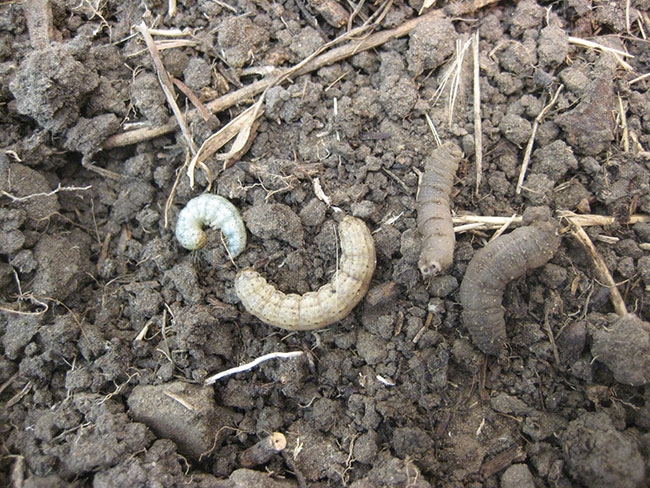 On the left are early cutworm larvae and on the right are the larvae of a cranefly. Cutworms are present across the Prairies

Led by Kevin Floate, research scientist with Agriculture and Agri-Food Canada (AAFC) in Lethbridge, Alta., this multi-faceted five-year project was initiated in 2012 with funding from the Canola Council of Canada and completed in 2016. A primary outcome of the project was the release of a field guide in 2017 providing identification and management of 21 cutworm pest species in the Prairies, called Cutworm Pests of Crops on the Canadian Prairies: Identification and Management Field Guide. The project included researchers with AAFC (Beaverlodge, Lacombe and Lethbridge, Alta., and Saskatoon), the University of Alberta, the University of Lethbridge, Lethbridge College and provincial entomologists from Alberta, Saskatchewan and Manitoba.

“Cutworm species can be difficult to identify visually, even for experts,” Floate explains. “One of our objectives was to develop accurate and rapid methods of identification, which are required to maximize control methods during cutworm outbreaks. We were successful in developing a multiplex PCR [polymerase chain reaction] molecular tool to detect and identify five key cutworm species, whether it is an egg, larva, pupa, or moth. The simple test compares the DNA of an unknown species and if it matches the DNA of any of the five key species, then the test result is positive. The protocol for this quick and easy test has been published and is now available for use by diagnostic labs.”

It is difficult to predict the arrival and numbers of these species, which arrive in the Prairies as a moth, lay their eggs and hatch in the fields later in the season. Some species have one generation per year, while others can produce two or three generations per year. As well, some species will have a preference for broadleaf crops, others prefer cereal crops, but this is not a hard and fast rule and cutworms will eat what is available.

“Management begins with field scouting early in the spring when emerging crops are vulnerable to cutworm damage,” Floate says. “Newly germinated seedlings and small plants are most at risk, as cutworms can cut off and kill the entire plant. As plants get larger, cutworms may only nip off a leaf, leaving the plant to survive and continue to grow. One of the challenges in scouting cutworms is different species have different feeding habits. There are above-ground, soil surface and below-ground feeders, so scouting requires being aware of the different types and looking for various clues. Cutworms tend to be most active later into the evening when conditions are cooler and relative humidity is higher. Depending on the crop and larval stage, a cutworm species may exhibit more than one type of feeding behavior.”

Start monitoring fields in the spring when conditions begin warming up. Field patches that appear to be thinning or becoming bare, particularly in silty soils or soils at the top of rolling hills may be a particular risk. In those areas, carefully dig around in the top 2.5 to five centimetres (one to two inches) of soil around the base of severed plants within gap rows or around the base of healthy plants at the end of these gaps. Also search the soil at the base of healthy plants in the middle of bare patches. Newly hatched larvae are very tiny and will actively feed until they reach up to an inch in size. Once caterpillars mature and are generally larger than an inch in size, they tend to be mostly done feeding as they prepare to pupate.

On the left are early cutworm larvae and on the right are the larvae of a cranefly.

“Economic thresholds have been developed for the many of the cutworm species and are outlined in the field guide,” Floate says. “If scouting reveals that economic thresholds have been exceeded and cutworms are still actively feeding, then producers will need to make a decision about whether or not to implement a chemical control option. Cutworm damage usually occurs in patches within a field, so if producers decide to spray, target the affected area and a margin of about 10 metres surrounding the damaged areas. Areas of visible damage have already been attacked and cutworm larvae will be moving away into adjacent areas of the field onto new plants. Spraying an entire field is usually unnecessary. Targeted spraying of damaged areas and surrounding margins is a good strategy for managing populations, reducing costs and equipment wear and tear, but most importantly for protecting natural enemies.”

One interesting finding is there are many species of beneficial insects already in the field working to control cutworms. Spraying an entire field can wipe out beneficial insects such as parasitic wasps or predacious beetles. Floate notes that although beneficial insects will probably not stop a cutworm outbreak in time to save the crop, a healthy population may reduce the duration or size of an outbreak or keep numbers below economic thresholds. A chemical control option may still be needed to stop a cutworm outbreak, but applying chemicals only where needed in the field can leave beneficials to continue providing natural control.

“To better understand the biology and species of parasitoids and levels of parasitism, we collected hundreds of cutworm specimens from all three prairie provinces over three years,” Floate says. “We reared these cutworms indoors until they either became adult moths or parasites emerged from the larvae. We identified at least three species of flies and at least 13 fairly common species of parasitic wasps, each species producing from one to a few hundred parasites from each cutworm.

One of the species, a common Eurasian and North African parasitoid, was unknown in Canada or North America until we identified it in 2013. Overall, we estimated that in the samples collected, about 20 per cent parasitism or more was common, which can be a very important component of cutworm population management. Therefore, being patient and letting this army of beneficial insects do their job is a good practice.”

The project also assessed cutworm outbreak cycles and the factors influencing population levels. “There are always small cutworm outbreaks across the Prairies or local outbreaks in most years,” Floate adds. “However, in some years there may be a lot of outbreaks causing cutworm damage over a large geographic area. What seems to be the underlying factor of a cutworm cycle, which typically occurs every five to seven years, is the weather pattern. For cutworm eggs or larvae to successfully overwinter depends on what the winter conditions are like. A cold harsh winter with little snow cover will tend to kill overwintering eggs or larvae and reduce numbers. However, a cold winter with lots of snow will improve survival. A wet spring can result in higher levels of disease pathogens attacking cutworms. So a series of two or three favorable winters and optimal spring conditions can keep ramping up cutworm numbers and create a peak cutworm cycle, while unfavorable winter and spring conditions can terminate that cycle.”

The results of the various aspects of the project formed the development of the Cutworm Pests of Crops on the Canadian Prairie: Identification and Management Field Guide. The guide provides detailed information on each of the important economic cutworm species, with additional sections on general biology, history of outbreaks, scouting techniques, the important role that natural enemies play and a list of additional information sources. Although the guide focuses on Prairie cutworm pests, the guide will be useful for other areas where these species also occur. The field guide is available online here:
publications.gc.ca/collections/collection_2017/aac-aafc/A59-42-2017-eng.pdf


Related
Scouting for cutworms: how to identify and what you should know
Flea beetles and cutworms found in Manitoba fields
Cutworm review
Monitoring multiple cutworm pests and saving the bees