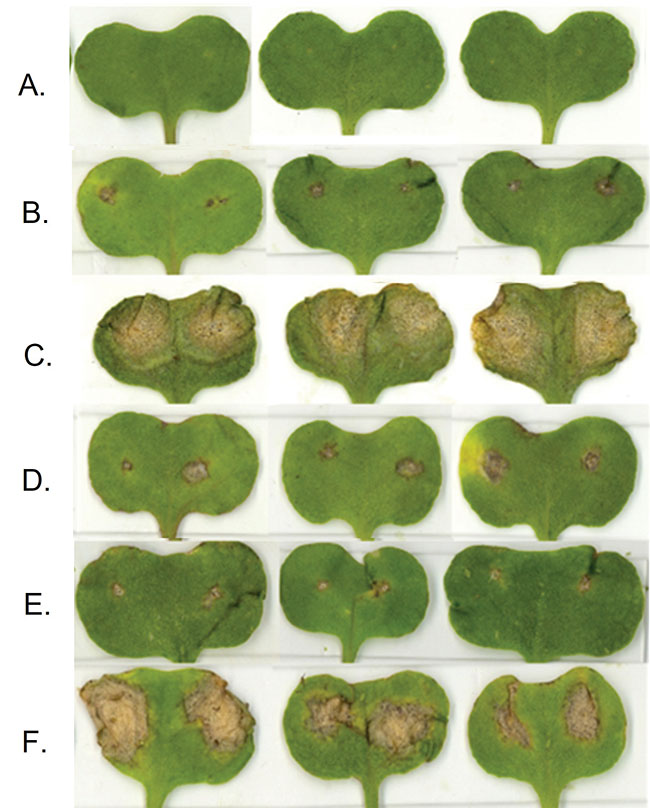 Dilantha Fernando is a professor in the University of Manitoba’s Department of Plant Science and co-author, with Rasanie Padmathilake, on a new paper that shows prior infection by a less virulent pathogen can successfully “immunize” canola against a highly virulent pathogen.

Blackleg is caused by a complex of two species of fungus: Leptosphaeria maculans and Leptosphaeria biglobosa. Until the 1990s, when resistance genes were introduced, the disease caused massive economic losses in Western Canada. Farmers now deploy a system of resistance gene rotation to manage blackleg. But over the last several years, disease incidence levels have been increasing.

In the near future, new controls will be necessary, says Fernando–and biological control techniques like this show promise.

Here’s how this one works.
L. biglobosa is a less virulent strain that causes much less disease than L. maculans, Fernando explains. It comes late in the season in Canada, after canola has already been infected with L. maculans, and is potentially moving toward yield loss.

If the natural system is reversed, and plants are infected with L. biglobosa first, natural defence genes in the canola plant are triggered before the more severe strain hits the field.

“In Manitoba or Saskatchewan, you’ll see L. maculans  infecting first and then L. biglobosa. At that point it [offers] no biological control because L. maculans has already done its job,” says Fernando. “If we inoculate with L. biglobosa at the time the plant is most crucially vulnerable to L. maculans infection, mainly from the cotyledon stage to about the two- to four-leaf stage, can we get good control?”

Experiment design and results
Fernando and Padmathilake set up the trial as a greenhouse experiment. They produced the spores of both strains in the lab, then brought them to the greenhouse where seven-day-old seedlings were growing. At that point they inoculated them with the biocontrol agent (L. biglobosa), and with the pathogen (L. maculans) in the same region of the plant, either at the same time (co-infected), or after a 24-hour period.

They waited four days from inoculation before observing results. This happened in a few ways: phenotypically, or by observing disease lesions on cotyledons, as well as by studying leaf tissue under a microscope to see the movement of fungal mycelia in the plant, and finally on a molecular level by using quantitative PCR to assess the plant’s immune response to the treatments.

To differentiate the two fungal strains, they tagged them with fluorescence: one green, one red. “Then you see the pathogen’s mycelia in the control is nicely growing inside the leaves, and when you inoculate [with the biocontrol agent] before or at the same time, then you see that the biocontrol agent has curtailed the growth of the pathogen inside the stem,” he says.

Using qPCR, Fernando and Padmathilake then looked at which defence genes had been triggered by the treatments.

“The biocontrol agent isn’t eating up the pathogen; it’s triggering the plant’s own defenses to protect the plant from the pathogen. That’s why it’s important whether it’s a pre-inoculation or co-inoculation,” Fernando explains.

Interestingly, the virulence of L. maculans was “hidden entirely” when co-inoculated with L. biglobosa, or post-inoculated by one day, the authors write in the study. In other words, the pathogen wasn’t inhibited if L. maculans infection came before L. biglobosa inoculation. That suggests infection by the latter induces the host plant’s defense system.

But if L. biglobosa was inoculated first, the plant was protected–the whole plant, says Fernando: once the defence genes are triggered, the effect is systemic.

How could this research be applied in the field? In two ways, says Fernando–through breeding, or through the development of a biocontrol product for in-field use.

The latter, he believes, is the faster route. The research has been done; the next step is for a company to scale up the technology to field trials and, ultimately, achieve registration. Fernando hopes this happens soon.

“We’ve done the science of it, now [we hope to] get a company excited about it,” he says.