Irrigation
Imbibition: nothing else matters 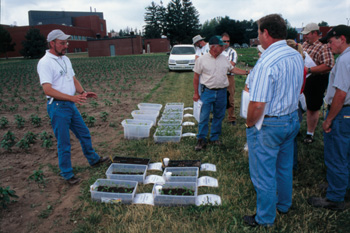 In the past decade, much literature and annual meeting agendas have sought
to improve plant emergence and stands by focussing on various agronomic traits.
Seed-to-soil contact, planting depth and densities are just some of the parameters
that have been examined. But what of imbibition?

Only in the past two or three years has the word come up in conversations.
Yet it remains a singular and vital component all its own: without imbibition
there can be no germination.

Greatest influence on soybeans
Without question, soybeans have the greatest challenge when it comes to imbibition.
In corn and wheat, soil temperature is not the limiting factor it is in soybeans.
Germination can occur in wheat at around two degrees C while in corn, it happens
at around 10 degrees C. But soybeans require soil temperatures closer to 12.5
degrees.

"For soybeans, we say anything under 10 degrees C soil temperature, which
is the water temperature, is suspect," says Horst Bohner, soybean specialist
with the Ontario Ministry of Agriculture, Food and Rural Affairs in Stratford.
"But the truth of the matter is, I've found that in field conditions, it
really needs to be under five degrees C before we really see any damage. A cold
rain soon after planting often causes the worst damage."

Another factor in why imbibition has come to the fore in 2005 is that sufficient
moisture has not been a problem for most of Ontario for the past four or five
years. In fact, some springs bordered on being too wet. But 2005 confounded
planting in many regions with a dry start to the season, interrupted briefly
by some snow, then another extended dry period.

"Most growers are aware that if you're planting into dry soil, the seed
is not going to grow, but they might wonder why it's not growing," says
Dr. Istvan Rajcan, a soybean breeder with the University of Guelph. He calls
germination a multi-step process which involves dissolving enzymes in the seed
coat. "They start breaking out the reserve matter, the storage material
such as oil and starch, for the new seedling to grow and unless you have water
that will dissolve and activate those enzymes, you're not going to get any germination
at all."

Process studied and illustrated
To provide a visual demonstration of the effects of cold temperatures on imbibition,
Bohner worked to determine the level at which soybeans may be damaged. In 2004,
he planted seeds from the same lots at the same time in four trays. Three trays
were planted then placed individually in a refrigerator for eight, 12 and 24
hours before being removed and allowed to grow under normal temperatures for
the rest of the three week study period. The fourth tray was warmed for eight
hours, then refrigerated for four days, after which it was returned to normal
for the remainder of the experiment.

"In that case, there was no damage whatsoever, because during that initial
eight hours, the seeds had taken in a good amount of the water and they were
fine," explains Bohner, adding that a soybean seed must take in 50 percent
of its weight in water for germination to begin.

Another illustration of power
For Peter Johnson, it is the power of the process he finds so 'awe' inspiring.
"If you put a dry seed in a block of Plaster of Paris, and put water in
the bottom so the Plaster of Paris conducts the water up yet stays 'brick' firm,
the imbibing bean seed will physically break the Plaster of Paris," says
Johnson, cereal specialist with the OMAFRA office in Stratford. He recalls how
impressed he was seeing it first-hand in an introductory plant physiology experiment
at university. "That power is just phenomenal."

Asked why he thinks imbibition has come up in conversation in 2005, Johnson
suggests that growers have a vague understanding of its importance as part of
the germination process. Researchers understand it a little better, he says,
but may not grasp everything that is happening along the way. "We know
that when the water's too cold, it has a negative impact on cell wall integrity
and on the enzymes in the plant, and that affects vigour," says Johnson.
"If you plant earlier under good conditions, you build a bigger plant before
it comes to flower. It's like having a bigger factory for photosynthesis before
you start flowering, and you get bigger yields."

Bigger yields also drive growers to plant soybeans earlier. "Twenty years
ago, guys didn't think of planting soybeans before the 20th of May, that was
unheard of," he recalls. "We've pushed them to the 5th of May and
suddenly the soils are too cold."

Another point Johnson makes is the region where soybeans can be grown has expanded
greatly, beyond Lambton-Kent-Essex to as far away as Ottawa, Thunder Bay and
New Liskeard. -30-

Imbibition vs seed priming
Researchers have been trying their hand at introducing seed priming
into field crops in the past. But one thing continues to confound their efforts:
cost.

One thing to keep in mind about the two is that they are not one in the same.
Imbibition is a natural process whereas seed priming is artificially induced.

In soybeans, seed priming might work if not for the cost barrier. But in corn,
the strike against priming is that the process would wash off any seed treatment
that has been applied.

"So now there are two problems: you don't have your seed protection and
what do you do with the wastewater out of that vessel because it's now a disposal
issue," says Peter Johnson, recalling a project done some years ago with
the Middlesex Soil and Crop Improvement Association. "We found it more
difficult to work with because the bean seed tended to be a little rubbery from
the priming process. It wasn't dried right back down, so it didn't flow as nicely
through a drill."

Priming does have its acceptance in the vegetable crops side, where revenues
are higher, and costs of priming can be recouped more readily. "It's very
expensive and we just don't get the payback," says Horst Bohner, referring
to its use in field crops. "Many of these things that worked out in the
lab worked out differently in the field." -30-