Saskatchewan pulse growers have reason to be excited about the future: pulse breeding has taken a dramatic step forward, thanks to the use of Implementation of Markers in Pulses (iMAP) technology.

Traditional plant breeding can take up to 10 years, but iMAP technology allows researchers to analyze DNA “landmarks” in genomes to speed up and enhance breeding, meaning new varieties are available faster.

In 2010, Saskatchewan Pulse Growers (SPG) invested $2,678,508 in a project investigating the use of iMAP technology in pulse breeding. The project wrapped up in late 2014, and according to project lead Bunyamin Tar’an, it yielded extremely positive results.

Tar’an is an associate professor and Agri-Food Innovation Chair at the University of Saskatchewan’s Crop Development Centre (CDC). He says that before 2010, Saskatchewan was behind in the use of molecular tools in pulse breeding compared to other crops, even though Saskatchewan is the world’s leading producer of pea, lentil and chickpea.

“The high throughput molecular technology has been around since mid 2000s, but with only very little use in pulses within our program,” he says. “iMAP technology allows us to use molecular tools in selection, so instead of conventional screening alone and following lines with uncertainty, now we can do that more effectively and efficiently when we’re selecting parents in crosses and following their progeny.”

Tar’an’s project, which ran until winter 2014, was solely funded by SPG. Research work was conducted in collaboration with the National Research Council’s Andrew Sharpe.

According to SPG’s director of research and development, Lisette Mascarenhas, SPG appreciated that outcomes of this project had a strategic fit with organizational research and development priorities. “It was of interest to the growers,” she says. “It sets up the path to improving the genetics of pulses in an efficient manner. This means that new variety development is better streamlined and more productive.”

One practical example of the application of iMAP technology is in the selection of imidazolinone (IMI) herbicide resistant chickpea and lentil in the breeding program. “First we have to find out what is causing the plants to become tolerant to the herbicide. Then we know the genes, and what mutations or changes in the sequence make the plant resistant to IMI,” Tar’an says. “Then we develop a marker called KASP [Kompetitive Allele Specific PCR], targeting that one single nucleotide.

“So you make the crosses, get the seed, scratch the seed, get the DNA, and then test it for that particular DNA sequence – and you know exactly whether the plants will be susceptible or resistant to IMI with 99.9 per cent accuracy.”

Tar’an says the project has revolutionized pulse breeding in Canada, and growers are the primary beneficiaries, although processors and the public will also benefit.

“Eventually what this will mean to the growers is delivery of improved cultivars more quickly, like the example of herbicide tolerant chickpea. That’s the end point,” he says. “We aim to improve the traits that are important to farmers, but we also like to see improvement in the nutritional value of the product. So that will benefit people globally, here and abroad.”

Using iMAP technology, Tar’an’s team at CDC collaborated with almost 50 colleagues from dozens of institutions globally in the project, many of which contributed funding to the shared effort. Now that the chickpea code is “cracked,” breeding programs around the world can use that information to improve, among other things, carotenoid concentration in chickpea.

“There are other traits that are important in other parts of the globe, so they can use that information from the iMAP in their environments,” Tar’an says.

Another very practical result of the project is the University of Saskatchewan’s development of a “KnowPulse” database, which stores sequences and other information of chickpea and other pulses, some of which is available to the public.

Tar’an calls this not an “endpoint,” but rather a good beginning for chickpea breeding. “Now we know where the target genes are, rather than randomly selecting, breeders can use that information,” he says. “This year is the International Year of Pulses, which makes it even more exciting.”

These days, Tar’an’s team is using iMAP technology to re-sequence all the pulse varieties currently in common use, and developing genomic selection for complex and simple traits in chickpea.

“We’re leading globally on pulse research and production,” he says. “I acknowledge the support from the growers here. We really do what we can do to benefit the industry. The main goal here, the ultimate goal, is to keep our industry competitive as a supplier globally.” 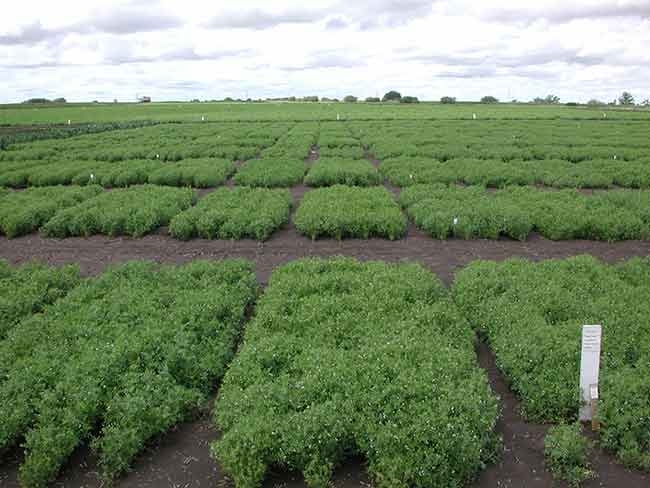