Jul. 25, 2013 - One of the keys to commercialization of advanced biofuels is the development of cost-competitive ways to extract fermentable sugars from lignocellulosic biomass, such as the use of enzymes from thermophiles – microbes that thrive at extremely high temperatures and alkaline conditions – holds promise for achieving this. Finding the most effective of these microbial enzymes, however, has been a challenge.

Researchers with the U.S. Department of Energy (DOE)’s Joint BioEnergy Institute (JBEI) are working with a compost-derived consortium of thermophillic bacterium adapted to grow on switchgrass, a leading potential fuel crop, and using a combination of metagenomic and metaproteomic technologies, the collaboration has identified individual microbial species whose enzymes were the most active in deconstructing the switchgrass biomass.

“Since these activities are broadly relevant to biofuel production, this is one of the first real-world applications being met by combining metagenomics and metaproteomics,” says Steven Singer, director of JBEI’s microbial communities program and a research scientist with Lawrence Berkeley National Laboratory (Berkeley Lab)’s Earth Sciences Division.

Unlike the simple sugars in corn grain, the cellulose and hemicellulose in biomass are difficult to extract in part because they are embedded in a tough woody material called lignin. Thermophilic microbes are believed to be a rich source of cellulase and hemicellulase enzymes for lignocellulosic biomass deconstruction that are active at elevated temperatures and in the presence of pretreatment chemicals such as ionic liquids.

“Natural microbial communities that deconstruct biomass, such as those found in cow rumen or compost piles, are often too complex to decipher roles for individual microbial populations,” says Singer. And as part of their efforts to develop a cost-effective way to deconstruct lignocellulosic biomass into sugars for fuel, researchers cultivated the switchgrass-feeding, compost-derived consortium of thermophiles.

“Using pretreated switchgrass at temperatures up to 80 degrees Celsius, we demonstrated that this consortium is an excellent source of enzymes for the development of enzymatic cocktails tailored to biorefinery processing conditions,” says Blake Simmons, a chemical engineer who heads JBEI’s Deconstruction Division and was a member of this research collaboration.

To identify the functional roles of community members within the switchgrass-feeding consortium, Singer, Simmons and their colleagues first used shotgun sequencing, a powerful metagenomics technique that enabled them to determine the metabolic potential of all the members of the consortium. They then used metaproteomic measurements to identify those enzymes, predicted by metagenomic analysis, that were actually produced by the microbial community.

“Doing metagenomics by shotgun sequencing is a bit like raiding a toy store and tossing hundreds of jigsaw puzzles onto a pile,” says Patrik D’haeseleer, a computational systems biologist who holds appointments with both JBEI and the Lawrence Livermore National Laboratory and is lead author of the PLOS One paper.

“Each individual puzzle piece may carry some useful information, but you only start to see the bigger picture once you reassemble the pieces,” D’haeseleer says. “Our collaborators at JGI used deep sequencing of millions of small pieces of DNA, and generated a partial assembly based on direct matches between the pieces. We developed a novel phylogenetic binning method to separate those partially assembled pieces into the major bacterial genomes in the consortium. This allowed us to then model the metabolic potential of all those members of the consortium.”

“By leveraging the unique capabilities of the JGI and EMSL with those at JBEI, we’re developing a more comprehensive functional understanding of how microbial consortia work to breakdown lignocellulose, and identifying the genes and enzymes that are responsible for this deconstruction,” Simmons says. “The list of genes and enzymes generated by this study has been placed into our expression pipeline and are being used to develop optimized cocktails that are capable of generating high sugar yields from pretreated lignocellulosic biomass.”

For more information, please visit the Office of Science website at science.energy.gov. 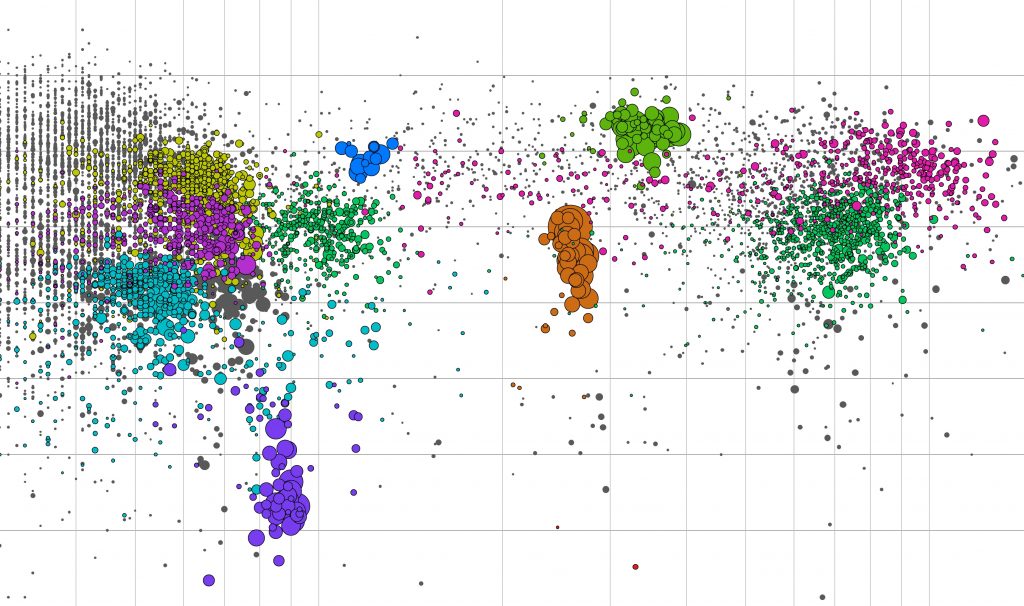 This splatterplot is a visual representation of a bacterial metagenome. Researchers with the U.S. Department of Energy are using genomic techniques to identify microbes that could be used in biofuel processing.
Print this page